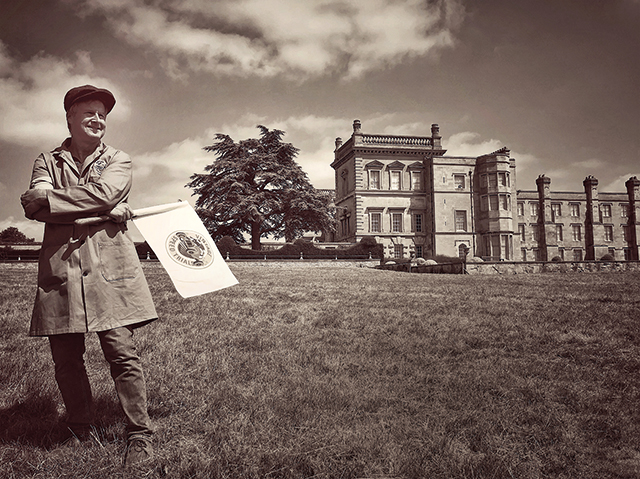 Ticket Information:
Vintage Speed Trials are expecting a bumper crowd on 26th August and tickets are available on the website: www.speedtrials.co.uk and also from Mother Nature, Bristol Arcade, Sleaford and The Brownlow Arms in Hough on the Hill. Vintage Attire Appreciated (though not obligatory)

It is more than 100 years since the engine roars of period racing cars and motorbikes were heard from the track at Grimsthorpe Castle but that silence will be broken once more this August Bank Holiday Sunday.
The parkland surrounding Grimsthorpe Castle initially played host to Lincolnshire Automobile Club on a summer day in 1903 when Sir Hickman Bacon, the founder of the club, and his fellow pioneering Edwardian car and motorbike enthusiasts met for the first time to test their vehicles. These ‘Reliability Trials’ continued until 1911 and gave owners the chance to compete against the clock as well as fellow club members.

The expertise to recreate the atmosphere and authentic feel of the pre-war motoring era for drivers, restoration enthusiasts and spectators alike has come from a company called Vintage Speed Trials Ltd. Richard Powell, managing director and fellow directors Ian Bancroft and Mark Boswell, met while working on a previous event in the county.

Richard explained: “Lincolnshire has a well-documented but not so well known pre-war heritage as a county with several nationally significant race and speed trial tracks. In their day they drew crowds in their thousands to these venues. Mansfield Wilkinson’s Cadwell Park and the Blyton Park Circuit near Gainsborough are two still in operation today.

“Grimsthorpe Castle is an ideal location for our inaugural event and we are most grateful to Sebastian Miller and the Grimsthorpe Estate for supporting our ambitions for the day. Not only does the deer park contain this sinuous half-mile track with a start line by the lake, which then climbs gently to a spectacular finish line besides the Castle, the parkland is a ‘Capability’ Brown designed landscape and the sloped embankment in front of the Castle will give spectators an unrivalled view of the track and whole event.”

Sebastian Miller, managing director of the Grimsthorpe and Drummond Castle Trust, said: “When Vintage Speed Trials approached me, I felt like this was the perfect time to recreate the original Speed Trials held at Grimsthorpe. It’s especially fitting as Grimsthorpe is so close to Bourne, one of the traditional homes of motoring. At Grimsthorpe, we want to honour the past and our distinguished history at the same time as having an eye on how we can evolve for the future – an ethos we share with Vintage Speed Trials. I’m immensely excited about the event in August and am looking forward to a very special day.”

Grimsthorpe Castle is less than five miles from Bourne, which has its own rich automobile history as the home of racing driver Raymond Mays and his Bourne based ERA and BRM companies. The Bourne Motor Racing Club has staged its own events to mark anniversaries of Mays’ accomplishments and his beautiful machines and is talking to Vintage Speed Trials about how this heritage can be celebrated this year, and also in the future.

On Sunday 26th August participants, visitors and competitors will be able to enjoy a unique period aesthetic to the day. Flip Redman, Vintage Speed Trials’ marketing manager, explains: “While we are concentrating on pre-war vehicles on the track and the driver’s paddock, all classic car owners and their vehicles are welcome into the exclusive Classic Car Park. We are planning a concourse of some early Edwardian models which is the era of the racing history of the site.”

There will be plenty of space for visitors to enjoy their own picnics while watching the trials but you will also be tempted by locally based food companies on hand offering Lincolnshire produce of their own; pulled pork and other delicacies from Grasmere Farm, Market Deeping, refreshing ales by Lincolnshire Brewing Company as well as ice creams and soft drinks. Vicky Giles will be there with her vintage clothing stand as well as Garage of Old auto jumble.

In keeping with the spirit of those early scratch races, marshalls will patrol in brown dust coats, a vintage commentary caravan will be decorated with bunting and everyone is invited to wear their own vintage outfit (although this isn’t obligatory). The day will transport visitors back to the pre-war period of British Motor Racing.

Entries are now being taken for pre-1939 vehicles to enter the speed trials which will be tested three times up and down the track.

Richard Powell said: “Amongst the car entries this year we are pleased to see the 1911 Wolseley of Roger Twelvetrees, a regular supporter of our group. This car represents a very early contender for a speed record, built by the Wolseley racing department to be the first car to reach 100mph.

“Marcus Black once again brings his very rakish and typically French and very quick 1939 Talbot-Lago, whilst his father is not far behind in a deceptively powerful 1912 Sunbeam; both regular competitors at Goodwood revival. Adam Moody is bringing along a rare and extremely beautiful Alfa 6C from 1928. Andy King, a well-known MG specialist from Leicestershire, is driving ‘Cream Cracker’, an historic competition MG PB, with a history file one can only dream of.

“And last but not least our oldest and remarkably a car manufactured locally at the start of the century: a 1901 ‘Pick’, all of 4hp.

“We love Edwardian cars. What they lack in performance they make up for in elegance and this is what the event is all about – transporting our guests back to an unhurried era.”

As well as the spectacle of these magnificent racing machines against the backdrop of one of the county’s finest stately homes, there is also the opportunity to look around Grimsthorpe Castle and its beautiful gardens and parkland. There is something for the whole family and perhaps, if you are lucky, the chance to get your hands dirty as you look beneath the bonnet of one of these classic machines.

VST Bugatti at Grimsthorpe from Outhouse Filmworks on Vimeo.