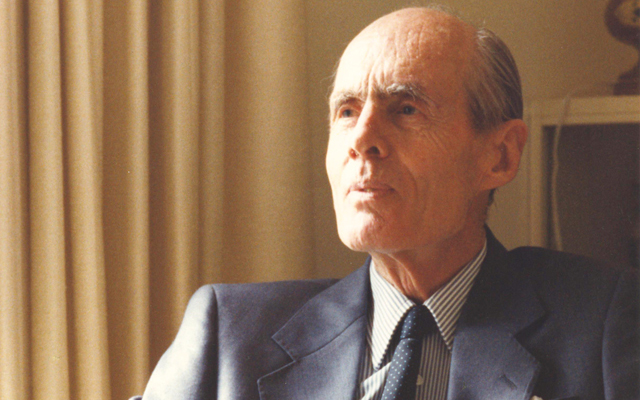 Group Captain Leonard Cheshire, one of Bomber Command’s most courageous and fearless leaders of World War II, after completing 102 missions, was awarded the Victoria Cross in July 1944 – one of only thirty-two airmen to win the medal for an extended period of outstanding effort and sustained courage, rather than for a single act of valour.
His citation noted that “In four years of fighting against the bitterest opposition, he maintained a standard of outstanding personal achievement and supreme contempt for danger. Cheshire displayed the courage and determination of an exceptional leader”. He had also become the most highly decorated officer in the RAF.

After his initial posting to 102 Squadron at RAF Driffield in Yorkshire, flying Armstrong Whitworth Whitley bombers (where he was awarded the DSO for flying his badly damaged bomber back to base), Cheshire, by now a Squadron Leader, saw spells with 35 Squadron and 76 Squadron, both of which were operating the new Handley Page Halifaxes.

When he joined 76 Squadron, it was at a time when the Squadron was suffering high casualties and a consequent deterioration in morale among the crews. Cheshire ordered an improvement in the performance of the Halifaxes, which entailed the removal of all weighty non-essential equipment, including the mid-upper and nose gun turrets. The bombers were thus allowed to fly faster and higher. As a consequence, with fewer losses of aircraft and crews, there was a marked improvement in morale.

But when, in March 1944, by then the youngest Group Captain in the RAF, Cheshire became Station Officer Commanding RAF Marston Moor in North Yorkshire, he found the job was not to his liking, so he pressed for a return to an operational command.

His agitation paid off in September 1943, when he was posted to 617 Squadron based at Scampton in Lincolnshire. The Squadron, made up of hand-picked crews, all volunteers, had been formed for one purpose only, and that was to develop, under Wing Commander Guy Gibson’s command, the extreme low-level flying techniques required in order to drop Professor Barnes Wallis’s famous ‘bouncing bombs’ on precisely the right spot on each of several dams in the Rhur valley.

The first operation, which became universally known as the ‘Dambusters’ raid, was carried out on the Moehne dam, under Gibson’s leadership, on 17th May 1943. For his part, which called for supreme courage, Wing Commander Gibson was awarded the VC.

But now, under Cheshire’s command, 617 Squadron was required to develop more dangerous techniques, calling for even more precise low-level precision bombing at night in order to drop Barnes Wallis’s newly invented 22,000 pound (ten ton) bomb from a modified Lancaster with extreme accuracy. Pilots had to be trained to fly to limits of 100 feet, or even lower. The enormous cost alone of making such a bomb meant there was little margin for error.

The prospect of commanding 617 Squadron with all the obvious challenges it offered, had such appeal for Cheshire that he agreed to drop a rank to Wing Commander in order to take up the post. Using the extremely fast de Havilland Mosquito in a Pathfinder role, and the even faster P-51 Mustang fighter which he borrowed from the Americans, he immersed himself completely in the highly dangerous technique required to perfect the art of low-level target-marking by flares at night.

In doing so, the main bomber force were able to see their targets more clearly and drop their bombs more accurately. Under his leadership, the Squadron became highly specialized in precision bombing and as a result achieved remarkable results when asked to take out specific targets.

One notable raid was on the Gnome-Rhone aero-engine factory at Limoges, 200 miles south-west of Paris. The War Cabinet had previously vetoed the raid because there were 300 French girls working at night there and the factory was also close to French homes. Cheshire guaranteed that not one single French home would be touched.

Twelve Lancasters reached Limoges just before midnight. After making four dummy runs over the factory from as low as fifty feet to warn the girls to get out, Cheshire dropped clusters of marker incendiaries directly over the target. During the following ten minutes, the main bomber force dropped nine 12,000 pound deep penetration bombs from 10,000 feet right on the roof of the factory. Some time later, a message was received in England from Limoges on behalf of the factory girls, thanking the RAF for its considerate warning.

But there was one final mission to come. As the official British observer, Cheshire was asked by Prime Minister Clement Attlee to witness the nuclear bombing of Nagasaki by the Americans on 9th August 1945, from the B-29 support aircraft, Big Stink, which resulted in a death rate estimated at 60,000 to 80,000. This was three days after the first atomic bomb, equivalent to 20,000 tons of TNT, was dropped on Hiroshima, killing an estimated 90,000 to 166,000 people.

The Nagasaki raid brought about an immediate surrender by the Japanese, thus bringing an end to World War II. It is significant that, after witnessing the horror of Nagasaki, Cheshire was quoted as saying “. . . then I for one hold little brief for the future of civilization”.

Cheshire married twice. On 15th July 1941, while on a few weeks’ leave in New York, he met and married Constance Binney, twenty-one years his senior, who had succeeded Mary Pickford, America’s top film star in popularity in 1922. Unfortunately, the marriage was short-lived and childless, but Constance lived to a great age, dying in New York City at the age of ninety-three. In 1948, Leonard Cheshire founded the charity now styled Leonard Cheshire Disability, providing support to disabled people throughout the world. It is one of the top thirty British charities.

On 15th July 1959, when he was forty-two years of age, Cheshire married Sue Ryder in the Roman Catholic Cathedral in Bombay. Sue was a Roman Catholic convert and humanitarian, whose international charitable work was already well established. At the time of their marriage they established The Ryder-Cheshire Foundation, which now mainly operates in two fields: the rehabilitation of disabled people through Ryder-Cheshire Volunteers and the prevention of tuberculosis through Target Tuberculosis. Together with their two children, Jeremy and Elizabeth, they made their home in Cavendish, Suffolk.

After dedicating the rest of his life to supporting disabled people, together with lecturing on conflict resolution, Leonard finally succumbed to the effects of Motor Neurone Disease and died in 1992 aged 74. He is buried alongside his wife in Cavendish. Queen Elizabeth II paid a personal tribute to him in her Christmas Message that same year and the amphitheatre at the National Arboretum in Staffordshire is dedicated to Leonard Cheshire’s memory – one of the great humanitarians of our age.