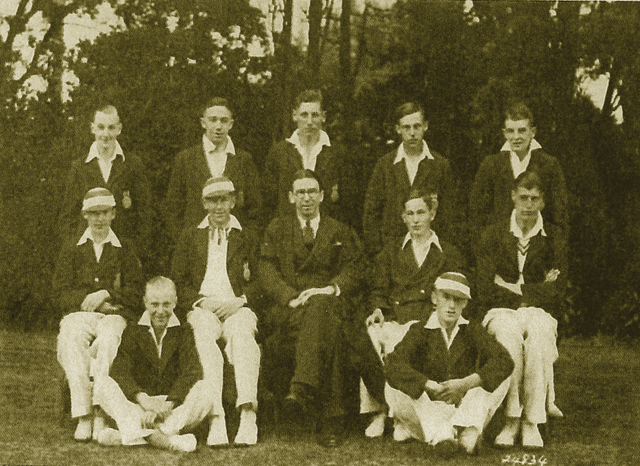 Henry James Herbert Dyer was born in Leamington Spa in 1902, the son of a Coop branch manager. He attended Leamington College before going to Keble College, Oxford where he was awarded an MA degree. After Oxford he
studied law at Lincoln’s Inn and was called to the bar in 1931.
He taught for a short time in Huntington, Coventry and Bradford before he became Headmaster of Queen Elizabeth’s Grammar School, Alford in 1935, a post he held for thirty-two years. Rather strangely, to his wife and family he was known as Peter, but to the education, business and local government communities he was always ‘HJH’.

Dyer walked into quite a difficult situation at Alford. This was a time of great change in education and there were tensions amongst the staff. But HJH proved to be a very good Headmaster in the traditional style, leading by example and creating a fine school which produced many who went on to achieve high office in numerous different professions.

Cricket played an important part in his life. As a bowler he had a seriously ferocious run-up which batsmen found quite intimidating but this was not matched by the accuracy of his delivery. He was a lifelong supporter of Warwickshire County Cricket Club but his support for the school cricket team was much more hands on and it was sometimes felt that his enthusiasm got the better of him. When umpiring it is claimed that far more opposition batsmen were given out lbw than were Alford boys.

Mr Dyer was appointed a Justice of the Peace in 1944 and two years later became Chairman of Alford Urban District Council. In 1951 he joined Lindsey County Education Committee and was appointed President of the Incorporated Association of Headmasters in 1958.

HJH had a rather colourful political career. In the early 1950s he stood, unsuccessfully, as Liberal Parliamentary candidate for Louth. In the next election he stood, equally unsuccessfully, as a Labour candidate. He was eventually elected to the County Council as a Conservative and to East Lindsey District Council representing the Mablethorpe Ward. He became Chairman of East Lindsey District Council and remained a Councillor until 1984.

An elderly people’s complex in Mablethorpe was named Peter Dyer Court in recognition of his service and the affection in which he was held.

HJH was a wonderful Headmaster and a dedicated public servant but there are plenty of stories out there about his real or imagined eccentricities. He was in the habit of cutting the cricket wicket with his own motor mower and did so at very high speed causing great amusement. He would often cycle into town or to court and then walk back to school forgetting the bike. A young pupil would then be sent out to find and recover the machine. And he did not always use his own bicycle, he would simply use the nearest one available, often belonging to one of the pupils.

When he did acquire a car in the late 1930s his driving ability left a lot to be desired. Having decided to take the car to France, he drove around Alford on the wrong side of the road to get used to driving on the right. If he was observed about to leave the school by car, the pupils would gather round to see which piece of furniture in the school grounds he would hit. There is a legend that he answered the telephone by saying “Dyer ‘ere” but I can find nobody who will actually admit to hearing that; maybe it was all just a schoolboy’s joke. HJH Dyer died at Alford in 1995.