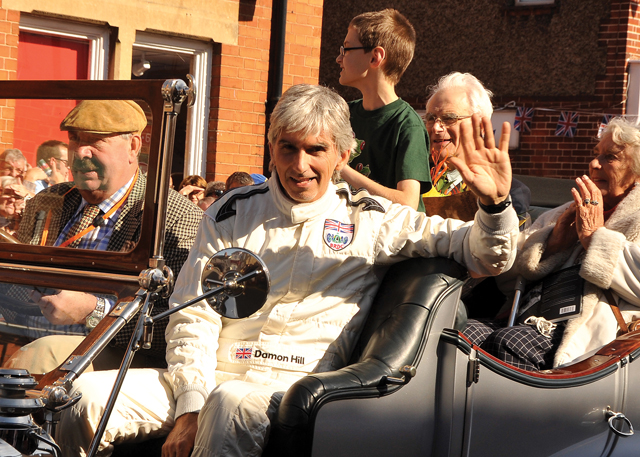 Half a century since BRM’s world win

Brilliant sunshine and many famous faces came out to celebrate the fiftieth anniversary of Bourne based British Racing Motors (BRM) winning the Formula 1 World Championships with racing legend Graham Hill at the wheel. Graham’s World Champion motor racing son, Damon Hill, drove his father’s winning BRM P578/1 through the crowd lined streets of Bourne while other famous faces from the world of motor racing joined the parade of vintage Formula 1 vehicles.
Raymond Mays was the son of an agricultural fertiliser manufacturer and wool merchant who first followed motor sport while at Oundle School and later built a considerable reputation and set many records as a hillclimber. Before the Second World War Raymond Mays drove Vauxhall Villiers, modified by his talented engineer and designer friend, Amherst Villiers. These cars evolved into the first ERA, the R1A, a single seater, super charged car, based on a Riley. The outbreak of war put paid to all motor sporting activities but gave Mays chance to formulate the idea for a fully fledged Grand Prix machine. After the war, with a consortium of leading members of the motor industry, Mays set about producing what he felt would be a world beating racing car.

The BRM factory was set up in Spalding Road, behind May’s Eastgate House family home, in a building known as The Maltings. Some of the old ERA workers were also involved with BRM and the perimeter track at Folkingham Aerodrome acted as their test circuit.

The first engine design was a 1.5 litre supercharged V16. Peter Berthon, one of the original ERA team had been working for Rolls Royce, Derby during the war and he and Rolls Royce as part of the consortium were charged with producing this using a centrifugal supercharger design normally found in aircraft engines. The first car was built in 1949 but the engine performance was poor and the management of the company stifled in layers of decision making. In 1952 the company was bought by two of the consortium members, brothers Sir Alfred and Ernest Owen, of industrial group, Rubery Owen.

The potential of the V16 was never realised and by the mid 1950s a new four-cylinder engine had been developed and fitted into a sleek bodied P25 chassis. Sir Alfred Owen made it clear that there would be time limits on the aspirations for his investment and expected no less than success. Jo Bonnier delivered with a win at the 1959 Dutch Grand Prix while Stirling Moss, in a privately owned P25, finished second in the British Grand Prix in the same year. The P25 was one of the last competitive front engined cars and the next BRM had the engine mounted at the rear. A purpose built, P48 model was built in 1961, followed by the P261 in 1963, the same year that Graham Hill swopped his allegiance from Lotus to BRM.

Under Graham Hill’s influence, Tony Rudd was promoted to chief development engineer and Raymond Mays by this time mostly had a PR role. So began the most successful period for BRM, with Rudd ironing out some of the problems that had hindered the cars and the signing of American Richie Ginther as the number two driver.

The 1962 season saw legendary battles between Graham Hill and Lotus’ Jim Clark but finally Hill took the chequered flag at East London, South Africa to become World Champion in a car which also brought the Constructors’ Championship back to Bourne.

These heady days were never repeated although in 1965 up and coming Scottish driver, Jackie Stewart, was signed as number two to Hill. Stewart won his first Grand Prix at Monza that year in a BRM P261.

The decline of BRM over the next decade is a sad story, before the final shutting of the factory doors in 1977, but there is a legacy of vehicle restoration and tuning to be found in Bourne which still resonates the sound of V16, V8 or V12 engines in the town.