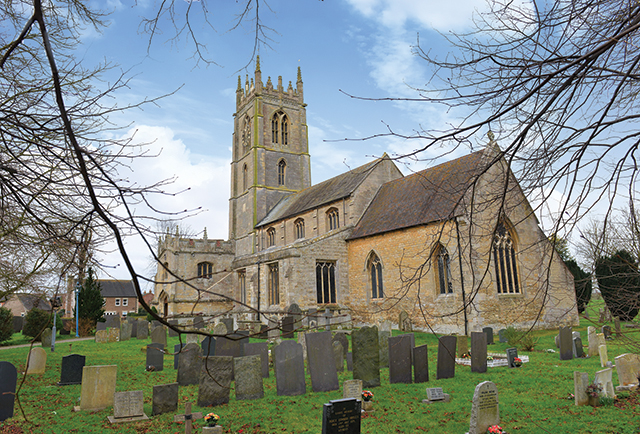 The small south Lincolnshire village of Folkingham is situated on the busy A15 road between Lincoln and Peterborough.
But if the travellers just paused a while they would see there is more to this commuter village.

It has a history dating back to the eleventh century, with several historic buildings still standing, a close-knit community and an active parish council which has been campaigning for traffic calming measures to be introduced into the village. It also has a village store, a pub/restaurant and a well-used village hall.

Folkingham appears in the Domesday survey of 1086 as Folchingeham, Folchingham and Fulchingeham. The place name seems to contain an Old English personal name, Folc(a), and ingaha-m, meaning the ‘village of the people of’.

A castle was built in the twelfth century by Gilbert de Gant, Earl of Lincoln and enlarged by Henry Beaumont in the fourteenth century. He was given a licence to crenellate it in 1312 and the last documentary record of occupation dates from 1372. John Leland described it as a ruin in 1535, in which state it survived until the Civil War.

The site was later used as the village House of Correction or minor prison. The surviving Grade II* listed buildings consist of the original nineteenth-century governor’s house and gateway, dating from 1808 and 1825. It was closed in 1878 but was taken over in about 1980 by the Landmark Trust, who converted the gateway into a holiday home.

The Landmark Trust is a British building conservation charity, founded in 1965 by Sir John and Lady Smith, that rescues buildings of historic interest or architectural merit and then makes them available for holiday rental.

The House of Correction was acquired by the Trust in 1982. The prison was capable of holding up to seventy offenders, who were usually only guilty of less serious crimes such as petty theft, disorderly conduct or idleness.

There had been a House of Correction in Folkingham since 1609 but by 1802 it was not in good repair and work began on a new one in 1808. It was built on the site of a castle which had been abandoned since the sixteenth century and it was decided that a new imposing gatehouse was needed to intimidate the new inmates as they arrived.

It was eventually closed in 1878 and it was sold to a builder, who pulled down the outer wall and turned the prison buildings into cottages.

In the 1960s the cottages were declared unfit for habitation and were demolished, leaving the gatehouse, which was saved by Sir Arthur and Lady Petersen in 1965 and eventually was passed on to The Landmark Trust.

Clerk to the Parish Council Emma Walken said: “Folkingham is a very historic village and we have a very good historical society. There is plenty going on. We have the New Inn which is doing very well under new management and serves very good home cooked food, Folkingham stores which is a shop and tearoom and we have a fish and chip van that comes to the village twice a week, and a fresh fish van once a week.

“The village hall hosts regular events and activities and we have a newly renovated playground and sports area, which is used by Rippingale and Folkingham football clubs.

“The big issue for the village is traffic and the parish council has been most active in introducing traffic calming measures going through the village.”

In the late eighteenth century Folkingham market place was used for stacking timber. Around it was a horse pond, a market cross and a small town hall. The market place was divided by chains into areas for sheep, cattle, horses and poultry, and for the sale of farm produce and other wares.

In 1788 the third Richard Wynne, then lord of the manor, was in financial difficulties and sold off the estate to Sir Gilbert Heathcote, whose great-grandfather, the first baronet, was a member of Parliament, Lord Mayor of London and governor of the Bank of England.

When Sir Gilbert acquired the estate he wanted to transform Folkingham into a small market town. His changes included clearing the market place and having it equipped to cater for the stagecoaches using the main London to Lincoln road which passed through.

In 1940 RAF Folkingham, which was located to the south-west of the village, was used as a Second World War airfield by both the Royal Air Force and United States Army Air Forces. During the war it was used primarily as a troop carrier airfield for airborne units and as a subsidiary training depot for the newly formed Royal Air Force Regiment. After the war it was placed on care and maintenance during 1947 when the RAF Regiment relocated to RAF Catterick.

During the late 1950s and early 1960s, the RAF Bomber Command used Folkingham as a PGM-17 Thor Intermediate Range Ballistic Missile (IRBM) base.

Today the remains of the airfield are located on private property being used as agricultural fields, with the main north-south runway acting as hardstanding for hundreds of scrapped vehicles.

Folkingham’s parish church, St Andrew’s, originates from the late twelfth century and was largely completed by the late fifteenth, with restorations carried out in 1825, 1858 and 1860. It is a Grade I listed Anglican church and features decorated style arcades and a mainly early English chancel, with a
Norman pier where there was an opening into a chantry chapel. On the south side of the church are the remains of stocks and a whipping post.

The church is a prominent feature of the village, but is inconspicuous from the Market Place. In 2006 it was damaged when gale force winds blew down two of the four pinnacles, one of which fell onto the roof causing damage costing more than £100,000 to repair.

The village also has a Manor House which is located just off the Market Place in the centre of the village. Initially called Clinton House, it was built by the royalist 4th Earl of Lincoln for his son, Lord Edward Clinton, later to be the 5th Earl of Lincoln and was constructed of stone taken from the castle.

FOLKINGHAM STORE
Folkingham Store provides locals living in Folkingham and the surrounding villages with all the everyday essentials people need, but its appeal is much broader.

The store has a well-stocked convenience store with more than 3,000 items together with a deli stocking a wide variety of local and international cheeses, seafood salads, and specialist pâtés, sauces, olives, pickles and chutneys. Speciality bread comes from two Lincolnshire bakeries together with local fresh meat and pies and snacks. So whether it’s a tin of beans you need or roasted red peppers, you will find it at Folkingham Store

Add to this the ample selection of cards, giftwrap and stationery, together with the introduction of a tearoom where customers can enjoy a pot of freshly made tea or cafetière of coffee and a slice of cake, then they’re sure you will agree: Folkingham Store is more than your average village shop!

PIVOTAL TECHNOLOGIES
Pivotal Technologies specialise in complete lifestyle changing technologies for homeowners, including systems to aid those with disabilities. They can provide a single application for you to control your home, with a bespoke interface that is easy to use.

The interface can be an application on an existing iPad or a custom designed touch panel. Either will enable control of every aspect of your home including lighting, audio, visual, heating, blinds and curtains, access control and security.

Pivotal Technologies can also design, supply and install a single technology including access control, IP-CCTV, blinds/curtains which can operate independently or as part of a complete lifestyle changing system. All the systems they design are fully expandable, to enable them to work within various budgets.

The power of Crestron is at the core of all designs because of its quality interfaces and its ability to be completely tailored to the client’s requirements in terms of how the system can be programmed and operates.

Pivotal Technologies are service driven and the business prides itself on covering every small detail. Services include full design and specification, installation and commissioning plus full maintenance contracts. They ensure all systems blend seamlessly within your home regardless of period or design.