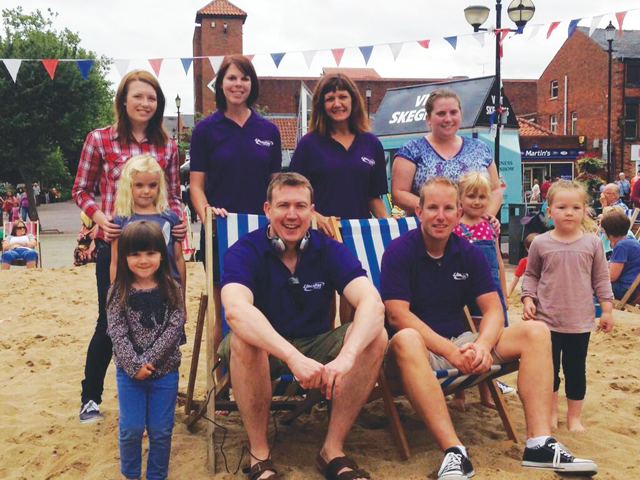 Parts of Lincolnshire and Newark are turning purple and green this month as Lincs FM – with its familiar eyecatching logo – celebrates its twenty-second birthday.
One hundred and two balloons are being released from Lincs FM’s studios on the edge of the River Witham in Lincoln to mark the occasion. They could land just about anywhere, so wherever you’re reading this, look out for them as some contain special prizes.

It’s hard to believe it’s been twenty-two years since the station first launched, with Phil Collins the first artist played on air back on 1st March 1992.

Many things have changed since then, though some stay the same. Now, as then, Andy Marsh can be heard on the late show. Today he plays Classic Hits Monday to Thursday, while his Sunday 10pm show is dedicated to two hours of pure Love.

Eddie Shaw and Sally Elkington are two other names that have appeared on Lincs FM since the very start. Eddie is now head of music, while Sally is still in the kitchen cooking recipes each Tuesday on top of, for the last decade, producing and presenting the Sunday morning Farming Programme.

One of things that hasn’t changed is the station’s focus on being local – something it’s proud of, serving Lincolnshire and Newark day and night. This was proved last year by its huge Big Month Out initiative, taking the station’s presenters out on the road and within ten miles of every single potential listener and advertiser. Each week the team are on the road delivering cakes and flowers, while the news team are reporting on events across the area on an hourly basis. Often, as seen with last December’s serious flooding in Boston, they are there through the night too.

Lincs FM’s director of programming, Sean Dunderdale – who started at the station just three weeks after it first took to the airwaves – told Lincolnshire Life: “We are, and always have been, all about Lincolnshire and Newark. If it’s happening locally then we know about it and we want to share it with our listeners. All our presenters and journalists live locally and being local really is our Unique Selling Point; it’s what makes us different and is the reason why people do tune in to us.”

Recently the station ran a special week of features highlighting the work of Lives Volunteers in Lincolnshire. Lincs FM’s engagement with its audience meant the charity, which was in desperate need of more volunteers, saw a huge increase in people signing up. During the week of the appeal on Lincs FM, LIVES saw more than three times as many people getting in touch. On top of that a number of businesses also contacted the charity, offering donations and support – as a direct result of what they’d heard on the airwaves.

Sean said: “Hearing just how successful the LIVES appeal was – and, importantly, how generous our listeners are – makes it all worthwhile. It’s good to know that as well as entertaining Lincolnshire and Newark, and giving vital news, travel updates and weather reports, we can also give something back, contributing to our area.”

With spring and summer approaching, the station is planning yet more events, though Sean is for now staying tight lipped as to exactly what. He has let slip that there will be a different spin on the Big Month Out, and at the Lincolnshire Show something special that they haven’t tried before – that will, we’re told, bring a new sound to the annual agricultural event. Sean has promised to tell Lincolnshire Life more about it nearer the time.