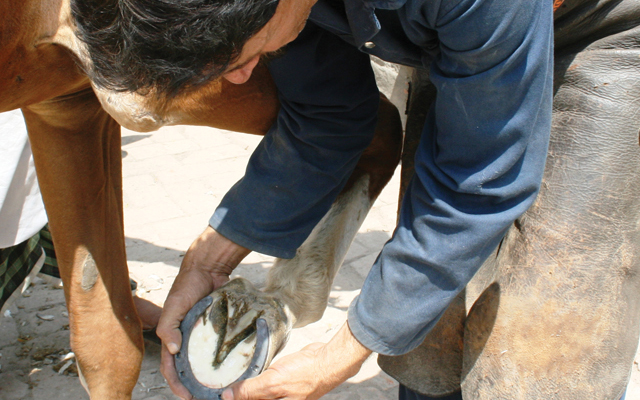 A charity was started in the 1930s to help the equine heroes of World War One. Its work now improves the lives of working horses, donkeys and mules in the poorest parts of the world, and fundraisers in Lincolnshire are lending a hand. Jean Rush finds out about the Brooke Hospital for Animals.
From modest beginnings as a hospital for ex-warhorses left behind in Egypt after the First World War, the Brooke is now an international welfare charity which will reach more than a million working horses, donkeys and mules this year.

The suffering of horses taken into battle by British, Australian and American forces in the 1914–18 war is now well known, thanks to the spectacular success of the West End play, and film, based on Michael Morpurgo’s book ‘War Horse’.

When the conflict ended, instead of being repatriated, the horses were sold into a life of hard labour. Dorothy Brooke, the wife of a British army major general, visited Egypt in 1930 and was appalled to see hundreds of emaciated horses being used as beasts of burden on the streets of Cairo – all having seen service in the war. Back in the UK, she appealed through the press, and public donations poured in to enable her to end their suffering. Within three years, she had set up a committee and in 1934 founded the Old War Horse Memorial Hospital in Cairo, with the promise of free veterinary care for all the city’s working horses and donkeys. Thus the Brooke Hospital for Animals was born.

The Brooke’s function is not only to improve the health and wellbeing of the animals, but to educate communities in how to care for them, and thus benefit around six million of the world’s poorest people – who rely on the animals in order to earn a basic living. There are around 100 million working horses, donkeys and mules across the world, and during the course of their lives it’s estimated that more than half of these animals suffer from exhaustion, dehydration and malnutrition as a result of excessive workloads and limited animal health services. This results in suffering for the animals, and insecure livelihoods for the people relying on them. The majority of working horses, donkeys and mules are owned by individuals who use them to support themselves and their families. The animals are vital to alleviate poverty, assure food security and promote self reliance.

With more than 800 staff around the world, The Brooke provides veterinary treatment and community programmes to promote animal health and wellbeing, and is currently working in Afghanistan, Egypt, Ethiopia, Guatemala, India, Jordan, Kenya, Nepal, Pakistan and Senegal. Veterinary surgeons, community animal health workers and development specialists work with communities so that they understand how to care for their animals, ensuring that they have regular rest, shade and water and are properly loaded. Working animals can be happy and healthy, says The Brooke, if they have the care and respect they deserve. Establishing the root cause of a health problem and preventing it from happening in the first place, is the most effective way to ensure sustainable fitness and wellbeing. The Brooke trains farriers, saddlers, harness and cart makers, and shows animal owners how healthier animals can be more productive.

The animal health teams live in the communities where they work, so they are on hand to ensure good welfare becomes a long-term priority, and to encourage communities to take responsibility for the care and welfare of their own animals. Free treatment is provided to animals through The Brooke’s mobile veterinary teams, and locally trained and based animal health workers ensure emergency treatment is always on hand.

Fundraising is of course a vital aspect of The Brooke’s work, and a devoted team of Brooke supporters was founded in Lincolnshire in 2008. Their activities include book sales, car boot sales, stalls at local fêtes and fairs, and a series of sponsored walks. Members have walked twenty miles along the Norfolk coast, taken part in the Lakeland Trails Challenge in the Lake District, and a ‘GG’ sponsored walk from Grantham to Gelston. The challenge in 2013 was a Trekathon – a twenty-six-mile walk through London’s urban landscape last August, starting at the Olympic Park in Stratford and ending at the Cutty Sark in Greenwich. For further information about the Lincolnshire fundraising group contact Mrs Margaret Trigg on 01400 250758 or email metrigg@btinternet.com.

From its beginnings helping the equine heroes of World War One, The Brooke has grown to such an extent that its goal is to improve the lives of two million equines a year by 2016.