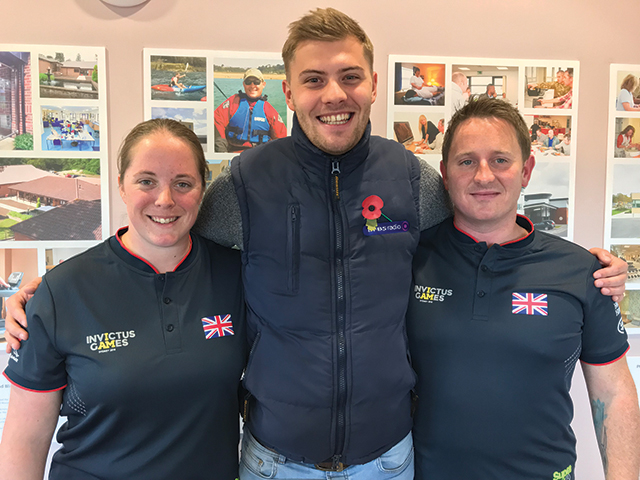 Helping to make a positive impact

Lincolnshire veteran Cpl David Morris is relishing the opportunity to help others on the road to recovery after being appointed vice-captain of Team UK for the 2020 Invictus Games.
David, of Sleaford, took part in the 2018 event in Sydney, Australia, and is now honoured to be representing his country again, this time alongside his brother Antony, who is also part of the 65-strong team of wounded, injured and sick military personnel and veterans travelling to The Hague next year.

David, a Corporal in the RAF since 2000, was diagnosed with severe post-traumatic stress disorder (PTSD) following an incident in 2011, which occurred while he was serving as a survival equipment specialist with the Red Arrows. He was the first person on the scene when pilot FL Lt Sean Cunningham died when his ejection seat initiated while the aircraft he was in was stationary on the ground.

Such was the effect of his PTSD, David said he was left feeling “scared of my own shadow” and “didn’t even want to leave the house”.

It was his brother who encouraged him to apply for the Invictus Games as a way of helping his recovery.

“The power of the Invictus Games is hard to describe to people; it has to be seen to be believed,” said David, “the benefits have dramatically changed my way of life. I am learning to cope with anxiety and how it controls certain aspects of my life.

“I want to be able to manage that level of anxiety which still plays a massive part in blocking me from achieving simple goals, and can often be debilitating, through raising my self-confidence to a point where I actually believe that I can do something without thinking worst case scenario and giving in before I have even tried.

“I hope this will have a positive impact on my children who, on more than one occasion, have missed out on activities because I have suffered panic and anxiety problems.”

Prince Harry founded the Invictus Games in 2014 as a way of using sport to create a positive impact on the lives of injured service personnel and veterans.

Invictus UK is delivered by a partnership of The Ministry of Defence, Help For Heroes and the Royal British Legion, while BAE Systems are sponsoring Team UK for the first time next year, when more than 500 competitors from 19 nations will compete in The Hague starting on 9th May.

David took part in swimming and indoor rowing events in 2018 after encouragement from his brother to enter.

He’d been undergoing Cognitive Behavioural Therapy but was still struggling with stress and anxiety, while his family were incredibly worried about him.

“It was my brother who thought it would do me good to get involved in a ‘have a go’ sports festival and see if I wanted to try out for the games,” recalls David, an RAF recruiter who works in both Peterborough and at RAF Cranwell.

“I chose swimming and indoor rowing as I didn’t want to push myself too much at that stage as I was still trying to come to terms with a lot of things, I had real anxiety issues and struggled to even leave my house.

“But after coming back from the training camps my head didn’t feel so heavy and I was feeling better in myself. When it came to the actual trials, though, it was a completely different environment.

“I remember getting to my swimming event and there was a big crowd. I got called to stand on the block, but I couldn’t do it as I was so worried about the risk of failure and embarrassment, but my good friend Michelle Turner, who has also competed in the games, was pool side and she just encouraged me to get on the block and not worry about anything else.

“I did it, and then it was the countdown – she got me to dive in, and then of course, I wasn’t not going to swim. The adrenalin kicked in and I just wanted to get to the end of the pool. I got a PB and I didn’t come last and then I saw Michelle crying her eyes out. It was a great moment.”

David was selected as a team reserve and took part in more training camps. Then two weeks before the team was due to fly to Sydney, he was contacted to say he was going too.

“It was a real whirlwind, I felt like I was living somebody else’s life, but it was a wonderful experience,” he said.

“After Sydney, I had to set myself goals as I couldn’t risk going backwards. I went out competing with my horse Doris and worked really hard. I was a bit unsure about applying for Invictus again as I’d already done it once, but I knew it would be good for my recovery and that my brother was applying as well.

“I still have anxiety and lack confidence and self-belief, so I wanted to improve that.”

David is competing in swimming, is a reserve for the volleyball team and will face his brother Antony in the 100m sprint, discus and shot put next year and he believes the experience of Invictus Games 2018 will stand him in good stead to mentor those new to the event.

“I was interviewed for the role of vice captain and it was a difficult one – what could I bring to the table? But my whole point this year, the reason why I wanted to have another go was because I knew where I’d come from to get where I am now, and I wanted to promote that to others. I wanted to show them what they could get out of the experience,” he said.

“We all have different reasons and different goals for taking part. Some people want to achieve a medal, others might be glad to get out of the house and into a team environment. I just want to help people achieve their goals – the whole event has such a great message.

“I’m so lucky to have been given this second chance at life and it’s thanks to the Invictus team, my coaches, Help for Heroes, Royal British Legion and my amazing family and friends. Without them, this would not be possible.”