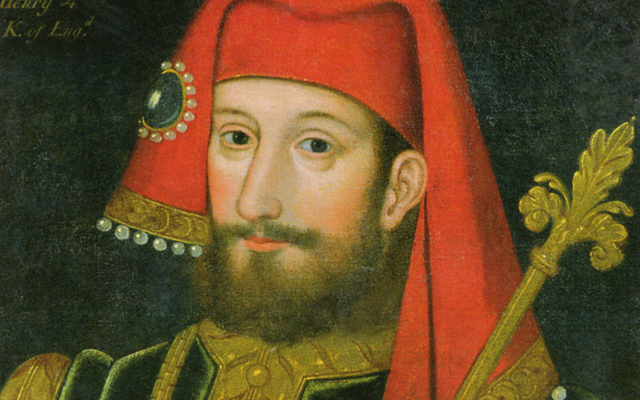 Earlier this year saw the 600th anniversary of the death of Henry Bolingbroke, or Henry IV to give him his more regal title, Lincolnshire’s very own king.
Bolingbroke was so called because he was actually born at the castle of Old Bolingbroke, in Lincolnshire, on 3rd April 1367. ‘The remains of a castle in which an English king was born adds atmosphere to this sleepy village on the southernmost edge of the Lincolnshire Wolds.’ (1)

Bolingbroke is just a tiny village today, located close to Horncastle, and sits below a hill, with a few stones marking the site of the former castle, which was built some 900 years ago and was visited by Geoffrey Chaucer among others. Old Bolingbroke was a prosperous market town in the Middle Ages, but is today a ‘rambling little community of narrow lanes overlooked by low, tree-clad hills.’ (2)

It was when one of the de Lacy daughters, Blanche – heiress to the Duchy of Lancaster – married John of Gaunt, fourth son of Edward III, in the fourteenth century, that Old Bolingbroke came into Gaunt’s orbit and Henry Bolingbroke, his son, came to be born in this place.

The castle must have been quite impressive in its day for Gervase Holles, the Lincolnshire lawyer, antiquarian and politician, described it in the seventeenth century as occupying around one-and-a-half acres, with a moat and ‘four strong forts or ramparts wherein are many rooms and lodgings; the passage from one to another lying upon the walls which are embattled about.’ (3)

Henry and the young King, Richard II, were cousins and actually grew up together, becoming close friends, but it was a friendship that was not to last. Henry actually joined a rebellion as early as 1387 (the Lords Appellant) against the King, but avoided punishment when the King recovered his position. It was as though the King was already blind to the threat posed by his young cousin.

Henry enthusiastically embraced the principles of knightly chivalry and was one of the best at the ‘art’ of jousting. He spent most of 1390 involved in the siege of Vilnius with the Teutonic Knights and went on a pilgrimage to Jerusalem in 1392. In terms of manifesting himself as the chivalric hero, he rather overshadowed the King himself; not always to be recommended.

In 1398 there was a quarrel between Henry and Thomas Mowbray, which looked like it was going to be settled by mortal combat, until the King pre-empted this by banishing both protagonists. The following year John of Gaunt died and the King seized the inheritance that should have been Henry’s. The die was cast.

Henry gathered a small army, landed at Ravenspur, in Yorkshire, and marched south to Bolingbroke. The King, who had been on campaign in Ireland, returned hurriedly to Wales, with Henry heading westwards in pursuit. After capturing Bristol, Henry moved north to Flint, where the King conceded to him at the castle. Henry Bolingbroke would very shortly become Henry IV, being crowned on 13th October 1399.

There couldn’t be two kings of course, so it was inevitable that Richard II would not live long. A failed attempt on Henry’s life was possibly the catalyst for the events that followed. Controversy still surrounds the circumstances of the late King’s death, with some sources claiming that he starved himself, others that he was starved. Either way, he died, with his body bearing no signs of any attack.

Having usurped the throne, Henry could now enjoy the spoils of kingship. It wasn’t this simple, however, for a man who had taken the throne from the anointed monarch now had to withstand several acts of rebellion, almost as a penance for what he had done. Henry was to show, however, that he was made of sterner stuff than the man he had deposed.

The most serious of the rebellions was led by the Northumberland family of Percy who, embittered that the King had not allowed them to ransom some Scots prisoners after they’d seen off a Scottish incursion into the north of England, turned against the King in retribution. With the Scots leader (Archibald Douglas) throwing in his lot with his former opponents and the leader of the Welsh rebels (Owain Glyndwr) also joining in, this was a really formidable coalition ranked against Henry.

Henry faced his opponents at Shrewsbury on 21st July 1403. Casualties were high in a battle, which featured longbow versus longbow for the first time on an English battlefield. The King’s own son, the future Henry V, was wounded by an arrow in the face, yet refused to leave the field of battle.

‘I run before King Harry’s victory, who, in a bloody field by Shrewsbury, hath beaten down young Hotspur and his troops, quenching the flame of bold rebellion even with the rebels’ blood.’ So proclaimed Rumour, the presenter of Shakespeare’s Henry IV Part 2, in the Induction to the play.

There is a church on the battlefield now, the ‘Battlefield Church’ of St Mary Magdalene’s, which marks the approximate centre of the field. This was built by royal charter of Henry IV, five years after his great victory, as an act of commemoration. There is a statue of Henry on the east wall of the church looking down on the scene of his greatest triumph.

They was little peace for Henry after Shrewsbury, as it would be another five years before the rebel figurehead of the Earl of Northumberland finally met his end in a battle at Bramham Moor, in Yorkshire. Shakespeare himself summed it up rather pithily for, ‘Uneasy lies the head that wears a crown.’

Although Henry was finally free of rebellion, the last few years of his reign were not to be ones of unmitigated pleasure, as he suffered increasingly from ill health, possibly epilepsy, which necessitated his son becoming effective ruler on occasions. Henry finally died in Westminster on 20th March 1413.

As for Old Bolingbroke, the castle saw action in the English Civil War, when it was held for the Royalists, although much of the Eastern Counties sided with Parliament. A Royalist attempt to relieve the castle ended only in defeat at Winceby, which led to Old Bolingbroke having to be abandoned in 1643. Only the gatehouse remained for a significant period after this, until it too collapsed in 1815, such ‘that it is difficult to imagine the present fragments as ever constituting a building fit enough to entertain a very great Prince with all his train.’ (4)

When I last visited the castle I found it as described, with remains of the curtain wall and bastions, which were presumably those ‘four strong forts’ that Holles described. Wild flowers grew on the walls and sheep grazed on the other side of the water, presumably what remained of the moat, whilst there were more trees in evidence than would have been the case in Henry’s day. There is more to see today than in the preceding centuries though, as excavations have revealed remains of the gatehouse, towers and curtain wall, with some walls still standing to a height of fourteen feet, where once there were but grassy mounds.

Standing amongst the grassy ruins with only sheep for company it was time to reflect on the achievements of Lincolnshire’s King, a man with a ‘high level of education, justification for revolution, aspirations for international recognition, military skill and political resilience.’ (5)

Henry Bolingbroke has been overshadowed in many ways by the martial achievements of his own son, yet Lincolnshire’s King surely deserves to be better known than he is, for he faced down all of his enemies and defeated them. Lincolnshire should be proud of the gutsy monarch who was born in its county, put the Lancastrians on the throne of England, won his famous victory at Shrewsbury and died 600 years ago this year.