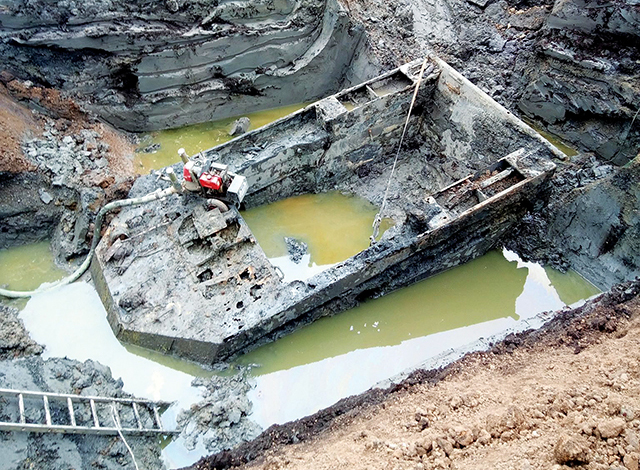 Hero of the floods recovered

Farmer Daniel Abbott, a passionate historian, led the 50-strong team that uncovered the location of the Buffalo LVT-4, near Crowland’s North Bank, and spent five days excavating the 20-tonne vehicle.

It was one of a large number brought to the area in March 1947 to create a temporary dam when the River Welland flooded, forcing thousands of acres of land underwater. When the water was pumped back in, the vehicles weren’t weighed down properly and five floated away. One was recovered at the time while two ended up in fishing pits and the other two sank into a hole – which was located by Daniel and his team.

Following the excavation to depths of almost 30 feet at the end of April, the group were thrilled to discover the Buffalo was still intact, having been preserved by the clay and peat covering it. After removing it from its resting place they paraded the Buffalo through the lined streets of Crowland, back to a secure shed where it is now being cleaned up and treated before a decision is made regarding its future.

“I am over the moon with what we have achieved,” says Daniel. “It’s been a very emotional time – it was such a special moment actually pulling the Buffalo out, especially after so many were saying we would never find anything. I hope the public understand what this means to Crowland.

“We pulled it through the town on May 1st. There were people lining the streets watching, taking photos and I just couldn’t get it out of my head that we had actually found one of the vehicles and managed to dig it up.

“Ultimately we’d like to restore it and have it located somewhere within the town as a memorial to the floods and the herculean efforts made to repair the bank and remove the flood water.”

Daniel’s quest to find the missing Buffalo began three years ago when a local councillor asked if he would like to carry out some research ahead of the 75th anniversary of the floods, which happened as a result of a catastrophic combination of high tides, meltwater and wind surge.

During March 1947 around 30,000 acres of land were submerged by water and homes as far out as Postland Station, the edge of Eye Green, Thorney and Newborough were also flooded.

Thirty 26ft-long LVT-4 Buffalos were brought in to act as flood defences. Several still remain in the ground as part of the area’s flood defences, but many people remained sceptical that those which floated away could ever be located.

Daniel says: “I learnt all about what happened during the floods from my grandparents. I’m 41 and I’ve heard lots of their stories through my lifetime and on the grapevine. I’m very passionate about history and WWII and I was asked to do some research ahead of the anniversary. Having been asked, it was something I took a lot of time over.

“I spent many hours in the library and reading articles and it wasn’t until then that I thought, wouldn’t it be lovely if we could remove one from the ground ahead of the 75th anniversary?

“While I was in Spalding Library, I came across an article that suggested there was one vehicle about 28 feet below ground, so I started doing some more research which helped with the location.

“Last July we were able to get a ground study done and it came up with a big red spot, which we knew had to be the right place. I took the results back to everyone and lots of people offered to help uncover it.”

The day before Daniel got the call to say that an excavator was coming to start the dig, he dreamed about walking into a shed where the Buffalo took pride of place surrounded by other items of memorabilia from the time period.

He added: “I got the call on a Thursday from North Level Drainage Board to say they were coming the next day and by Friday we had found the gun shield, that was the first piece we uncovered and it was in immaculate condition. It was about 10 feet away from the vehicle itself. The whole thing has been covered in clay and peat and has been so well preserved.”

The volunteers dug with their hands as well as machinery and, in all, around 4,500 tonnes of clay were removed during the five-day recovery project, which was aided by North Level Drainage Board, Crowland Cranes and Tears Recovery.

The Buffalo they found was built in October 1944 and used in the Rhine Crossing the following year. It was a personnel carrier, not a tank, and was only three years old when it floated away before being consigned to spend the next seven decades underground.

“What happens now is that we have to knuckle down, get as much material as possible off it, and then get it treated with some anti-rust material, then it will be kept in a secure shed while we think about how best to display it,” explains Daniel.

“My ideal plan is to put it in a museum – although the question is where? I would like it to stay in Crowland, as it is part of Crowland’s history. It’s proved the point to those people who said there was nothing there – they will have to re-write their version of history now!

“We are trying to raise as many funds as possible to restore it and even now as we remove the clay we are finding little written messages like ‘All OK?’ There are still all these exciting little things waiting to be uncovered.”

Keep up to date with the Buffalo recovery and find out how to donate towards a project to create some information boards about the floods by following the Crowland Buffalos community on Facebook.