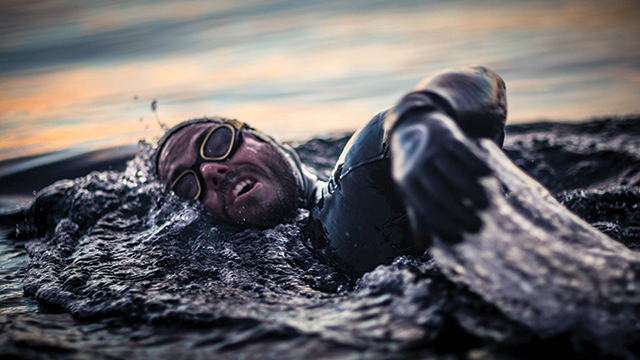 Hero of the Great British Swim

After a staggering 23 weeks at sea Lincolnshire adventure athlete Ross Edgley has become the first person to swim the 1,792 miles around the coast of Great Britain. Kate Chapman hears how he completely pushed the capabilities of the human body in the process.
The 33-year-old from Grantham left the mainland at Margate, Kent, on 1st June and did not step foot on dry land until returning to his starting point 157 days later on 4th November.

During the Great British Swim Ross swam every day, despite suffering extreme wetsuit chafing which scarred his neck, a disintegrating tongue and suspected torn shoulder while his only stoppages were enforced by the extreme winds and waves caused by storms Callum and Ali.

He swam in six-hour stints day and night, taking the six hours in between to rest and recover aboard his support vessel Hecate, skippered by veteran sea captain Matt Knight.

To mark his homecoming Ross was joined in the final stretch of his epic voyage by 400 swimmers from the Outdoor Swimming Society.

“Setting out I knew the Great British Swim would be the hardest thing I’ve ever attempted. I can’t really believe we have done it,” said Ross.

“I was very naïve at the start of the whole thing, and there were moments where I really did question myself. My feelings now are pride, tiredness and relief.

“It’s been a team effort, and it’s thanks to the whole crew, the support I’ve received from the public and Red Bull that I’ve been able to complete it.

“To see so many smiling faces at Margate was amazing and if I can take one thing away from this whole experience, it’s that I’ve inspired people to go out there and challenge themselves, no matter how small that inspiration may be.”

Ross began his career as an athlete playing water polo for Great Britain and later moved into the academics of sport. He graduated from Loughborough University School of Sport and Exercise Science with a first class honours for his dissertation on the different strength and power adaptations to various training protocols.

He wrote The World’s Fittest Book, a UK bestseller, and is co-founder of sports nutrition company The Protein Works and is certainly no stranger to a challenge.

During the past few years Ross has completed a series of feats designed to push the human body to its limits including a marathon while pulling a MINI Cooper, climbing a rope to the equivalent height of Mt Everest (8,848m) in 24 hours and completing a tree-athlon, which involved an Olympic length triathlon while hauling a 45kg log on his back.

The idea for his latest endeavour came about after he attempted to swim between two Caribbean islands with a 45kg log tied to him.

“I come from a very sporty family so I feel like the need to challenge myself is a big part of who I am. After my Caribbean log swim earlier this year there was a bit of unfinished business in the water.

“I’ve always been fascinated by British explorers and it was Captain Matthew Webb (the first person to swim The Channel) who really inspired me.

“Back in 1875 they said no one could swim The Channel because it was just too treacherous but he proved them all wrong. It was the same with this swim, people said it was impossible and that it could never be done, so that’s what really made me want to do it.”

In order to sustain his Herculean effort Ross ate between 10,000 and 15,000 calories per day, consuming calorie-rich, high-carbohydrate foods such as porridge oats, rice pudding, noodles, pizza and pasta as well as coconut oil and nut butters for fats and super green shakes and multivitamins for micronutrients. His swim was also powered by more than 600 bananas.

During his five months at sea Ross’ journey was documented through vlogs and live broadcasts and his efforts captured the heart of the nation – with one wild swimming enthusiast heading out to meet him with a freshly baked cake on her head, while another group of fans visited his boat overnight to leave out fudge for the crew.

“There were so many highlights. At the start of the swim it was just me and the Mayor of Margate, so to come back and to see how it had gathered so much momentum was amazing. Two swimmers from Grantham had also made it down, so that made it feel a little extra special too!” said Ross.

“The Bristol Channel where I swam with a Minke whale for around five miles was also pretty incredible. When it first breached I was quite alarmed so I called to Matt to ask what I should do, but he said it was harmless and to keep swimming. Apparently it took me for an injured seal and was actually guiding me to the shallower waters of Wales.

“And being from Lincolnshire it was obviously a very proud moment to have been back and be able to raise the Lincolnshire flag. We actually entered Lincolnshire just as the sun was coming up, so the sunrise on the Humber estuary was incredible and a really nice way to be welcomed home.

“As for the least enjoyable thing, that was the jellyfish stings, as the pain they caused me at times was just immense. The big one was during the Gulf of Corryvreckan whirlpool, off the west coast of Scotland.

“A giant jellyfish attached itself for thirty minutes to my face in the middle of the whirlpool and just wouldn’t let go. I think it’s good to talk about the worst moments, as it wasn’t always pretty, but the good memories from the swim always outweigh the negatives.”

As well as being the first person in history to swim around mainland Great Britain Ross also broke several other records along the way. He is the first person to swim the length of the English Channel – 330-miles from Dover to Calais – in 32 days, and the first Briton to swim from Land’s End to John O’ Groats (900 miles) in just 62 days. He also surpassed the previous world record for the longest staged sea swim when he completed his 73rd day in the water.

Following his record-breaking swim Ross has been invited to speak at this year’s World Open Water Swimming Association Open Water Summit in San Francisco and once he’s adjusted to being back on dry land he’s hoping to take on even more challenges.

“In terms of bigger thinking, and I know this will sound weird, I’m still not bored of swimming. A few big swims have been mentioned and this is probably the most ‘swim-fit’ I’ll ever be, so who knows? Watch this space,” he smiles. 

For more information about Ross, visit his website www.rossedgley.com