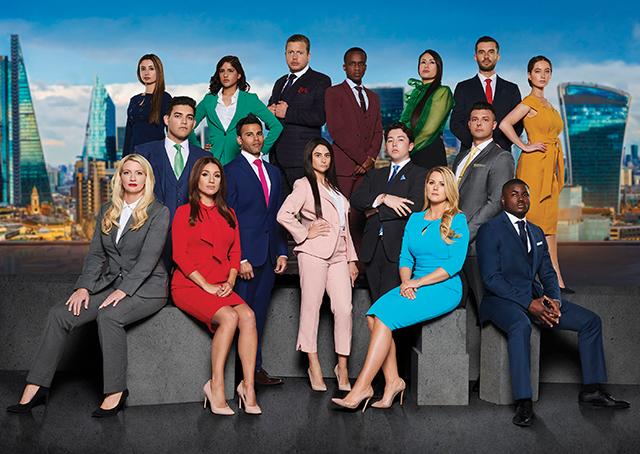 She spends her working life battling it out in the boardroom, but Stamford businesswoman Marianne Rawlins tells Kate Chapman she is hoping she can secure her best deal yet – by winning The Apprentice 2019.

The 36-year-old, who runs her own American-based business Bradley Risk Management, is currently one of sixteen budding entrepreneurs battling it out in the 15th series of the BBC One show to secure a £250,000 investment and a partnership with Lord Sugar.

Marianne, who moved to Stamford from California in 2017, wants to expand her business to the UK and is hoping to win Lord Sugar’s investment to help with the move.

This year’s series has been billed as bigger and better than ever with the candidates set tasks including running a corporate away day on a steam train, designing a theme park ride using the latest technology and traveling to Finland to create an advertising campaign.

“I watched The Apprentice a lot in the US, but over there they changed the format years ago, so it was just celebrities and that’s when I stopped watching.

“When I moved to the UK I realised it was still the same format and there was an investment opportunity available,” says Marianne.

“It’s amazing what Lord Sugar has accomplished having started from humble beginnings; he’s managed to identify opportunities and go in there and capitalise and he invests in business opportunities outside The Apprentice as well.

“He’s always looking to stay on top of things and not go stagnant. He’s very successful and really does want to help people succeed – I’d love to secure his backing to expand my business.”

Marianne moved to the UK a couple of years ago after meeting her husband in California while he was working there. They settled in Stamford and having worked in insurance all her adult life she continues to travel between England and America, to oversee the running of her consultancy.

Her appearance on The Apprentice marks the second in two years for candidates from Lincolnshire. She follows in the footsteps of Khadija Kalifa who made it to the final five last year.

Ahead of the show Marianne admitted she doesn’t have a filter and may need to ‘dial down her American-ness’ and added that she might need to take a step back as she can be too direct.

“I think my strengths are negotiating with corporate clients as that’s what I do for a living across the boardroom table, that’s where we hash it out,” she said.

“I do have to have difficult boardroom discussions as part of my work where it feels a lot like it will in The Apprentice boardroom – so I’m very comfortable in that environment.

“I don’t think there’s one thing though that I’m particularly better at than everyone else – I’m just a decent, solid all-rounder.

“I’m definitely the epitome of ‘don’t judge a book by its cover’ because what you see is not what you get.

“We are definitely a group of people who would never have been introduced if it were not for The Apprentice, but I’ve met some lovely people. We are all very different and I think that’s half the battle – figuring out each person’s strengths and weaknesses and what sets that off.”

The first episode of the 2019 series saw the candidates whisked off to South Africa where they were split into two teams with self-appointed project managers and tasked to set up wine and safari tours.

Marianne was on the winning women’s team and again in the second week when she was nominated to be sub-team leader by fellow candidate Lottie Lion, who had initially been put forward for the role.

The women’s team came out on top again after designing and selling their own luxury ice lollies, which included ingredients of edible flowers and rosemary.

“To be taken to South Africa in the first episode, well we definitely weren’t expecting that, but everything that happens is a surprise – when we’re being taken on a task we never know where we are going, and we were always speculating about what we thought it might be,” adds Marianne.

“I featured more in the second episode as I was our sub-team leader, even if it wasn’t by my own design and in hindsight I think Lottie did me a bit of a favour.

“One of the things that I have found difficult throughout, though, is deciding how to deal with Karren and Claude.

“I didn’t want to be a brown-noser; they are there following our progress to report back to Lord Sugar, what do you say to them?

“We don’t get the chance to see the show before everyone else, so we’re just as excited to watch each episode and see what happens.

“From what I’ve seen so far they’ve done a good job with the editing and showing everyone’s personalities. Only a couple of episodes have aired so far so I’ve not really been spotted when out and about yet – I guess we’ll have to see how that goes as the show goes on!”

Under the rules of the programme Marianne must remain tight-lipped about the outcome and those episodes that are yet to air, but she is hoping her winning form will continue.

“Something I’ve tried to stress throughout is, if we do a good job as a team and put the team first, we won’t even have to fight for our position in this thing – we’ve just got to do a good team job,” she says.

“As for me I am continuing to run my consultancy firm and my expansion into the UK is going ahead – I’m opening some offices in London in the next couple of months and am hopefully going to start with five employees and get this show on the road.

“I love living in England, especially in Stamford, it just looks like it’s straight out of a Dickens novel!

“I absolutely love it, but it’s not the same as Orange County, but I can never say that either place is better as they’re both so different; I love both very much – if only I could be in two places at once!”

If you want to know if Marianne is hired – or fired keep tuning in to The Apprentice on BBC One at 9pm on Wednesdays.