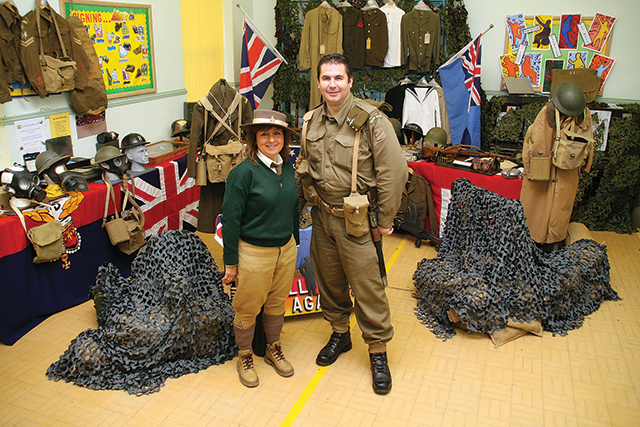 It’s the realisation of a long-held dream for one county couple, and thanks to their dedication and hard work Lincolnshire is now home to a World War II living history museum of national importance.
Paul and Linda Britchford have poured their heart and soul, not to mention their life savings, into the We’ll Meet Again WW2 Home Front Museum project and are delighted to share their hard work with the public now the attraction is open to visitors.

The museum, at Freiston Shore, was funded thanks to a £200,000 government grant and built on a large parcel of land at Plummers Farm, Shore Road. It is now home to the couple’s own extensive collection of 1940s memorabilia – including weaponry, uniforms, medals, photos, toys and food packaging – which the Britchfords use to teach children about the era and also as memory recognition tools for the elderly.

The couple previously ran a mobile museum, which they took to schools all over the country, giving pupils a unique hands-on learning experience covering the Blitz, rationing, evacuation, the Home Guard and Land Army.

“It’s only due to the phenomenal success of the mobile museum that we’ve been able to build this static museum – and that’s thanks to an unprecedented grant from the treasury,” explains Paul.

“This museum houses our whole collection and will now be the venue for hands-on teaching and charity events.

“We’ve been working on the museum for 15 months solid now – I left my job so that I could oversee things, as I didn’t want to employ a full-time project manager. It’s the hardest thing we’ve ever done but seeing people’s reactions is making it all worthwhile.”

The museum, which has all been finished to the highest specifications, features two large separate teaching and display buildings – one focussing on the Home Front and the second on the war itself where the couple of created a unique Blitz experience. The couple’s Anderson war shelter is also on display.

Other facilities include parking, a toilet block and the Ration Book Café.

The museum backs on to the RSPB’s Freiston Shore nature reserve and Paul says a bridge is being installed between the two so that visitors can enjoy both attractions and wander between them.

“The RSPB has put in safety features on all the World War Two structures to make it safe for visitors; we’ve been working alongside them to make it a great place to visit – so people can do the reserve and the museum and make a real day of it,” he adds.

“The support we’ve had has been great – we’ve had a couple of youngsters down here volunteering when they can and prisoners from North Sea Camp have been making the display cabinets, which are fantastic, and filling sandbags for us.

“We have so much more scope – and space – to do things being down here now. The museum is open to the public on Friday, Saturday and Sunday and then, the rest of the week we’ll be taking school bookings so the children can come and do some hands-on learning and interactive role play.

“We can also host charity events. Age UK have been in touch as we’ve done dementia workshops in the past which have worked really well, and maybe further down the line we’d like to install a cinema screen so that we can put on some old films for people to come and watch in the evenings.

“We’ve also done some community integration sessions – exploring how the Polish helped us during the war, what they did for Britain, so we’re hoping to do some more of that kind of integration work too.”

Paul’s passion for collecting WW2 memorabilia was sparked when he was just 8 by his grandfather’s APR badges. His collection grew from there and then began to snowball, while Linda has always been interested in the 1940s too.

The couple started attending 1940s events, displaying and selling their collection and noticed that the cadets and youngsters were always drawn to their stand.

“They would spend the whole day with us and were fascinated by all the items,” recalls Paul.

“And it was from there that we came up with the idea of going into schools. I suppose the idea comes from years ago when I used to work with blind children – I knew how successful tactile learning is.

“We incorporated that into what we do – the children can hold, touch and wear our items – and it works for both able-bodied and disabled youngsters, putting them all on a level footing.

“A teacher friend, Ruth Baldwin, got us a booking for our first school, it was a secondary school and it was absolutely amazing. We couldn’t believe the reaction we got – and it’s all just grown from there.”

Paul and Linda started taking their mobile museum out in 2010 and since then have visited numerous schools across the country as well as holding living history days at Freiston and Perlethorpe Environmental Education Centre, in Nottinghamshire.

An official opening ceremony for their new venture is being planned for later in the year and the couple are now looking forward to many more visitors – young and old – joining them for a step back in time.

Adult entry to the We’ll Meet Again Museum, Shore Road, Freiston PE22 0LY is £5 and £3 for concessions and under 16s. Family admission – 2 adults and 2 children – is £15. It is open to the public Friday, Saturday and Sunday, closed Monday and Tuesday and is available by appointment only on Wednesday and Thursday.