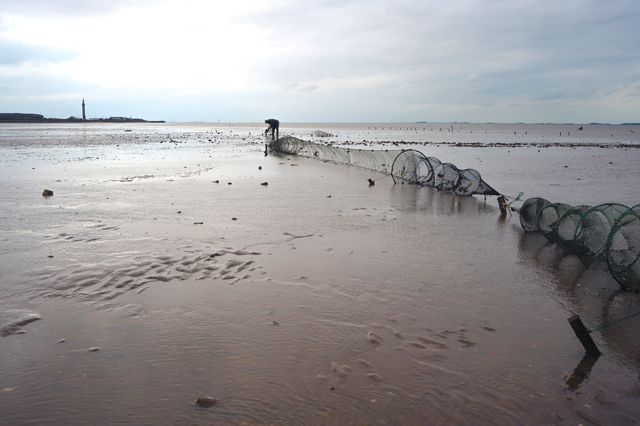 According to our historic archives, fishing in the Humber estuary goes back 1,000 years to when a Dane named Grim landed where Grimsby now is. However, delve a little deeper and you will soon find records of wooden Bronze Age boats being dug out of the Humber mud, evidence that takes us back a further 3,000 years.
Even further back is the Neolithic period, about 4,000 BC, and in all that time the Humber provided man with fish. In fact, man has lived and survived here since the last Ice Age 10,000 years ago; even then, of course, fish still swam up and down a Humber estuary that must have been a very wild and windswept place then.

Throughout that period and for as long as man has lived along the Humber shoreline, fishing has sustained life. No nets in those far off days; they made wicker fish traps out of willow, fished with bone fish hooks and spears. It is almost certain that a fish trap, or more likely several fish traps, would provide more fish per day than any other method.

Those fish traps were conical in design with a smaller, shorter cone or funnel fixed at the mouth of the trap. The fish swim in through the narrowing cone but once inside cannot find their way out. It is a very simple design and works extremely well.

That very same design has survived throughout the centuries and would certainly have been the main source of fresh fish in those far off days. That very same design still used in some parts of the world today is known as a ‘fyke’ net or trap and ‘Bubs’ Cromer of Cleethorpes, a retired trawler skipper, is almost certainly the very last man to use this form of fishing on the Humber bank. In the unlikely event that we are all forced to go back to nature, Bubs will be the last of the last to use this method under the Humber skies.

Fishing seems to be in the blood for some people and Bubs cannot resist the lure of outwitting the fish, be it one for dinner or thousands of them on deck – it is one and the same thing for him. He makes and mends his nets in his back garden. He lives only a stone’s throw from the beach and so is able to go each day, just after the tide ebbs, to see what he has caught.

His target fish during the summer is Dover sole. Some days there are none, that’s why they call it ‘fishing’ and not ‘catching’. Most days he catches a nice meal for himself and his wife Kirsten, with an average of two or three good-size fish. Some days there are more of course, and the inevitable surplus goes to friends and family.

It is not unusual in the summer months to catch a nice bass or even a turbot. He once found a 2lb mystery fish in his net which turned out to be an Allis shad. There are the inevitable flounders, some of them are quite a size; they are often stuffed full of immature cockles, sometimes mixed with a few crabs. Eels have been missing for the last couple of years, as they have been through some kind of environmental crisis, but this year they have returned so something good is happening ‘out there’. Eels and all the small fish are put into a fairly deep pool near his net to live and breed.

Unlike days of yore, a section of today’s ‘yoof’, so skilful at destroying and so backward in creating, visit his nets which are easily seen from the high tide line and take a knife to them. Their crass actions are only surpassed by their decision to slash the nets across the top (easiest to reach without having to bend down). Had they any brain at all they would have slashed the net at ground level thereby allowing the fish to escape.

Bubs, now seventy-six, finds it difficult to mend the net due to his age and the process of ‘bending’ for any length of time but he says: “If they slashed it at the bottom I think I would have to stop fishing altogether, I cannot manage to reach to ground level to do the mending and they are far too heavy to collapse and bring home every five minutes.”

So, the wooden dugout boats have been and gone, the herring fleet has been and gone, as have the huge fleets of North Sea and distant water trawlers sailing out of Grimsby, once the largest fishing port in the world. But not far from that once-thriving fishing industry, under the Humber skies (and in the Humber mud) this ancient method of fishing is also soon to become a fading echo in the pages of history.