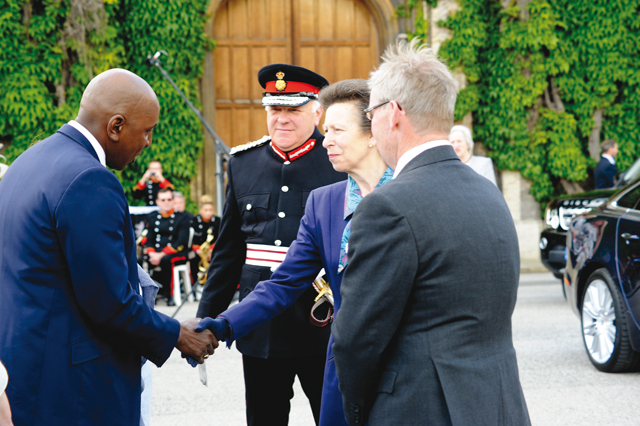 Children are being helped to discover something in their past to inspire them to follow their dreams, thanks to a Lincoln-based charity launched by actor Colin McFarlane.
Following on from its hugely successful pilot back in 2011, the Making History project is now working with 400 students in sixteen schools across Lincoln and London to help youngsters uncover something truly inspirational in their family history around the Great War.

Designed to raise aspirations, broaden horizons and provide opportunities, the project will give the students support from a number of professional mentors as they become history detectives, delving into the stories behind their own family trees.

They will use software and access research tools from family history specialists MyHeritage and Findmypast with the support of professionals including Dr Nick Barratt – the face of the BBC’s Who Do You Think You Are? when it first began – and Neil Fraser, from Fraser & Fraser, of BBC TV’s Heir Hunters fame.

The youngsters will then make history themselves, by turning these personal stories into short films to be screened at the end of the six-month project in November, in Lincoln and at London’s British Film Institute.

Colin, best known for his roles in two Batman films and as the voice of The Cube, was initially inspired to set up Making History by a story in a script called The Land of Look Behind that he was reading at the time.

In it, a young black teenager is inspired to research black history as a result of stumbling upon the story of the little-known explorer Matthew Henson, the first man to reach the North Pole in 1909.

Colin then set about finding like-minded souls who shared his vision for providing the same opportunity to students up and down the country, to research their cultural and family history and be equally inspired to delve into their past to find a story that inspires them to follow their dreams – Making History was born.

“Generally the average age of someone researching their family history is 55, this project rips up that statistic by involving the whole family and empowers and inspires children to follow their dreams,” explained Colin, who is well-known to youngsters having worked on a variety of children’s shows including Mike The Knight, Chuggington and Little Princess.

“Some truly amazing stories emerged from the original pilot, from just thirty-five students, with one pupil researching a probable family connection to Hitler’s brother; another found they were related to a saint, another to a US silent movie star, another to the inventor of Morse code and another to royalty!

“The project has been fantastic for the children and it has been both moving and inspiring to witness the power of it. Understanding where you come from is vital for a sense of belonging and sharing these discoveries helps break down barriers between class, cultures and generations, connecting us all,” he added.

Making History has been a labour of love for Colin, and he hopes it can eventually be rolled out nationally, or even internationally in the future.

As an inclusive project it looks to take on a wide spectrum of schools – state and private, faith and international – and will result in each pupil creating a five-minute film about their findings.

Their mini-movies will focus on their links with ancestors who lived during the 1914–18 conflict – from those who fought to others who remained at home, and from those who survived to those who lost their lives. The discoveries made will be particularly poignant during this centenary of the First World War.

MyHeritage is the principal family history sponsor for the project and will provide exclusive access to its family tree building software database of more than six billion historical records. Other key partners are Elsium, a team of Apple education trainers who will guide the students to make the most of their iPads and help with the movie-making process; the First World War Centenary Battlefields Tours Programme and Equity Coaches, which will take some students and their families on trips to the battlefields.

Other supporters include the Lincoln Hotel, Optima Designs, Lincoln Heritage and Lincoln Archives, while Findmypast will provide exclusive access to its comprehensive world history database.
Joyce Martin, JCS Online Resources, said of the project: “From the moment Making History approached JCS for access to Findmypast I was captivated by their project.

“It was clear to me that this was a unique, ground-breaking project for schools and the heritage sector, with the ability to move, inspire and empower children and their families.

“By turning these stories into films they will leave behind an enduring legacy to enrich and enthral us all.”

Peter Roe, head of history and Louise Laming, headteacher at Lincoln Castle Academy, added: “Making History is one of, if not the most, inspirational projects I’ve seen in over fifteen years of teaching.

“We saw students’ confidence grow and family relationships enhanced. Several students reconsidered their pathways and decided to apply for university. All engaged with their heritage and it enhanced their respect for their ancestors and their unique stories.

“This project has revolutionised learning.”

It’s a busy time for Colin, who as well as overseeing Making History, is due back on our television screens this autumn when he appears in episode three of the new Dr Who series. On top of that he’s about to head out to Romania to start filming another project – A Christmas Maid for a Princess – in which he will play the character Chancellor Riggs.

He added: “With Making History I wanted to create something that could become a national project but Lincoln had to be the headquarters. I was born in London, but have lived here since I was eighteen.

“We are already finding some great stories with the students and we really want this to be able to grow; we’re actively seeking funds to help us achieve this and really can’t wait to see the end results.”

For more information about the charity and its work visit the website www.makinghistory.org