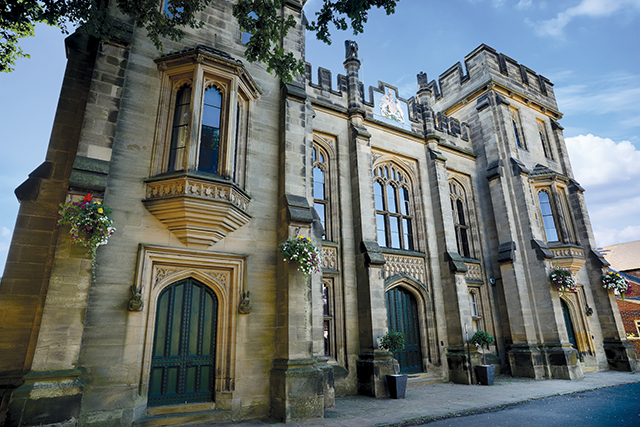 Spalding’s gothic courthouse is a familiar sight to many, presiding majestically over the Sheep Market. Kate Chapman visited the landmark building, which has recently been turned into a stunning family home and events venue.

The Grade II listed property’s transformation has been a labour of love for Oliver and Dorota Sneath, who moved into The Sessions House in 2017, after it was delisted having served as the district’s magistrates’ court for more than 150 years.

It was only after planning their own wedding – which was celebrated with a reception in their new home – that the couple came around to the idea of opening it up for others to enjoy too.

Flash forward a couple of years and it is now fully licensed for marriages and civil ceremonies – with the choice of the grand court room, which can accommodate up to 160 people, or the quirky appeal of the Buffalo Room, for more unique, intimate affairs.

There are also options to hire a selection of rooms for fine dining, corporate events, parties and meetings while the couple also debuted a Halloween House of Horrors spectacular in October and are ready to launch immersive Murder Mystery evenings once Covid restrictions are lifted.

“It’s working really well, the building really lends itself to hosting events because of the layout,” explains Dorota.

“There are separate entrances and exits that were used for the magistrates, witnesses and defendants when it was a court and we use these so that we can keep our home separate – it works really well.

“We had amazing feedback after holding our own reception here – lots of people said we should consider turning it into a venue, and after some thought we decided to go for it.

“There are very few places around here – we found that out when looking for somewhere for our own reception, although it was quite short notice, everywhere was fully booked.

“We wanted to offer people something a little different. The courthouse is ideal for those looking for something a little grander, but who perhaps do not want a church wedding, or those marrying for a second time, while the Buffalo Room is more suited to smaller celebrations.

“We’re very involved in each event too. I am here to help with the styling and Oliver manages things. We do have a limit for evening receptions and parties of ten per year though because it’s our family home.”

Built in 1843, The Sessions House was designed by Charles Kirk. Constructed in a time of prosperity for Spalding, the gothic castle style of The Sessions House had no expense spared in its architecture and fixtures and cost £6,000 to construct – roughly £770,000 in today’s money.

Many of the original features remain and the building is steeped in history – even the blackout blinds used during World War Two can be found tucked away in the north tower.

As yet the couple have been unable to unearth the original plans despite appealing to the Ministry of Justice, RIBA, HM Courts and Tribunal Service, a number of district and county councillors and even travelling down to London – as they were hoping these would reveal the full secrets of the building and its original layout.

It was while they were searching for their first home together that the courthouse was put up for sale and the couple’s love affair with the historic building began.

“The idea of actually buying it kind of grew organically – I lived in a new build at the time, but I’m really passionate about old buildings, and so is Oliver,” recalls Dorota, who met her husband while they were both working in the produce industry.

“We used to go to auctions and antique fairs together even though we didn’t have anywhere to put anything at the time!

“But we knew we wanted a place with character, so when this went up for sale, we thought we’d try our luck – rather naively! If we knew what we know now I’m not so sure we would have rushed into it quite so quickly! We do love it though and wouldn’t have it any other way.”

The couple moved into the building’s cells initially with the vision of living in the upstairs rooms once they had been renovated. But over the next few months they realised their plan wouldn’t quite work.

“In the beginning we just wanted to live here and see how the layout was going to work.

“When we got the keys, we were met by someone from G4S security who handed us a giant box full of them,” says Dorota.

“They told us they’d tried to sort them out and some were left in doors but there are still others that we’re trying to match up!

“We moved into the cells with the intention of living upstairs, but the windows are only single-glazed, and it was freezing and noisy, so we ended up staying in the cells. The walls down there are so thick and it’s below ground, so it’s much warmer. There were lots of things about living in an old building that we just never thought about.”

After a few months the couple began the painstaking work of renovating the courthouse’s 40-plus rooms, retaining its original features where possible. They have removed a series of stud walls which were fairly recent additions to open up some of the smaller rooms as well as decorating, making repairs and installing a new kitchen.

The couple have undertaken the majority of the work themselves, all while continuing to work full-time and raising their two young children. They have learned new techniques such as gold-leaf painting and spent many hours sanding down floors to achieve the desired finish before furnishing the completed rooms with breath-taking results.

“There’s still a lot of work to do, it’s ongoing in a place this size. Living here though, we don’t always realise how far we have come and appreciate how much we’ve done – although there is still always more to do,” adds Dorota.

“It’s been so sad this year, with so many events being cancelled. We’ve had one couple postpone and scale down their wedding three times.

“The hospitality industry has been hit very hard, with many venues struggling to keep afloat and some even being forced to close. We are fortunate that for us, this is our home too.

“It’s such a beautiful space and we just want to be able to share it with others. We can’t wait to welcome more people back through our doors.”