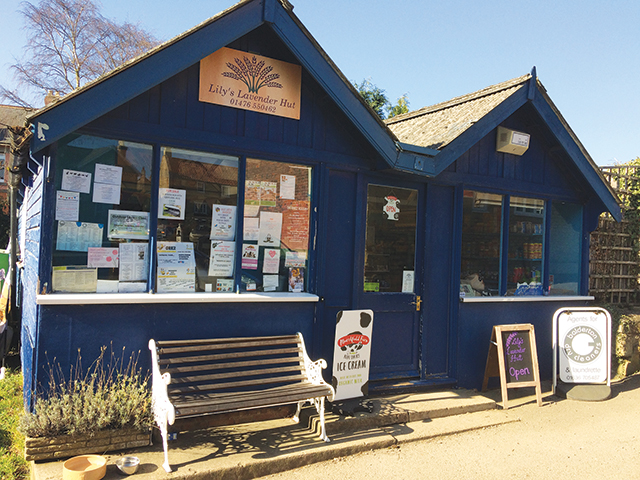 What is probably the county’s only wooden village shop is due to be replaced with an identical new version of itself this month.
Corby Glen’s Market Place is probably best known for its mellow Ancaster stone architecture but next door to the local pub is the village shop, now known as Lily’s Lavender Hut, which has been housed in a wooden chalet since the mid 1950s. It replaced a store which had operated from the house across the road but was damaged by a vehicle, so owner Eric Footitt commissioned the hut on the former site of Adcock’s Butchers. As the business grew he added a second hut, which gave the building its distinctive double gabled frontage.

Current owner, Julie Tuckey, purchased the business two years ago from Pauline Bland, who ran the shop for thirty-two years. There is a nice continuity in that Pauline still works part-time for Julie.

“In my previous career I ran a nursery,” said Julie who is from Boothby Pagnell, “so I am used to being my own boss. This shop is right in the heart of the village and my plans have always been to keep the existing services for customers while offering new ones too.”

Julie knew some refurbishment to the building was needed but a leak revealed major structural problems.

“At that point I decided to find a way of replacing this structure with one which would be fit for purpose.”

Julie has secured a LEADER grant, with the help of South Kesteven District Council, to fund the demolition of the old structure and construction of a new building, which will be more or less identical but adding a side extension, allowing disabled access and toilet facilities. There will also be a new kitchen, a four-table café area and a secret side garden.

Julie explained: “It will take six weeks to complete the work during which time the shop will continue to operate from a cabin in the pub car park. The landlord, Simon Harwood is a carpenter by trade and will be building the new premises after a local builder has laid new foundations and a concrete floor.”

Villagers will still be able to rely on their papers and magazines being delivered, and a good range of local produce, which includes Saints and Sinners jams and chutneys, meat from Ancaster Butchers, Bloomsbury bread, as well as fresh eggs from Leasingham.

The new premises will also give Julie the opportunity to put in place her ideas for making Lily’s Lavender Hut an even greater asset to the community. The business is named after her grand-daughter and Julie will be using her nursery teacher and home economics skills to hold imaginative play sessions, baking classes with themed treats such as pancakes and ice creams for youngsters while parents enjoy coffee and snacks. The Hut will also be an ideal meeting place for village social groups.

The opening of the new shop will be on Good Friday 19th April at 10am when Julie will be offering a glass of Prosecco and nibbles to customers.

“I think the greatest compliment will be customers saying the building looks the same but this fit-for-purpose store will be ready to serve Corby Glen for another fifty years.”