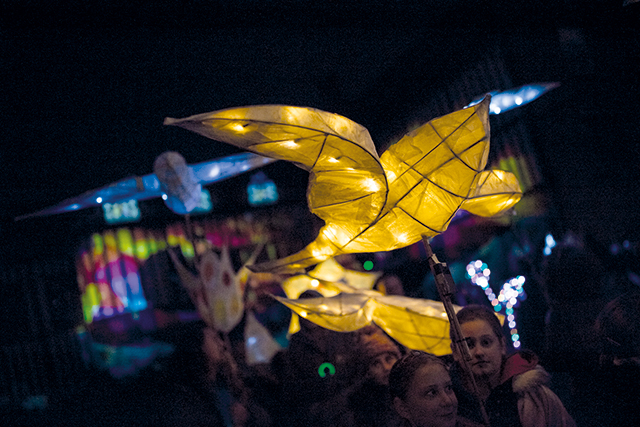 Illuminate the Pilgrim past

Stephen Wade meets Anna Scott to learn about the Illuminate celebrations taking place this month in Gainsborough.
After lengthy preparations, much thinking and discussion, several meetings and consultations, a number of striking and impressive events commemorating and celebrating the momentous story of the Mayflower Pilgrims in Lincolnshire are set to take place.

In Gainsborough this month, it will all be about shining a light, and thinking about what that might mean in the context of those religious ‘Separatists’ as they were called, to show their deviance from the mainstream Christians of their time.

I spoke to Anna Scott, Mayflower 400 officer at West Lindsey District Council, about the centrepiece Illuminate event taking place on 16th November. The global story, embracing everything in the county and beyond, arises from the stark fact that in 1620 the Mayflower sailed from British Plymouth to what would be Plymouth, Massachusetts. The rest is history – as big as it gets.

Anna pointed out that within a radius of around 30 miles of Gainsborough we find the major origins of non-conformity in our land. A glimpse of this is there today; as the visitor walks from Marshall’s Yard to the centre, he or she passes a meeting house of the Society of Friends. But the heart of the Pilgrims’ story is in the determination of the people who eventually boarded that ship, after trials and sufferings in their own land, as they fought to find a life in which they could worship their God in their way.

Gainsborough is out to make Illuminate a triumph: workshops have been organised for people to produce such items as lanterns and costumes, with a cluster of core themes in mind: migration, tolerance and freedom. Children will participate, and local authorities and experts such as members of the Blue Badge Guides, and Richard Brackenbury, will be involved.

In Gainsborough, a pivotal location is the United Reformed Church, situated close to the Old Hall and to Trinity Church. On Illuminate day, a procession will start at the United Reformed Church, parade past the Old Hall, and there digital images will be projected onto the wall of the Hall, in the style of stained-glass. There will, of course, be pictures of ships, giving the ‘feel’ of the era of the Mayflower. The itinerary then takes us to the market square and finally on to Marshall’s Yard. This will all happen on the evening following the switching-on of the Christmas lights.

One of the most significant and heartfelt aspects of the presentations is to have a ‘silent switch-on’ event in Marshall’s Yard after the Illuminate event itself. With such touching inclusions, there is a sense that Illuminate is about far more than the Pilgrims themselves. Of course, as Anna Scott tells me, one aim of the enterprise is to open up ways of seeing the Mayflower story in a different light. Anna points out that the Pilgrims around one of the significant leaders, William Bradford, were very young. Bradford was only around 18 years old.

Anna said: “They were young families. There were pregnant women on board. Most were young and they were radical. They were doing something different.”

There was also tragedy awaiting many of the ‘saints’ as they termed themselves, to distinguish the Pilgrims from other travellers who were crossing the ocean for economic, practical reasons. It became clear during my talk with Anna that we need to move away from the stereotypical image of The Pilgrim Fathers, as they have always been called, an image of old men with long grey hair and wearing black suits.

The Pilgrims were undergoing a tough and demanding ordeal on that journey. But they were reviled and abused long before that famous voyage. As one Edwardian historian, Robert Mellors, put it (quoting mostly Bradford’s words), ‘They were hunted and persecuted on every side… some were taken and clapped in prison, others had their houses beset and watched by night and day… and the most were fain to fly and leave their houses and habitations and the means of their livelihood.’

Their stresses and sufferings did not end when they boarded ship, nor when they arrived in America. William Bradford’s wife, Dorothy, was drowned at Cape Cod after she fell overboard the Mayflower; Isaac Allerton’s wife died shortly after the voyage, and John Crackston and his son both died in the first winter ashore in Massachusetts.

It is surely all the more fitting, then, that the Illuminate events across the county should celebrate the positive, and fix on enlightenment and understanding rather than on the extreme deprivation the Pilgrims suffered. It is, after all, to mark and validate ideals of peace and understanding.

The origins of the event lie in an Arts Council grant of £100,000 which was awarded to West Lindsey District Council. The entire project is long-term, though. There will be a year-and-a-half of further activities, with a theme of ‘Challenging the Myth,’ reminding us that heritage and historical studies today see part of their role as shining lights into the dark corners of the past, where so many life-stories and testimonies remain untold – or unheard.

A number of local partners have all been very much a part of the planned events, and in the end, we might isolate one extremely important aim of the programme, once again, expressed by Anna Scott: “This money will help us provide high quality, engaging events for people in Gainsborough, to truly bring alive the story of the Mayflower Pilgrims and help locals and visitors alike understand what the story means for them.”

Why ‘Illuminate?’ The answer is in one of William Bradford’s most powerful statements: ‘Thus out of small beginnings greater things have been produced by His hand that made all things of nothing… and as one small candle may light a thousand, so the light here kindled hath shone onto many, yea in some sort to our whole nation.’