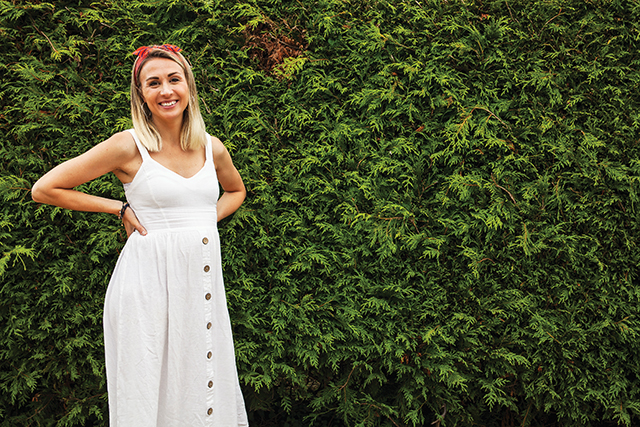 Illustrator puts herself on the map

When Katie Cardew began selling her quirky illustrations to friends and family she never dreamt the venture would take off – but six years on Kate Chapman hears how her business is drawing support from all over the country and beyond.
Katie’s distinctive and stunning fine line drawings have been commissioned by numerous companies, events and individuals while her work also adorns her own fabulous range of cards, giftware and homeware.

Her most recent project, only unveiled in July, is a beautiful new map of her home town Stamford, showcasing its varied independent shops, businesses and cafes, alongside its other iconic buildings and historic landmarks.

“Last year I illustrated a map for Rutland after people made suggestions for what should be included, so this year I decided to create one for Stamford,” says Katie.

“I actually did one back in 2015, but it’s now a little outdated as some of the businesses no longer exist, so I thought I’d refresh it and I really wanted to support the Shop Stamford Movement.

“We did a big call out, and asked people for their suggestions as to what should be featured and as long as it fitted, we’ve put it on there – all the independent shops, cafes and business, the Market Place and of course Burghley House.

“We had a fabulous unveiling at our open studio event where people could buy prints, tea towels and cards with the map on – there’s been a great reaction to it.

“I absolutely love where I live, it’s so aesthetically beautiful and I find the people here are very loyal to it while visitors like to take something away as a little reminder, which is lovely.”

Katie, who grew up in Stamford and attended Bourne Grammar School before completing her A-levels at The King’s School, in Peterborough, has always been passionate about art and drawing.

“I’ve always absolutely loved it and used to spend hours and hours drawing when I was younger,” she said. “I excelled at it, both through primary and secondary school, where I took GCSE and A-level art.

“That was when I started working on fine line illustration and Photoshop and really began to develop the style that I use today – it’s quite quirky, unique and fun.

“But art had a bit of a reputation; it wasn’t a career that was going to be very profitable, so I was encouraged not to give up on academia and I ended up going to Newcastle University to study English, although I still kept drawing whenever I could as a hobby and on holidays.”

After graduating, Katie moved to London and worked for a finance company for a while, until a request from her sister, a graphic designer, made her start to reconsider her future.

“I really enjoyed working in finance, but I suppose I was a little dissatisfied with corporate life. When my sister asked if I could do some illustrations for a magazine she was working on I said yes, and it was after this that I realised, maybe I could earn some money from drawing after all,” Katie recalls.

“I decided to move back home to Stamford in autumn 2013 and started doing a few commissions for friends and family of houses, working from the dining table.

“I took a job in a local pub, just pulling pints, and they put some of my work up too and before I knew it I found myself inundated – bespoke orders were coming in thick and fast! It was just amazing as I really had no idea how it would go, in fact I’d half expected to be back in London within the year and I never expected to get commissions from people through word of mouth.”

Katie attended a few local events around Stamford, Rutland and Peterborough with her work and then sent out a few emails, offering her services to corporate companies, which resulted in a commission from Waitrose for a double page spread in one of its magazines.

Shortly after she launched her own fine art print range, mainly illustrating buildings in her home town, as well as country pursuits and British wildlife.

Her range has grown quickly and now includes more than 200 different products – such as cards, mugs, tea towels, kitchen boards, prints and more – which she has designed and illustrated herself. Her beautiful, bold work is sold online and at events including the Burghley Horse Trials and is stocked nationwide and overseas, with outlets in the Falkland Isles, South Georgia and Canada selling her pieces too.

In 2018 she moved into her own custom-built studio in King’s Cliffe, just between Stamford and Peterborough, where she regularly hosts open events so visitors can browse and buy her products including her popular Game Birds, I’d Rather be at Burghley, Gin & Tonic and Flamingo ranges.

As well as bespoke commissions, continually developing her homeware and print ranges, Katie also takes on commercial commissions and holds workshops showing others how to draw too.

During the past few years she has been commissioned by Harrogate International Festival to produce the official illustration for its marketing campaign – a copy of which was presented to Prince Charles at a special open evening – while more recently she’s been working on a project for Henley Regatta.

Her workforce has also increased too, with a core team of four, which is supplemented by freelancers during busier periods.

“Starting my own business has been a really steep learning curve, but I’ve really surprised myself with how much I’ve enjoyed the other aspects, aside from drawing, such as the designing and the packaging,” Katie said.

“It’s only been the last eighteen months or so where the homeware range has really grown and now we’ve got over 200 products, but I’m really happy with them – they’re good quality and designed to mean something to someone and that’s our unique selling point.

“Wherever possible they’re packaged plastic-free and we’re incredibly proud to be a British company, with every one of our products made in the UK, using local manufacturers wherever possible. They’re beautifully and carefully crafted and made to last.”

As for the future, Katie is keen to keep developing her existing ranges while taking her award-winning business in other exciting new directions.

She has more big commissions in the pipeline, not to mention the pending arrival of her second baby later this year, and is also working with several schools to create beautiful drawings of their buildings and pupils, which are available to families to buy.

To find out more about Katie Cardew and her work visit www.kcillustrations.co.uk