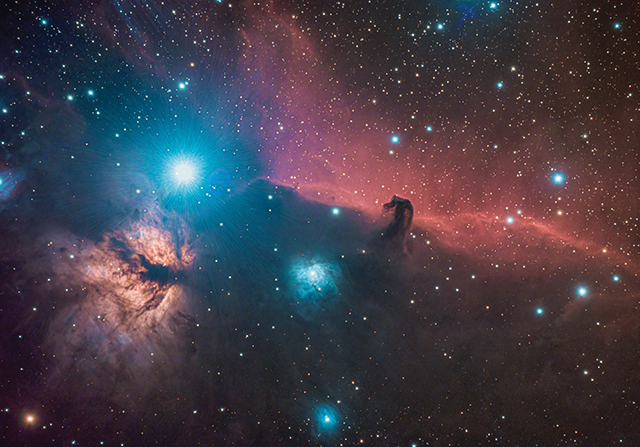 Astrophotography has become a mesmerising hobby for the Reverend Charles Thody. He tells Lincolnshire Life how his interest was prompted by the night skies over the county.

Born in Hertfordshire, I am a child of the ’60s. I have great memories of that decade, not of the so-called ‘Swinging Sixties’ but of the Space Race, Star Trek, Battle of Britain and regular visits to the Lincolnshire Fens, where my grandfather had been billeted during World War Two. He was an armourer at East Kirkby – his landlady was like a second grandmother to us.

I was mesmerised by the Apollo programme. In 1966 the series Star Trek premiered, and I remember watching this with my mother – dreaming of “boldly going where no man had gone before” (while also watching the Apollo astronauts do just that). In 1968 the opening scenes of the famous Battle of Britain film were shot at Duxford, near to where we lived, and I have everlasting memories of watching the filming with my father as we sat in a field at the end of the runway – I was hooked. From that day on all I wanted to do was fly, work on aeroplanes and maybe even get the opportunity to ride into space!

During a visit to my grandfather’s landlady in Stickney in the early ’70s, she spoke of her fascination with flight and the men on the moon, and how she remembered the reports of the Wright Brothers in 1903! She was part of that history, all this in one lifetime – my passion only deepened.

By the mid ’70s I was working on historic aircraft at Duxford, and by the mid ’80s was a qualified aircraft engineer, and had learned to fly. Some of my dreams had come true. But what about space flight? If only…

Jump forward to 1991 and I moved to Lincoln to take on a whole new life – to study theology and (in 1994) to be ordained in our stunning Cathedral. One evening I was driving through the Fens and stopped near East Kirkby, the station where my grandfather had spent most of the war. Stepping out of the car to take in the atmosphere of the moment I looked up and was immediately and completely overwhelmed by the sky – it was awash with stars, with a clarity that I had not experienced before.

Satellites could be seen racing across that sky, and it was even possible to pick out the shape of a distant galaxy – I realised that, while I might not be able to physically fly into space, this was the beginning of my journey to explore it from the earth.

Since that moment I have always had a keen interest in the night sky – the constellations, the stars, the nebulae (deep sky objects) within our own galaxy and the galaxies beyond. Owning a telescope was way out of my reach for many years, but I would follow the images captured by the Hubble Space Telescope which, since its launch in 1990, has been introducing us to many wonders of the universe.

In 2010 my wife gave me a telescope for my birthday, and promptly lost me to nights in the back garden whenever the clouds cleared! I started to experiment with attaching a camera to the scope and seeing if I could record any of the wonders I could see. The next stage of my journey of exploration had begun…

I began to experiment more. I found that I could explore the wonders of the night sky with my camera and telescope, capturing those moments to share with others.

I could also, at last, time travel! I started with the Orion Nebula as it is such a stunning object, clear in the southern winter sky and (in space terms) not that far away – just 1,500 light years. The image my camera was capturing was 1,500 years old – it had taken that long for the light to travel across space to my telescope. I was looking back in time.

I moved on to other objects – such as the Flame Nebula and Horsehead Nebula, star clusters (some containing around one million stars like Messier 13, some 25,100 light years away) or the Pleiades (often called ‘The Seven Sisters’) that can be seen with the naked eye in a dark sky, but is stunning when caught on camera. Such images could be taken in one night.

In some of my photos I could, however, also see the dim light of distant galaxies – to render more detail required a lot more exposure time, certainly more than one night. My equipment was, at this time, portable so I began plans to build an observatory.

Indeed, when we looked to move house from the increasingly light polluted village in which we lived, one of the criteria for the agent was “a dark sky with clear 360-degree views and space to build an observatory” – the agent believed this was a first in their many years’ experience!

In 2018 I was able to build that observatory, a 2.5-metre dome that is robotically controlled and houses an 80mm telescope and specialist astroimaging camera. My first image was taken from this in the late autumn of 2018, controlled from my iPhone, while I was in the Arctic Circle photographing the Northern Lights from the back of a ship. The internet is a wonderful thing sometimes!

Supernova remnants (remnants of stars that have come to the end of their lives and have ‘exploded’) then caught my imagination. My favourite is the Veil Nebula – the remnants of a star that was at least 20 times the size of our sun and exploded between 10,000 and 20,000 years ago. This is a huge (but dim) nebula that took three nights to photograph and then stitch all the data together.

Building the observatory has also allowed me to expand my imaging to dim and distant objects, such as far-off galaxies. A favourite is the Andromeda Galaxy. Only 2,500,000 lights years away, this galaxy is our nearest intergalactic neighbour. Another is spiral galaxy M51, 28 million light years away, and interacting with its galactic neighbour. To capture detail within these galaxies requires hours of exposures, sometimes taken in different months or even years, depending upon the sky conditions. Some very clever (and very cheap!) software assists in putting all the data together.

I am currently travelling further and further back in time, gathering data from more distant galaxies – some I have been studying since the winter of 2018! The furthest I have ‘seen’ so far is some 1,200 million years ago – I have a lot more work to do to bring out any detail in those galaxies.

So, my journey continues – feet firmly planted on the Lincolnshire earth yet my eyes (and imagination) increasingly further away as I travel further back in time from my garden.

And the joy of capturing these images is being able to share them and introduce others to the wonders of our universe from the dark skies of Lincolnshire. While any reality of my travelling into space may be dwindling, my dreams live on as the awe and wonder of what I see continues to overwhelm me as it did that night at East Kirkby.