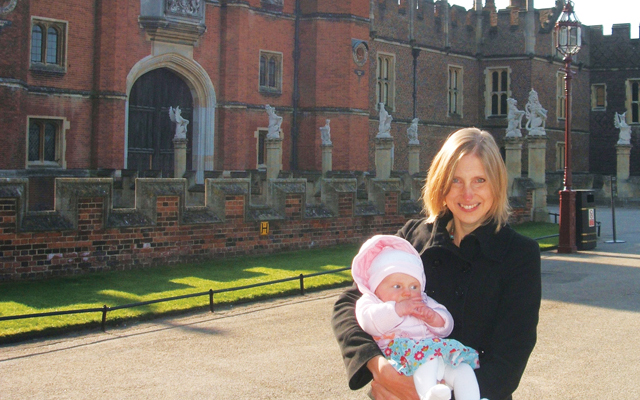 In time with the Tudors…

A lifelong passion for history has led to a host of fascinating roles for Dr Tracy Borman – but none more so than her latest, which sees her helping to bring the past of some of the nation’s most iconic landmarks to life.
As the new joint chief curator for Historic Royal Palaces – the charity which looks after five iconic palaces, including Hampton Court and the Tower of London – Tracy is thrilled to be researching their stories and promoting them to a wider audience.

The position also complements her other roles as a writer and chief executive of the Heritage Education Trust, a charity encouraging children to visit and learn from historic properties.

Born and bred in Lincolnshire, Tracy grew up in Scothern, attending the William Farr and Yarborough schools, where her passion for history was first ignited.

“I’ve always loved history and I have several people to thank for that, primarily my history teacher at Yarborough, Judi Jones – she really got me into it,” said Tracy.

“She was really amazing and taught me that history was all about stories and people, not just boring dates, facts and figures.

“My favourites were the Tudors. I remember there were pictures of them all around the walls – Henry VIII, Elizabeth I and the rest – and that just brought it all to life for me.”

After school Tracy pursued her subject at the University of Hull, where she completed three degrees – focusing primarily on the reign of Elizabeth I – culminating in her PHD in 1997.

“During that time the advice I’d received had been that if you’re studying history, you’re heading for a career as a teacher, but that’s so wrong,” she said.

“There are so many careers open to historians. I just happened to be browsing some brochures and saw an article on heritage management – it awakened my interest and that’s what I’ve been doing ever since.”

On leaving university Tracy forged a hugely successful career, working for a range of historic properties and organisations including the Heritage Lottery Fund, the National Archives and English Heritage.

In her latest role at Historic Royal Palaces she is responsible for bringing the history of Hampton Court Palace, The Tower of London, Kensington Palace, Kew Palace and the Banqueting House in Whitehall to life for visitors and the general public.

“As an historian for the palaces I carry out research into their histories, and work on the information for exhibitions and events,” she explained.

“We’re not supposed to have a favourite, but being a Tudor historian mine is Hampton Court Palace – in my opinion it’s the best Tudor palace in the world.

“When I’m working late, and there’s no-one else around, there’s just an amazing atmosphere – there’s a reason there are so many ghost stories about it!”

In addition Tracy also gives talks about the historic palaces and is often called upon to speak to the media when a story involving the monarchy breaks – including earlier this year when she appeared on ITV’s Daybreak talking about the history of royal births to coincide with the christening of HRH Prince George of Cambridge.

“I also give talks about the palaces – curators tend to be the spokespeople for any stories involving them,” she added. “There has definitely been an increase in visitors in recent times, especially since the Duke and Duchess of Cambridge have moved into Kensington Palace.

“People do genuinely expect to see them. Obviously there’s a private side to the palace, and that’s where they live. But it’s great when a royal story breaks and generates interest.”

Tracy’s team is also responsible for deciding which artefacts go on display at the venues, as well as researching their stories, while working closely with a separate conservation team which cares for and preserves them.

In addition to her role as curator, Tracy returns to Lincoln once a month in her capacity as chief executive of the Heritage Education trust, at Bishop Grosseteste University.

“The trust encourages young people to visit historic sites,” she explained. “It presents the Sandford Award to sites which offer excellent education programs. Around fifty sites win the award each year.

“We’re getting more and more Lincolnshire awards. It’s a lovely job and it brings me back to Lincoln every month too – I love my home city.”

The remainder of Tracy’s time is spent pursuing her other great passion – writing. She’s completed several historical books, including her latest work, Witches – A Tale of Sorcery, Scandal and Seduction. This is a story about Belvoir Castle, and three women who were accused of bewitching the Earl of Rutland’s sons to death during the seventeenth century.

“Writing is the thing I love most – you get to research and find out about all the different people from the past,” said Tracy.

“Witches is such an interesting, local story. These women were persecuted for absolutely no reason and put to death – they were made to be scapegoats. It’s really fascinating and disturbing.”

Tracy’s next written project is a biography of Henry VIII’s chief minister Thomas Cromwell, to coincide with a television adaptation of Hilary Mantel’s award-winning novel Wolf Hall due to be screened next year.

“I am writing the true version. I usually get two years to turn a book around, but this time I’ve got just ten months. There’s a lot of research involved. In truth Cromwell wrote and received an awful lot of letters – he was up at 4am in the morning writing letters!

“Most of my research has been done in the British Library and National Archives. There’s quite a lot already written about Cromwell, but I always try to go back to the original sources to bring something new to life.”

Following the Cromwell biography, Tracy’s been signed up to pen another book, this time delving into the private lives of the Tudors.

“It will take readers behind the closed doors of the court – what they ate, how they washed and generally lived their lives,” explained Tracy.

“It will really lift the lid on the Tudor court – I’m ideally placed being at Hampton Court as I have access to where they actually were. It’s another exciting project.”

*For more information about Tracy’s work and research visit her website www.tracyborman.co.uk