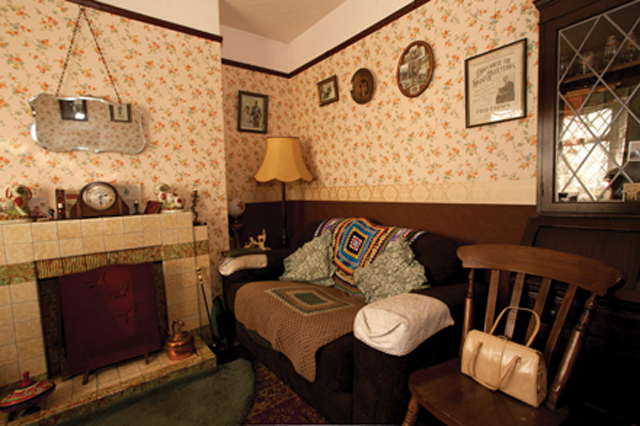 To enter the 1939 House is to take a step into the past – just like Nicholas Lyndhurst stepping through a portal in Goodnight Sweetheart. There are even white-painted ‘blackout’ stripes guiding you to the back door, reminding you that there is a war on.
Situated on Stather Road, Burton-upon-Stather, the house is only a matter of yards from the River Trent.

Inside the 1939 House tea is served up in either a cup and saucer or an enamel mug and it tastes like real tea. You can smell carbolic soap and suds as the washing is done with a posher and a dolly tub in the scullery. The house is filled with the strident ukulele of George Formby and the torch songs of Al Bowlly. Now and again Prime Minister Neville Chamberlain, with a heavy heart, declares war on Germany, and the clipped tones of Lord Haw-Haw break the air. A framed photograph of King George VI and Queen Elizabeth takes pride of place on the wall. Not so much a Groundhog Day as a Groundhog Year.

However, the house isn’t just for show; owner, Jo Francis, actually lives the 1939-cum-wartime life: “I grew up listening to my grandparents’ stories of their youth and whenever there were school trips to museums I was always pulled towards the wartime exhibits; only, I always wanted the rooms to come alive.”

Burton-upon-Stather played its own part in the war effort as secret trials of Duplex Drive floating amphibious vehicles, nicknamed ‘Donald Ducks’, were held there in readiness for the invasion of Europe, with the River Trent standing in for the Rhine. One of the old tank ramps is still in place on the riverbank having been restored by Burton-upon-Stather Heritage Group. As they say on their website, this is appropriate, as the word ‘stather’ comes from the Viking word ‘staithes’ meaning landing stage.

In the 1939 world, fans are queuing up at the flicks to see Formby’s latest film Trouble Brewing, his big song is ‘Imagine Me on the Maginot Line’, King George VI resolves to stand by his country and ‘Bomber County’ is buzzing like a proverbial beehive.

“Back then people just got on with it and if you didn’t have it you did without. I like to think that the old king is still on the throne and I prefer to listen to the George Formby of the films not the older man of his later years,” said Jo.

Jo has spent years bringing her Victorian terrace up to spec – when she moved in she actually had a Jacuzzi and shower ripped out.

She follows the Dig for Victory regime of growing your own vegetables and her day-to-day dress ranges from immaculate Mrs Miniver to Land Girl workwear as she tackles the daily grind of household chores and gardening. Cooking is done on a cast-iron range; Wash Day is on a Monday, and you bath once a week in a galvanised tin bath. In winter-time butter can be as hard as a brick; in summer milk is kept chilled in a bucketful of water. Otherwise food comes in good old tin cans.

She jokes that years of this have only left her with “blacker hands.”

Jo even gets about on a period single-speed bicycle with rod brakes, even though she lives at the foot of Stather Hill.

All the windows are criss-crossed with white tape, the front door has a Blackout curtain, and Jo even has an Anderson air-raid shelter on order.

The 1939 House could only be more complete if you moored a barrage balloon in the back garden.