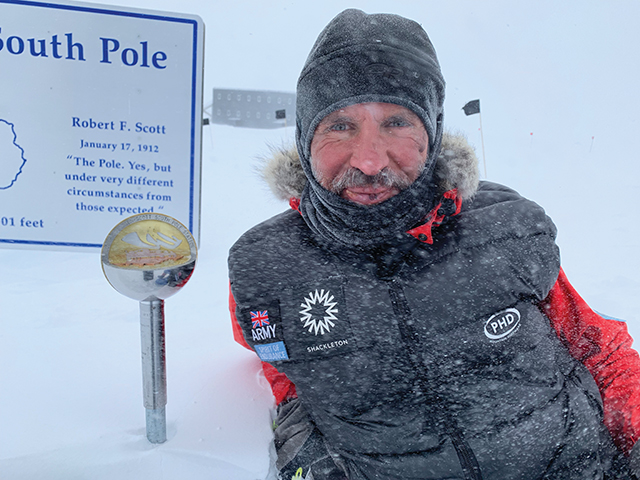 Inspired by Scott, Shackleton and Amundsen

Completing the epic feat on 28th December 2018 he became the first Briton and only the second person ever to finish the gruelling 1,500km journey – arriving at the finish line just two days after American athlete Colin O’Brady.

It took the Army Captain, who was 49 at the time, 56 days to carry 140kg of kit and food supplies in his pulk across the barren landscape of Antarctica, where temperatures dipped to a chilling -40 degrees Celsius.

“It wasn’t until January last year that I really thought about taking this on,” recalls Louis, who had previously completed three major polar expeditions.

“I love the raw untouched beauty of Antarctica, where there’s so little sign of the impact of mankind. I love being out there completely self-sufficient and being able to travel without outside assistance.

“Coming in second to Colin has not made the slightest bit of difference – I completed what I set out to do and that was to ski across Antarctica unaided and unsupported.”

Louis, who grew up in Whaplode, near Spalding, jokes that his own quick arrival into this world – he was born in the middle of a blizzard – has stood him in good stead for his future endeavours.

He attended the village primary school, before moving to Ayscoughfee Hall School, in Spalding, and then onto Spalding Grammar School.

At 16, inspired by his stepfather who had been a member, he joined the Marines where he spent six years before transferring to a specialist Army unit.

He served in all the major conflicts including Northern Ireland, Kosovo, Iraq and Afghanistan working his way up through the ranks and currently serves as an officer, working in an infantry battle school in Brecon, Wales, helping to deliver training.

“I’ve always been interested in polar expeditions across Antarctica,” he recalls. “My earliest recollection is from secondary school, I got myself in a bit of bother after messing about and got sent to the headmaster.

“I was sat in the reception office, waiting to get the cane, and pulled this book off the shelf. It was a Ladybird book about Scott of the Antarctic.

“I can remember flicking through and just being completely engrossed by this story of Captain Scott and his team on their way to the South Pole and their tragic journey.

“I went on to read a lot about Scott, Shackleton and Roald Amundsen during my teenage years and I just had this huge desire to go down to this place myself to experience it.”

It wasn’t until 2011 while serving in the same unit as Lt Col Henry Worsley that Louis was able to realise his ambition. His colleague had come up with the idea of The Scott-Amundsen Centenary Race to replicate the same routes 100 years after they first set out.

Louis applied for a place and was picked to complete the Norwegian’s journey alongside Worsley, an experienced polar explorer himself.

In 2017 he returned to Antarctica to lead his own six-man team on SPEAR17 – a complete 1,100-mile crossing of the continent – for which he was awarded an MBE.

The following year he completed his third crossing, traversing 570km west to east across the Greenland ice sheet.

Still the feat of skiing across the driest, coldest, most inhospitable place on the planet had yet to be realised and it was the attempts of others who tried and failed – including Henry Worsley, who tragically passed away during his own attempt – that inspired Louis to take on the arduous journey himself.

Five days before he was due to leave for the Spirit of Endurance trek he discovered Colin O’Brady was taking on the challenge at the same time, but he vowed not to get drawn into a race.
“I started planning in a very short space of time and got the money together,” explains Louis, whose expedition was backed by the Army.

“To get in shape I started tyre hauling. I now live in Hereford and would spend two to three hours at a time dragging an old Land Rover tyre behind me along the river bank. Without going somewhere with skis it replicates the right action, uses the same muscles and builds up stamina and endurance.

“Other gym work included strength and conditioning, deadlifts and squats and running, and some skiing when there was the chance.”

During his expedition he burnt 10,000 calories each day, consuming around 6,000. Meals comprised freeze dried porridge, chicken tikka and spaghetti Bolognese, which were rehydrated using boiled melted snow, and grazing bags of snacks including Dairy Milk, cheese, salami and nuts.

Louis skied for 12 to 13 hours each day and only made short stops for a drink and to check his equipment.

“Temperatures got down to -40°C, which just makes everything take longer and more difficult. You can’t have any part of your body exposed,” Louis explained.

“There were a few incidents. One day there was a whiteout, where I lost all visibility. I couldn’t see the ground or the sky, I lost the horizon and I skied off a big chunk of ice, which had a six-foot face on it.

“I face planted, split one of my skis and then my pulk, weighing about 90kg, came over and landed on top of me.

“I was 1,000s of miles away in the Antarctic. I could easily have broken my leg or injured myself. Luckily, I was just battered and bruised.

“Another time it had snowed all night and the next morning there was lots of soft snow, and I couldn’t drag the pulk. It was sinking into the snow, so I took half the load out of it and left it, with a marker and then skied a couple of miles, left my current load, went back to fetch the rest and kept doing that during the day. I was skiing three miles to go forward one.

“Later there was a whiteout and my ski tracks had been obliterated. When I was back-tracking to fetch my tent and sleeping bag I spent around two hours trying to find them, that was particularly dangerous.”

Thankfully Louis completed what he set out to do, arriving at the end just two days behind Colin O’Brady, who was there to greet him.

“I didn’t want to get into a race, the journey is difficult enough as it is – and no-one had ever completed it before. I didn’t want to push too hard and not finish at all,” he adds.

“We were the first two guys to do it, which I’m elated with.”

Although he’s only been home a couple of months, Louis isn’t ruling out a return to the polar regions, although for the time being he’s focussing on his day job and the raft of public speaking opportunities coming his way, including a trip back to Holbeach to address the Army Cadets, where he had his own first taste of military life.

He’s also promised his wife Lucy that he will be home this Christmas, after spending three of the last six out on expeditions.

To find out more about Louis’ expeditions visit his website www.lourudd.com