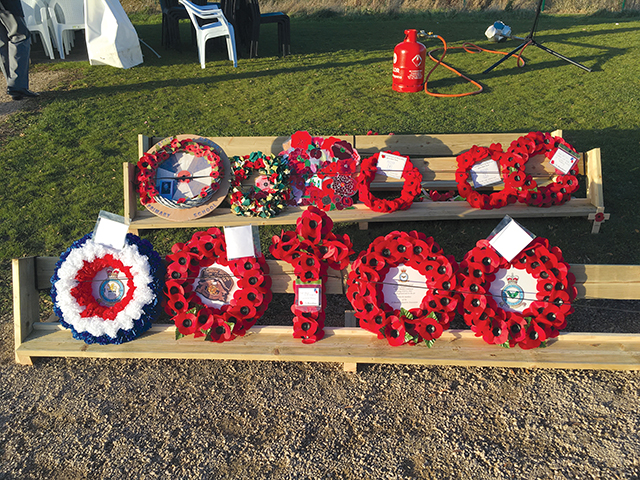 From its inception at the end of the First World War, Remembrance Day has grown to be a truly international affair. Marking the loss of life caused by war and the sacrifices made by so many continues to play an important part of the ceremonial structure of 25 nations.

Whilst many hold services on Remembrance Day, on 11th November, and others on Remembrance Sunday, some other countries have used different dates throughout the year, but all with the same purpose: honouring the dead, paying tribute to all who served and are serving and praying for peace.

At memorials across the country people will gather together in ceremonies on Remembrance Sunday, buglers will play the Last Post and Reveille, prayers will be said, and wreaths will be laid. The IBCC is no different and will be holding its 5th annual Service of Remembrance on 14th November. An important part of our service is the Roll of Honour, where volunteers read out the names of every Bomber Command veteran who has passed away in the preceding 12 months. For many at the IBCC, this is particularly moving as many of those named will have been well known to the team. We will be joined by personnel from local RAF stations, representatives of associations and local business representatives. If you, or your organisation, would like to lay a wreath as part of the service, please email events@internationalbcc.co.uk

In addition to this service, we have a special ceremony which is created for primary school children. In 2019 almost 750 children from 12 schools joined us to remember. Each class had made their own wreath and had nominated children to lay them at the foot of the Spire. It has normally been held on the Friday before Remembrance Sunday but, as with so many things, Covid interrupted proceedings in 2020, and meant that the ceremony had to be brought forward and include children from only one school. The ceremony was filmed and sent out to schools that had pre-registered with the result that 1,100 children from three countries were able to be part of the service.

This year, to enable even more schools and groups to take part, local company Wallbreaker will be filming the service on Wednesday 10th November, ready for broadcast, through our YouTube channel on 11th November. If your school would like to take part, either at the Centre or virtually, please contact our Learning Team on 01522 514755 or learning@internationalbcc.co.uk

As part of this service the children will each be provided with a biography of an individual who is listed on the Walls of Names. These biographies have been created by a team of IBCC volunteers and have taken five years to research and build. They have now compiled over 2,000 of these snapshots into the men and women behind the names, and they are still working on others. They help to connect the children with the people of Bomber Command, bringing them to life and engaging them in their stories. This is core to the work of the Centre. It is about the stories of those who were there. An example of these is on the panel to the right.

Just outside the main hangar at the Lincolnshire Aviation Heritage Centre at the wartime airfield at East Kirkby is a plaque marking the crew of a 9 Squadron Lancaster which was lost without trace during a bombing raid on the night of 21st/22nd May 1944.

The navigator was James Gledhill, who had been with the squadron at Bardney for a little over six weeks before they were all killed during an attack on Duisburg. At 23 he was one of the oldest members of the crew – the average age of his six colleagues was 21 – and they had flown operationally a number of times since arriving with the squadron on 4th April from a heavy conversion unit.

On the night of 21st May they took off on board Lancaster DV395 WS-T, part of a force of 510 Lancasters heading for the biggest raid on the Rhineland city for almost a year. Twenty-nine bombers failed to return, including DV395. No trace was ever found of aircraft or crew and the possibility was that it was lost over the North Sea.
James lived with his wife Margaret in Westminster in London and he was the son of Ernest and Ellen Gledhill. He is now remembered on the Runnymede Memorial.

His name can be found on panel 040. Sources: Bombers First and Last by Gordon Thorburn/War Memorials Trust/Peter Green collection.