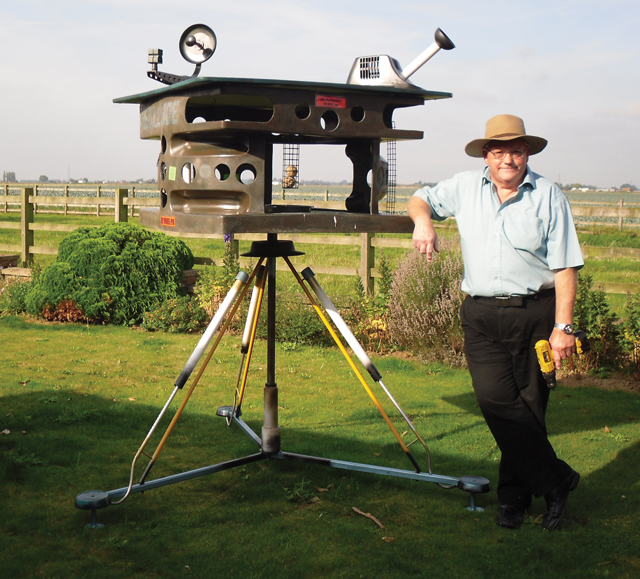 Inventions for the lighter side of life

Described as ‘possibly the best English eccentric inventor living today’, John Ward is having the last laugh, after recalling how a teacher told him his stupidity would never amount to anything.
Flash forward more than thirty years, and his crackpot contraptions, including the bra-warmer, mobile church font, motorised hospital bed and musical frying pan have gained him notoriety all over world, with appearances on television in America, Japan, Australia, Russia and New Zealand as well as numerous media appearances at home.

His catalogue of weird and wacky inventions, which also includes the Thunderbird Rabbit Rocket and Survival Bicycle complete with snow plough, umbrella, barbecue and flotation tubes, have also led him to be featured in several academic studies examining the relationships between eccentricity and creativity.

“I used to fool about at school and play the class clown,” said John. “For a bit of fun on my last day I filled the toilet cisterns with washing-up liquid, there was all this foam, and no-one could fathom out where on earth it was coming from.

“When I left school my teacher came up to me and said ‘This is the last time I shall see you John. There’s no place for your stupidity in the real world.’ How I’d love to meet him again now!”

A self-taught engineer, John’s love of creating goes back to his childhood. While growing up in Northamptonshire he spent his time playing with Meccano and taking every device he could get his hands on to pieces, before attempting to re-assemble it.

On leaving school he began an apprenticeship as a painter and decorator, but after six months decided such a life wasn’t for him. Jobs as a cinema projectionist, welder, Government official and many more followed, before he found his true vocation – as an inventor of all things weird and wonderful.

John, who now lives near Spalding, began his zany adventure in the early 1970s, when he and a team of co-workers attempted to pedal across the English Channel on a machine made from eight oil drums sawn in half and parts from five Raleigh bikes.

Sadly they barely made it further than twenty feet, but nevertheless it gave John a taste for more crazy escapades, which he followed up with the Tri-bath – a vessel made of three old bathtubs set together on a frame, which he and his children paddled down the river.

“It all stemmed from the attempt to cross The Channel really,” he said. “I got asked what I was going to do next, but I never really thought about it.

“Then I started to get a bit of a reputation as a recycler – anyone can spend money, but I like to get something done without spending any if I can – the Tri-bath cost me less than a tenner to make.

“Then I’d made all this play equipment, like a see-saw and electric buggy for the kids, all out of junk that was going to be thrown out, and I got a call from Pebble Mill, asking if they could transport it to their studio.

“This was in the 1980s, and then people got to know about me and started bringing all their old stuff round that they were going to throw out.

“One Saturday afternoon this chap turned up with a canoe, motorcycle sidecar and an ironing board, while another month I had seven washing machines passed in my direction.”

Other creations in John’s bizarre back catalogue include The WoganMobile – a helicopter car with a Metro engine and gearbox, built of garbage that could legally be driven along the road; the Window Cleaner’s ladder bicycle – a bike which can be ridden, but when turned through ninety degrees becomes a handy stepladder; and the Bod Pod – a spaceship shaped pod for towing behind a car with a spare passenger or child in it.

As well as inventing, John has also designed two new Malcolm Hardee Awards for comedy, which will be presented annually at the Edinburgh Fringe until 2017. He also undertakes public speaking, private commissions, and is a motivational guest lecturer for science classes.

On top of this his resume also includes promotional work. He helped launch the Ford Focus at the UK’s premier motor show in Birmingham and has also done prop-making, store displays, county shows and exhibitions, for which he can custom build one of his contraptions to meet requirements.

During the 1980s he was officially appointed Minister of Inventions for the Monster Raving Loony Party after a chance meeting with the late Screaming Lord Sutch, and created the Manifesto Muncher, which turned other political parties’ manifestos into toilet rolls.

When it comes to his designs, John takes his inspiration from all quarters, including the unusual collection of items lying about in his shed, while the inventions themselves can take anywhere from an afternoon to a decade to become reality.

Having moved to Lincolnshire following his divorce, John has been embracing the countryside around him, and has designed a series of eye-catching bird feeders including a Star Wars themed one, and another affectionately named the Church of St Elsie’s, where his attention to detail is second to none.

“We are surrounded by birds and they fill our garden, I suppose that gives the spark to make them,” he explained. “St Elsie’s is made from marine waterproof plywood on a wrought iron base. The main structure is waterproof MDF, carved by Stanley knife – it took ages as each stone was carved then coated in a ‘home brew’ of waterproof ‘stone’ paint/texture. The notice board is in oak, the clock tower houses a real working quartz clock movement, the ‘pews’ hold the bird seed and the ‘font’ is the water bowl!

“I really couldn’t have imagined where all this would take me – I’ve been on Good Morning America, CBS – I just couldn’t get my head around it, I was stood on Broadway. It’s just crazy, but it’s been great fun.

“I’m a self-taught engineer, just picking things up along the way.”

It’s got to be said, we could all do with taking a leaf out of John’s book sometimes – after all, it’s much more fun to look on the lighter, brighter side of life.

So what’s next? Well, this summer he has had enormous fun launching the inaugural World Cabbage Hurling Championships as part of the Holbeach Country Fayre which was held in June, designing two massive seven-foot-tall catapults to propel the veg into mid-air, with prizes for distance, team effort and juniors.

And as for his next inspired invention, I’m afraid he has sworn me to secrecy, but given that it’s been some ten years in the pipeline, I’m pretty sure it’s going to be nothing short of spectacular.

* To find out more about John’s work visit his website www.johnwardinventor.co.uk