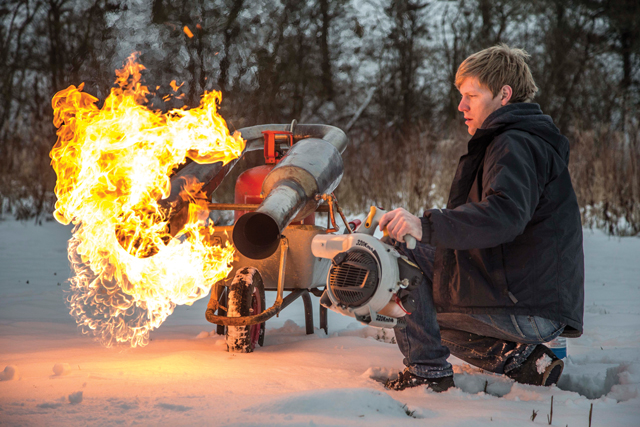 Inventor, stuntman, television presenter – it’s all in a day’s work for Colin Furze

Self-taught engineer Colin has gained a massive cult following as a ‘garage inventor’ and is the proud owner of several Guinness World Records for his wacky – and sometimes explosive – creations.
Colin’s passion for creating the weird and wonderful goes back to his childhood, when he spent hours taking things to pieces to see how they worked. One of his first inventions was a device for his BMX bike that allowed him to operate both brakes from the same handle.

“It’s weird really, most people presume I’ve been inventing and making things in the garage for years and years – but when I lived at home I wasn’t actually allowed in there until I was about twenty-seven,” he said.

“During my years as a plumber I designed a few tools for the trade, making them in my bedroom, as that’s where I fixed stuff – I even had a lathe in there at one stage.

“I suppose I’ve always been into taking stuff to pieces and putting it back together, although not always necessarily with great success.”

Colin, who hopes his work is helping to inspire the next generation of young inventors, describes his creations as a cross between the best of Top Gear and Scrapheap Challenge with a bit of Jackass humour thrown in for good measure. He takes his inspiration from all quarters, and explains he often looks to what his peers have done, and either tries to improve their designs, or ultimately go one better.

He claimed his first world record on his birthday in October 2006, when he created the world’s largest bonfire using 24,000 wooden pallets stacked together, which he lit with a rocket and a blowtorch.

For another he replaced the electric engine in a mobility scooter with a motorbike’s 125cc engine which enabled him to hit a top speed of 71.59mph – thus claiming the title for the world’s fastest mobility scooter. It’s thanks to this feat that he’s also been called on to star in a couple of television commercials for Aunt Bessie’s and Jackpot Joy, which feature zippy scooters.

Colin also holds the record for creating the fastest pram, the fastest toilet and the longest motorcycle; plus he’s built his own wall of death, which he rode around without a helmet; and the world’s first jet engine barbecue.

“I try and do a world record every two years. Somebody just gave me the mobility scooter – they were going to chuck it away – and I was looking at it, wondering if there was a speed record and I ended up opening that category,” he explained with a chuckle. “It was the same with the fastest pram.

“The ideas come from all sorts of places really. When I made the jet engine barbecue, I looked at what other people had done, and the most common thing seems to be to put them on a go-kart.

“Some had done it really well, so I had to say ‘What can I do to that to make it better?’ So I thought about something completely different.

“And the heat from the fumes that come off it led to the barbecue – I like to look for a different angle, something that’s not been done before.”

Colin also gets a lot of suggestions and feedback for future projects via his YouTube channel, which has more than 140,000 subscribers. He regularly posts videos and clips of his stunts and creations, as well as ‘How To’ make guides, which has led to him developing quite a following.

“YouTube has really helped me build up an audience,” he explained. “Some of my older videos on there were done before it even existed. But if the internet was not there, I’d still be doing this – I don’t just make things for the web, although you have to think about it, as it can really open up more doors.

“Because of the YouTube channel, when I go to scrapyards now I get given stuff, as people recognise me. They’ve seen the videos and they’re interested in what I’m doing,” he said.

Over the years he has shown his inventions on Canadian and German television, as well as here in the UK. He was chosen to front Gadget Geeks on Sky, which explored the world of inventing.

Although, not all of his creations have been quite so successful – he escaped a brush with the law in 2011, when he was arrested for riding a flame throwing motorbike; thankfully he is now able to laugh about the whole episode.

“I try not to take it all too seriously,” he said. “I didn’t set out to be a TV presenter, that’s not the end goal, but if it happens it happens.

“I just continue to make weird stuff in the garage – and whatever comes of it, well that’s a bonus. That’s the best way to look at it. If you force things you can end up doing things you don’t want to.”

Colin also likes to hope he’s helping to inspire the next generation of engineers, by proving you don’t need formal qualifications or expensive tools and materials to get creative.

“I made a jet engine which didn’t need to be welded together. I wanted to put it across to people that, although it seems a complicated process, if you have got some of the tools, and can use them, and you’ve managed to collect the stuff together you probably have the ability to do it.

“Engineering teachers have shown some of the videos to their classes and they say the pupils find it more engaging than textbooks – and that’s all I can hope for.”

So what’s next for our intrepid inventor? Well he recently finished his Cake-o-matic creation – a device that whizzes round with multiple spoons attached, to constantly feed its user cake and he’s also judging a competition, seeking out new talent.

To help inspire the entrants, Colin’s creative brain has been working overtime and he’s developed the Hoover shoes – which allow their wearer to vacuum the floor while they walk along.

The device was trialled with a local hairdresser who was able to suck up a client’s hair while cutting it, although even Colin admits he’s not sure if this one will catch on.