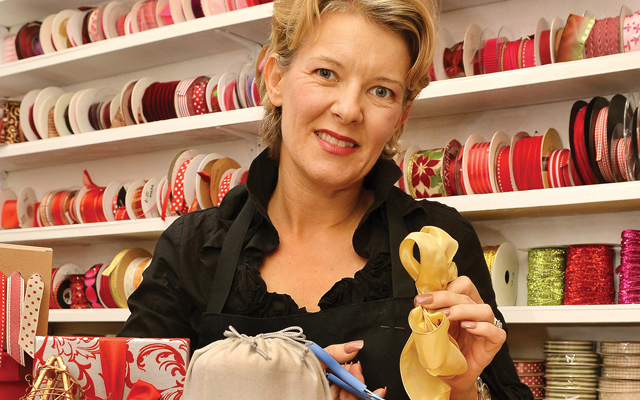 Jane gets Christmas all wrapped up!

Christmas has come early for one of Lincolnshire’s favourite daughters – gift wrapping guru and ribbon designer Jane Means – whose talents have led to an unprecedented demand for her services.
There’s little wonder. After a challenging year, 25th December is definitely going to be as much about giving and receiving fabulously-wrapped presents which cause squeals of delight, as the magic of discovering what lies inside.

Just ask Jane, who lives in London but who regularly returns to the county. Her breathtaking schedule means she is juggling teaching top retailers’ staff how to add a fantastic flourish to customers’ gifts, with television and radio work, demonstrating at major shows and running courses around the country!

I managed to catch up with her while she was giving a dazzling demonstration to visitors at this year’s superb Spirit of Christmas fair in London’s Olympia, and left with some hot tips for Lincolnshire Life readers.

“This has definitely been my busiest Christmas season so far and it crowns an extremely exciting year,” said Jane. “Top London stores are keen to offer their customers added value and I have been busy working with the big players, such as Liberty, Fortnum & Mason and Harrods, and training store staff in special wrapping techniques.

“I am finding myself increasingly working within celebrity and Royal circles. At the end of October I was filmed exclusively by the BBC in Harrods, alongside Hotel Inspector Alex Polizzi, the niece of Sir Rocco Forte – demonstrating luxury giftwrapping in a stylish setting.

“This year, in another first for me, I have been demonstrating gift wrapping in Liberty’s window, as a prelude to running a series of festive courses in this famous London store.

“Much more media work has been coming my way and I especially love doing live television, rather than pre-recorded, but also doing regular sessions on Radio Lincolnshire every six weeks.”

Jane started out eighteen years ago, working from a kitchen table in the village of Kirkby Green, a short distance from Sleaford. She ran courses showing people how to make greetings cards, then moved on to teach gift wrapping and she has more recently expanded to design and sell ribbons – a move which has brought added fame. Jane’s talents landed her a whole chapter in Kirstie Allsopp’s Kirstie’s Christmas Crafts Book and Jane is looking forward to doing more work with Kirstie in the not too distant future.

“Although I’ve not met her personally, I think she is a lovely person. What you see is what you get, she has the girl next door type of personality and hopefully we shall get together soon,” said Jane.

Jane’s ribbons also featured in this year’s Great British Sewing Bee, another great coup for the Lincolnshire lass, and she hopes they will also be used in another series.

And Jane is thrilled that her designs, including her Christmas ranges, are also being stocked by Liberty and Fortnum & Mason – but they can also be found at her Haberdashery Closet at St John’s Craft Workshops in Bracebridge Heath. The Closet is open on Wednesdays and Saturdays from 10am to 1pm.

But back to Jane’s take on Christmas 2013. What are the hottest colours and trends when it comes to ensuring yours are the best-dressed presents under the Christmas tree?

“Well more people are definitely watching the pennies this year and, as a Lincolnshire farmer’s daughter, I know that pennies matter so it’s all about being really creative, using remnants and matching up different materials,” said Jane.

“It’s the thought that counts and I think you can buy reasonably priced gifts and, with a little time and practice, make them look like they are very expensive and luxurious.”

Of course, you might want to think carefully before you splash out in an unguarded moment and end up buying a present that’s a real challenge to wrap professionally!

“My most difficult challenge was demonstrating wrapping up a rocking horse in front of a Country Living Show audience. It took about four rolls of paper and I actually had to get people who were watching me to hold bits in place, while I did it. It was a nightmare!

“The trend in present wrapping this year is centred on the traditional, comforting, homespun look, which takes you back to your childhood. Everyone loves a story and memories and family are very much to the fore. The top colours are red and green.”

Jane’s parents David and Christine Means still live in Lincolnshire, along with many friends, so with the festive countdown firmly underway I wondered whether she would be spending Christmas in Lincolnshire and how Jane would love her own presents to be wrapped.

“Well, by the time I get to Christmas, I’m sick to death of wrapping gifts and so there is a tradition within my family where we have lots of fun wrapping presents really badly… and that’s quite a relief,” said Jane.

As for ‘coming home’ for Christmas, sadly Jane will be miles away – but we cannot begrudge her that because she has the perfect excuse. After getting married to David on 20th September, she is jetting off to Tahiti on honeymoon – now that’s got to be the ultimate festive gift!