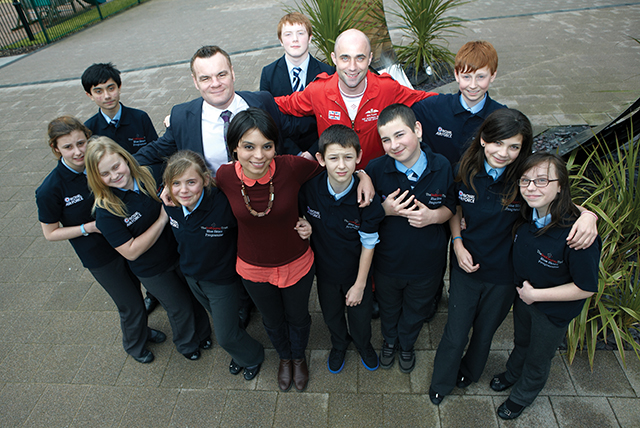 Barbara Young meets Emma Egging, who set up the Jon Egging Trust in memory of her husband, a Red Arrows pilot who died in a tragic air accident, with the aim of helping young people better their lives.

Founded in 2012, the Jon Egging Trust (JET) operates UK-wide and supports more than 10,000 young people each year in their search for a secure and fulfilling future.

Set up following the death of her husband Jon, who was part of the Red Arrows aerobatic team, chief executive officer Emma Egging has long championed the need for programmes which enable young people to be inspired and gain teamwork, leadership and employability skills.

Before setting up the charity, Emma was a project director at the British Museum in London as part of the Community Partnerships team, which included working with vulnerable young people aged 13-26.

Emma’s “dream job” saw her managing a project connecting the museum’s collection of outstanding objects from around the world with young people from some of the most deprived boroughs in London. It was during this time that she set up the museum’s first Youth Panel called BMuse and realised the value and importance of young people’s views and contributions.

“While I was working at the British Museum, Jon was flying the Harrier based first at RAF Wittering and then RAF Cottesmore, before being selected to join the Red Arrows in 2010,” explains Emma.

“Jon did what he could to show young people from local schools and clubs around the squadrons, but he wanted to do so much more. His aim was to open up the bases in a more formal way, to connect with young people in the local communities.

“When Jon died, so many people he worked with or trained as pilots asked me what they could do, so I decided to ask them to help bring Jon’s vision to life and set up the charity.”

A lasting legacy
Emma says that after Jon’s death in 2011 when she first voiced her plans to set up a charity, many people told her not to bother as “most charities crumbled” after a few years.

“Some thought it was just a knee-jerk reaction to dealing with the loss of Jon,” says Emma, “but I’m the type of person who doesn’t let negative opinions get in my way. The fact that some people didn’t believe in me made me even more determined to set up JET and ensure it was able to support young people in the way that I knew they desperately needed.

“Ignoring the people who wanted to pull me down, I found people and organisations who believed in JET’s vision. This trigged a snowball effect; the more we did, the more we got asked to offer our programmes to new areas and the more organisations came forward to get involved. The Royal Air Force has been a huge supporter and enabler for JET – from day one.”
Emma describes Jon as “a very normal boy from a normal background who wanted to do big things in his life”.

“He failed his first set of exams to be a BA pilot and if it wasn’t for a couple of individuals who helped raise his confidence, encouraged him to work hard and believe in himself, he would never have picked himself up after falling at the first hurdle.”

Emma says her husband not only understood the importance of raising young people’s confidence but was also a believer in the power of teamwork.

“Jon was a highly professional individual and a strong leader, his version of leadership was about caring for the team and supporting those around him to bring out their talents and attributes, to be the best version of themselves. He believed in the power of young people and wanted to help the next generation to get through whatever challenges they may be facing to ensure they were able to go on to achieve. This ethos is the foundation on which JET was built and continues to operate.”

Blue Skies and Inspirational Outreach
JET, which sets out to work with schools to support individual students and is currently involved with seven schools in Lincolnshire, from Gainsborough to Boston, also connects with five military bases in the area, as well as three corporate companies.

JET’s Blue Skies programmes in Lincolnshire are delivered in collaboration with RAF stations and corporate partners, which allows students the opportunity of visiting places they may not have imagined possible before.

“Our full Blue Skies programmes are delivered across three academic years with each of the three levels consisting of 10 sessions, eight of which will be away from the formal education environment where many of our students struggle to engage,” explains Emma.

“Students might experience life as an air traffic controller, or get put through their paces by the physical training staff from RAF Waddington in a team building challenge.

“Sessions are so varied and have even been known to include a visit to the RAF Cranwell Equitation Centre to benefit from equine therapy and the RAF Red Arrows to experience the fast-paced world of the aerobatic team! Whatever the sessions, students can always expect to be challenged to push themselves to try something new.”

The Inspirational Outreach initiative enables the JET team to work with larger numbers of young people by creating bespoke, one-off sessions in or out of school.

“The students we work with at the Trust are at risk of dropping out of education or not achieving their full potential due to no fault of their own,” says Emma. “Often they are lacking confidence in their own ability, or have low aspirations for their futures. Whatever is going on in their lives, the students are given the chance to leave this behind on the sessions and focus their attention on building resilience so that they may face the challenges that come with their circumstances with increased self-belief.”

JET’s programmes, which span rural and urban areas in Lincolnshire, recognise that the challenges students face is varied.

“So many of our students don’t know what opportunities sit on their doorsteps and it’s vital to local industry that they are made aware of these along with the wider potential,” explains Emma.

“A lot of youth support is focused on areas of deprivation connected to cities. In the areas where we operate, which can tend to be quite isolated, there are pockets of real need, but comparatively little on offer to support young people.

“As a result young people from these communities tend to lack aspiration and the opportunity to develop their skills and talents and be the best that they can be, which is where the Jon Egging Trust steps in.”

Emma explains that the impact of Covid-19 on young people’s lives has been as individual as the effects of the virus itself.

“In the same way that the nation’s approach to home working has been forced to change, so too the pandemic has reshaped the way young people see education. While the aim of the Trust has always been to help young people at risk of falling out of education re-engage with learning and stay in school, our vision has also been to help them identify their strengths, set them on the best career path and enable them to be the best they can.

“According to a report published by the Youth Employment Group, 760,000 young people were not in education or employment before the pandemic and there are fears that there will be an additional 640,000 unemployed 18-24 year olds by the end of the year.

“This means that no matter how hard students and teachers work to keep learning on track, the future job situation is looking very shaky indeed. Supporting young people not just to get good grades, but helping them get a foot in the door in the jobs market, helping future generations be more employable, is more important than it has ever been.”

Student case study
Josh Dale, 20, from Lincoln: “The Jon Egging Trust has been a big factor in my life and helped me reach places I didn’t think possible. Before the Trust, I had trouble retaining information for long periods of time and would spend free time alone in my room playing computer games.

“This changed when I was introduced to JET in 2013 and learned the key skill of teamwork, which helped me break out of my shell.

“The next part of the programme was leadership and I decided to join my local Air Cadet Squadron where I learned the skills of leading a team and this allowed me to understand how to handle myself better and become more responsible.

“In my third year, I was lucky to spend some time at RAF Scampton, where the Red Arrows are based, and I learned about working life and what it means to be a professional.

“I still use these skills today, mainly asking myself what I can do better and the steps I need to take to achieve my future goals.

“JET also taught me that when things don’t work, it’s always possible to find another way. The most memorable part of the programme was meeting and listening to RAF members talk about themselves, their jobs and how/why they got there.

“After school I got a place at the University of Lincoln to study computer science – learning to design the computer games that I used to spend so much playing, and a year later transferred to project design. Without JET, I wouldn’t be doing any of this.”