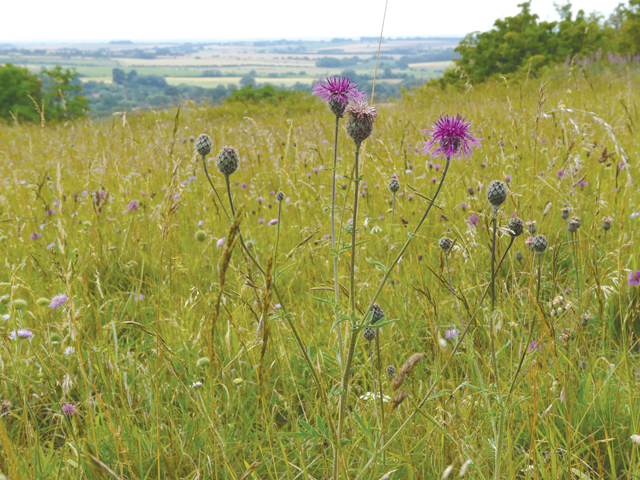 Jewel in the crown

The narrow lane snaking along the ridge towards Goulceby in the Lincolnshire Wolds has wide unmown verges full of rough grass and wild flowers which provide a little taste of what lies ahead.
The road briefly drops down into Asterby before climbing again past steep sections of exposed red chalk and on to the ridge above where, perched on a site commanding stunning views across the Wolds, you will find one of the few examples left in the county of flower rich grassland.

To the east of the small parking area is the original Red Hill meadow, a fragment of the traditional chalk downland pasture that once covered large parts of the Wolds. This ancient landscape dates back several hundred years and, reflecting its ecological and cultural importance, has long been designated a Site of Special Scientific Interest (SSSI). On the other side of the road is a meadow, known as the Red Hill Extension, whose origins are altogether more recent. Together they make up the Red Hill Nature Reserve which recently received the accolade of being named Lincolnshire’s Coronation Meadow.

In 2013, the 60th anniversary year of the Queen’s coronation, the Coronation Meadows project was set up to identify sixty flagship meadows across the country to stimulate the restoration of old meadows and the creation of new ones. Lincolnshire’s own ‘champion’ meadow is a fine example of flower rich chalk downland and between April and September it is a constantly changing mosaic of wildflowers that is best appreciated by visiting several times throughout the season.

In spring and early summer there is a flush of yellow starting with the cowslips and continuing with bird’s foot trefoil, kidney vetch and yellow rattle. Towards the end of June there is a brief lull (apart from the kidney vetch which just keeps going) before the mauves and blues of scabious, meadow clary and greater and lesser knapweed begin to make their presence felt. This is no designer palette though and dotted about you will find small groups of flowers such as the blue pasque flower, white flowered common spotted orchid, wild pinks and many more that have all found their niche in this intricate floral tapestry.

The Coronation Meadow project was inspired by a report published in 2012 by the charity Plantlife, called ‘Our Vanishing Flora’. It highlighted the loss of wildflower species across the country, largely due to the disappearance of ninety-seven per cent of the nation’s meadows within just seventy-five years. And it is not just the decline in native flora that concerns naturalists, ecologists and farmers alike but also the corresponding loss of habitat for wildlife, such as birds, insects and small mammals. Aside from the environmental impact, the potential economic cost to agriculture of the decline in pollinating insects, particularly bees, is increasingly being recognised and valued in the hundreds of millions of pounds.

As well as bees, many other often rare insects, such as the six-spot Burnet moth, the small blue butterfly and the marbled white butterfly enjoy this nectar rich habitat; sometimes smothering the flowers almost entirely in greedy clusters that then wave back and forth on wiry stems. Many insects are very specific about what plants they choose to lay their eggs on (and that will later become the food plant for newly emerged caterpillars) and so ultimately a varied population of wildflowers at Red Hill will provide a vital habitat for many species, including some that are considered threatened.

The Red Hill Nature Reserve is one of several dozen sites across the county managed by the Lincolnshire Wildlife Trust and covers about sixty acres. The original meadow was part of the traditional ‘sheep walk’, an area of open grassland where sheep were allowed to roam freely, which covered large parts of the east of England for many centuries, and which has now largely been lost to arable farming. The Trust manages the meadow in much the same way as it would have been, allowing livestock to graze in late summer and autumn, thereby both distributing seed and keeping the soil’s fertility down.

What is remarkable is that much of what is now meadow to the east of the car park, the Red Hill Extension, was until quite recently used to grow barley. In 1994 the Trust bought this land from a local farmer and charged its volunteer reserve manager, Harry Turner, with creating a flower rich chalk downland. The Trust’s current Mid-Lincolnshire warden, Kevin James, who oversees Red Hill, along with twenty-five other sites, credits Harry’s efforts with the success of being selected as Lincolnshire’s Coronation Meadow. For fifteen years, he has collected tens of thousands of seeds from within a six-mile radius of Red Hill – all from land managed by the Trust or with permission from the landowner – and has then either manually seeded the field or grown the plants on as small plugs before planting them out. He is personally responsible for growing and planting out over 30,000 wildflower plants, including 5,000 cowslips and 8,000 bird’s foot trefoil.

The initial task of converting the arable land into a meadow involved sowing appropriate species of meadow grass; fine leaved, tough varieties such as red fescue, sheep fescue and crested dogtail. The soil at Red Hill is naturally poor, just a few inches of topsoil over chalk, which these types of meadow grass, along with their wildflower neighbours, thrive on. Many decades of farming, though, and the intensive application of fertiliser, left high levels of residual fertility that took many years to slowly reduce. This happened both naturally, over time, and as a result of the Trust re-introducing traditional methods of meadow management, such as seasonal grazing, and the introduction of appropriate wildflower species. In particular the spring flowering yellow rattle has played a vital role, sown early on because it is parasitic on grasses, reducing their vigour to a point where the wildflowers can begin to compete.

To fully appreciate the meadow it helps to immerse yourself in it. The experience is more subtle than a visit to a beautiful garden, where large bright blooms grab your attention. Here the effect is more delicate, with innumerable small flowers and grasses gently bobbing and swaying into the distance while butterflies, moths and bees flit silently from plant to plant. Walking through the meadow you may catch sight of a pyramid orchid or an autumn flowering gentian, half concealed in the grassy sward, and from midsummer the crisp round seed pods of the yellow rattle will indeed rattle as you pass.

Work at Lincolnshire’s Coronation Meadow is ongoing and a balanced, rich habitat is slowly being restored as a varied community of plants and animals begins to thrive. In late summer a small herd of Lincoln Red cattle arrive for their annual graze, followed later by the sheep which will remain through the winter. One of the purposes of the Coronation Meadows is to act as seed banks of locally important wildflowers and Red Hill is already fulfilling that promise by providing seed for other sites in the county.

The Trust has also recently begun to restore to meadow another four acres at Red Hill, part of neighbouring Badger Farm, so won’t have to go far to source the seed for that. The plans include a small car park and some paths to allow visitors to fully appreciate the landscape and stunning views and a visit is also likely to include the sight of a certain Harry Turner, seedlings in hand, continuing his impressive work for the Lincolnshire Wildlife Trust.