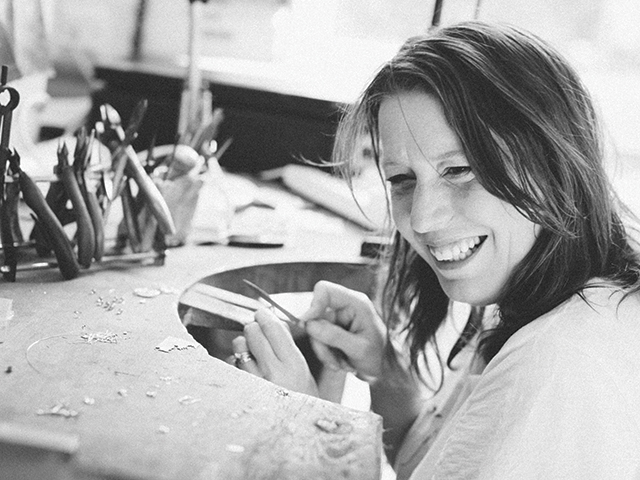 Jewellery reflects wonder of the world

Inspiration is everywhere for jeweller Amanda Coleman, whose intricate work in precious metals beautifully captures the nature and wildlife so abundant around her Lincolnshire home.
Her latest collection of handmade bracelets, earrings, rings and necklaces draws on her county surroundings even further, featuring delicate, tiny squirrels clutching oak leaves, owls in flight and others resting on perches.

Her previous designs have included kissing bunnies, dragonflies, swallows, dogs and even flamingos and are sold online, through a large number of stockists nationwide as well as in independent jewellers, fashion boutiques, craft galleries and several museum shops including the British Museum, the V&A and Henry Moore Foundation.

“I love making jewellery, I love getting an idea and the journey it goes on from being in my head, being created in my hands and finally being worn by my customers,” says Amanda (43), whose workshop is in Lincoln.

“I love looking at things, whether it is manmade or nature made, I love seeing the intricacies, working out how things work.”

Her passion for making things began when she was a small child, growing up on the Staunton Harold country estate, on the borders of Nottinghamshire, Derbyshire and Leicestershire.

It was there her creativity was sparked by her parents, who were both artistic, working as potters and painters.

“I always made things as a child,” recalls Amanda, “From the age of about thirteen I used to make ceramic animals – pigs, cows, hedgehogs – and put them in the pottery shop. Mum and Dad sold them, took a third commission and I got the rest!

“When I was a bit I older started making buttons from Fimo modelling clay and I’d go off into the shops selling them, then I did silk painting and I also made some velvet hats. I wanted to be a hat maker for a while.

“I was just making things more and more but it was 3D work rather than painting.”

After her A levels Amanda took an art foundation course and then went on to complete a metalwork degree at the University of Creative Arts, in Farnham, Surrey, before heading off to London where she studied for a masters at the Royal College of Arts.

“I just took to metals, I knew I didn’t want to do ceramics; you can control it a little easier than ceramics,” she explains.

“I did quite a broad degree course and started doing really massive forging and blacksmithing pieces of work but then they slowly got smaller and smaller.

“The jewellery I was doing was still quite large though and it wasn’t until completing my masters that I developed my own style a lot more.”

On finishing her studies Amanda immediately opened her own workshop with her then boyfriend, now husband, designer/maker Martin Drury, while working part-time as a civil servant to make ends meet.

“We decided to move up to Lincoln in 2003. It’s where Martin is from originally and he has a lot of family here. It’s a beautiful place and we thought we would give it a go – well that was thirteen years ago!” she smiles.

“It was only then that I became a full-time jeweller. I had various workshops around the city and then we bought a bigger house so that I could have a workshop at home.”

In the early days Amanda says many people thought her pieces, which feature a lot of cute, little animals, were for children, apart from in Japan where she developed a large customer base.

Her business took a back seat while she began her family but when she returned to work, she realised that trends had changed and people were open to wearing more figurative jewellery.

“The Japanese really like British designers and pieces made in the UK. They like the quality and the craftsmanship,” says Amanda.

“But after having my children, I found that styles had changed – people wanted more figurative pieces and I gradually built up my business here too. In fact I soon outgrew my workshop at home.”

Amanda uses precious metals including sterling silver and gold vermeil, specialising in a technique called photo etching, which is a way of putting images onto metal using chemicals which eat a fine design into them.

This she says enables her to create large batches in one go, although she still uses casting methods too and often combines the two together to create her fine, detailed work.

“I wanted the jewellery to be affordable, so my prices start from £20, which means everyone is able to have something.

“I like wildlife, little creatures and little animals and the characters that they have, I like the lines and patterns that you see in nature and I like to build a little story that’s going on.

“It’s like playing – but for grown-ups! I can build a little scene where things are going on with my work.”

As for the future Amanda is already working on her next collection, while reworking some of her previous pieces which are still very popular.

Following the success of her Dog Walking collection – which included tiny Scotties, poodles, pugs and sausage dogs – she hopes to create a similar line of pieces for cat lovers, and is also keen to incorporate some swans into her work.

“My inspiration really is everywhere – I like to go out for a walk in the woods, they are lovely around here; even the weeds and overgrown areas – as there are different shapes in different areas and I really like that,” says Amanda.

“I like looking at illustrations too, that’s where I get a lot of inspiration from, vintage botanicals, quirky things and not always necessarily nature – even dinner service decoration can be inspirational to me.

“The world is full of wonder, I hope my jewellery goes some way to expressing this.”

To find out more, or buy any of Amanda’s pieces visit her website www.amandacoleman.co.uk