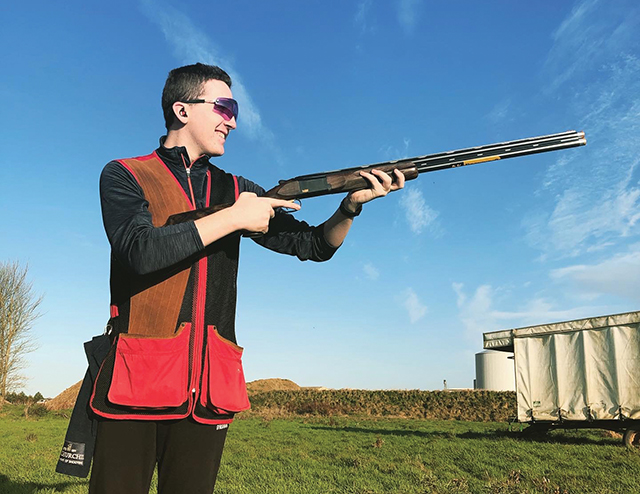 After six days of the CPSA World Sportrap Championships held at the E.J. Churchill Shooting Ground at High Wycombe in July, Kallum Burrell from Sibsey is still reeling from the shock of achieving an incredible score of 98ex100, which saw him win the title of World Sportrap Champion, beating five rivals by one shot and coming out on top from a field of 631 competitors.

Looking back on that memorable day, 18-year-old Kallum, who was first introduced to shooting at the age of seven when he went beating on the family game shoot, describes winning this prestigious title as well as claiming the junior title, as “absolutely unreal”.

“It was a complete shock to have won this year. I have always believed that one day I would win a world title, but always thought it wouldn’t be for at least another five to 10 years, so to have done it at such a young age makes it even better.

“To be honest I don’t remember much of the day, as it all turned into a bit of a blur. However, the two memories that stick out are very nearly missing an extra target late on that would have meant I wouldn’t have won the competition outright and would have had to go into a shoot-off, as well as traveling back to the ground when I had finished shooting and everyone sitting in silence in disbelief!”

Early years
Kallum, who grew up in Wrangle, near Boston, with his mother Kim, father Lee and sister Georgia, didn’t pick up a gun until he was 12, when his father took him clay shooting. He remembers first pulling the trigger of a shotgun at Christmas 2014 and taking part in his first competition in March 2019 at Grimsthorpe Estate Shooting Ground.

“My parents bought me a lesson with Mark Russell at Grimsthorpe Estate and that’s when he saw potential in me and became my first coach, sponsoring me for my first year.”

This talented schoolboy attended Giles Academy in Old Leake, but it wasn’t until he was in Year 11 that Kallum began attending local competitions and county championships, initially with mixed results and later enjoying his first taste of success when he reached sixth form.

“My teachers all showed great interest in how I was doing and after Giles’ sixth form closed, I transferred to Boston Grammar School, where the staff have been so understanding when I have had to have time off to attend a competition and always offer congratulations or encouraging words to help me perform better next time.”

Kallum, who describes the sport of trap shooting as “fun, different, sociable, variable and disciplined”, is currently coached by John Lee at East of England Shooting Ground, near Holbeach, whom the family originally approached for lessons and since April 2020 has been coaching him, although the pandemic has meant only being able to fit in having five lessons over the past year.

Getting involved
Kallum explains that the basics required for shooting include a gun, cartridges, hearing protection and eye protection.
“The best place to find information is through BASC (British Association for Shooting and Conservation) for game shooting and the CPSA (Clay Pigeon Shooting Association) for clay shooting. The majority of clay grounds hold a ‘have-a-go’ day every year, which is excellent if you want to have a try before you delve too deep.

“For anybody who is not aware of what happens in our sport, a common misconception is that you’re shooting live animals, rather than a clay disc that is thrown through the air by mechanical ‘traps’. There are 22 different disciplines, which mean that there are 22 different types of clay pigeon shooting.

“Before you start, you need to have a licence to legally possess a shotgun, and this requires you to have a fixed gun safe that the guns can be stored in while not in use.

“I have two Brownings, one of which is a 725 ProSport, which is my main gun that I use for competitions. My other gun is a 525 that is my spare in case the other was to have a temporary fault and needed to be sent away for repairs, as well as using it for any game shooting.

“I believe anyone can have a go and learn the basics of shooting and then build on them as time goes on, together with finding the right coach who can teach you not only the foundations, but also help build up your competitive edge, as well as the psychological side.

“However, it’s definitely a sport which if you wanted to do it competitively, requires a lot of financial support, and I realise I am extremely lucky to be in a position where I can continue to shoot on a regular basis.”

Dedicated sportsman
Kallum, who is a long-time member of the National Federation of Young Farmers’ Clubs (YFC) and currently vice-chairman of the North Holland branch in Leverton, is no stranger to shooting, although it was only in March 2019 that he took part in his first competition, which took place at Grimsthorpe Estate Shooting Ground.

As a dedicated sportsman, he continues to work hard on maintaining his fitness and health: “I particularly enjoy playing football and will be playing for the school team over the next year. I also go to the gym three or four times a week and try to generally eat healthy. However, sometimes this doesn’t quite go to plan!

“To keep my eye in, I also ensure I stay well hydrated, especially over the summer as dehydration can have an adverse effect on your eyesight.

“YFC has helped me develop my social confidence, as I have had to speak and interact with new people, many of whom are older than me. It has also helped to develop my competitiveness as we hold many county and national competitions each year.”

Kallum also pays tribute to his family who he says have all been “incredibly supportive and have travelled up and down the country to take me to competitions”.

“I don’t think anything can be achieved without making sacrifices. I have had to reduce my time playing football as most matches and shooting competitions clash as both take place on a Sunday, and I’ve had to miss many family birthdays and other special events as I have been away at competitions.”

Kallum worked at Staples Vegetables over this summer before returning to Boston Grammar School in the autumn for his second year of A levels, with the aim of trying for a place at Loughborough University.

“Funding isn’t easy and extremely hard to come by as shooting is often seen as not very ‘politically correct’ due to the use of firearms, so finding businesses out of the shooting sector to help, or even provide products, is extremely difficult.

“My main ambition and challenge for next year is to go to San Antonio, Texas, to try and defend my title, as well as possibly looking at swapping my disciplines to try and shoot at an Olympic Games in the future.”

Kallum believes that the reason for his success at such an early age is “a combination of taking the right opportunities, as well as having two excellent coaches”.

“Persistence is probably the most important part of this sport, as it is so common to have ups and downs. When you have a down, it’s important to continue pushing through, come out the other side and keep performing at the sport that we all love.”