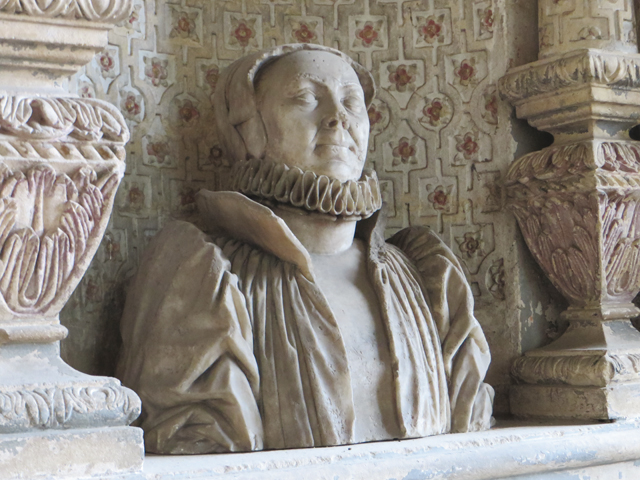 Katherine Willoughby is today little known beyond the confines of history books, but was one of the most remarkable – and interesting – women of the Tudor period.
Married in 1533 to Charles Brandon, Duke of Suffolk, Henry VIII’s closest friend, when she was just fourteen and he nearly fifty, she was later romantically linked with both Henry and the King of Poland before wedding her gentleman-usher Richard Bertie.

A staunch Protestant, she avoided involvement in the conspiracy built around Lady Jane Grey, her step-granddaughter, but was obliged to spend four difficult years in European exile while the Catholic Queen Mary ruled England. Hers was a life of privilege, but she was no stranger to tragedy and trouble.

Katherine’s father, William, Lord Willoughby de Eresby, held land in Lincolnshire, but she was born at Parham and spent the first years of her life in Suffolk. She was his only surviving child, and when he died in 1526 Charles Brandon and his third wife Mary Tudor, Henry VIII’s sister, became her guardians. It was thought that Brandon intended to marry her to his son, the Earl of Lincoln, but after Mary’s death he wed her himself. Young Lincoln was said to have died of grief when his father stole his intended, but commentators may have been wise after the event.

Lord Willoughby had married Katherine’s mother, Maria de Salinas, a Spanish lady-in-waiting to Queen Katherine of Aragon, in 1516, and one of the gifts they received from King Henry was the reversion (the right of future possession) of the manor of Grimsthorpe in Lincolnshire. Brandon’s main landed interests lay outside the county, but in the aftermath of the uprising called the ‘Pilgrimage of Grace’ the King ordered him to reside permanently in Lincolnshire to deter further disturbances. He was given Tattershall Castle to enhance his local authority, but Grimsthorpe became his (and Katherine’s) principal home.

The Brandons were frequently at court, and Henry VIII undoubtedly found Katherine attractive. In 1538, only months after Queen Jane Seymour’s death, it was reported that he had been ‘masking and visiting’ with her, and after Charles Brandon died in 1545 there were rumours that he intended to make her his seventh consort. Katherine was young and vivacious and might still have given him the second son he so desperately wanted, but if Henry had seriously contemplated another marriage he apparently changed his mind at the last moment. Katherine was spared an offer she could hardly have refused.

King Henry’s death in 1547 and the accession of the young, Protestant, Edward VI seemed to herald a new dawn for the reform-minded Katherine, but the 1550s became a decade of disasters. Her two sons by Brandon succumbed to the sweating sickness on the same day in July 1551, and tuberculosis claimed the boy-king two years later. By this time she had married Richard Bertie, and it was perhaps fortunate that the expected birth of their daughter Susan kept them away from London during Lady Jane Grey’s brief ‘reign’. Nevertheless, it was soon apparent that Queen Mary intended to bring pressure to bear upon them, and they decided to seek safety in flight.

Much of what we know of Katherine and Richard Bertie’s enforced travels in Europe comes from the not entirely reliable pen of the martyrologist John Foxe. Foxe describes a long walk through the February snows to reach the relative safety of Wesel in Protestant Cleves, and then a dash up the Rhine to Weinheim in the Palatinate where they were allowed to settle in Windeck Castle. Throughout, they were pursued by Queen Mary’s agents, but help arrived in the person of one John a Lasco who had known Katherine in England and had contacts with the King of Poland.

The King, Sigismund II, is said to have sought Katherine’s hand in marriage in the late 1540s after his advances to the then Princess Mary were rejected, and a Lasco persuaded him to offer the fugitives refuge in his territory. Foxe does not describe what must have been a journey in excess of 1,000 miles, one that would have taxed all their resources, but finally they reached Poland where they remained until Queen Mary died.

The Berties returned to England and to what they hoped would be a Protestant Utopia when Queen Elizabeth succeeded, but again their hopes were disappointed. The new Queen wanted a Church that was inclusive rather than strictly Puritan, and Katherine’s troubles increased when, at the end of the 1470s, her wayward son Peregrine (who had been born during her exile and was named for her travels, or peregrinations), wanted to marry the Earl of Oxford’s sister Mary.

The Berties did not ‘get on’ with the Earl and his family, and Mary showed the Queen letters Katherine had written, possibly years earlier, which appeared to criticise the royal approach to religious matters. Katherine feared at one point that she was about to be arrested and perhaps executed, but the courtiers Robert Dudley and William Cecil smoothed matters over. Peregrine married Mary and won renown as a soldier in later years.

What kind of person was Katherine Willoughby? Her surviving portraits reveal an attractive woman with well-defined features, capable, but given to speaking her mind and to periodic outbursts of temper. Richard Morrison, the English ambassador to the Court of the Emperor Charles V, remarked on her ‘heats’, regretting that ‘so goodly a wit waiteth on so froward a will’, and on another occasion she had to apologise to William Cecil for her ‘foolish choler’ and ‘brawling’, begging his ‘forgiveness on my knees’. Bishop Hugh Latimer said pointedly that some women ‘should keep their tongues in better order’ in one of the sermons he preached before her at Grimsthorpe, but her feistiness was part of her character. Without it, she would not have been the woman she was.

Katherine spent much of the latter part of her life at Grimsthorpe, from where she intensified her efforts to promote the Protestant religion in the county. The clergyman-historian John Strype (1643–1737) noted that the reformed faith was greatly advanced ‘by the helping forwardness of that devout woman of God, the duchess of Suffolk’, and added that:

‘She was very active in seconding the efforts of government to abolish superfluous Holy Days, to remove images and relics from the churches, to destroy shrines and other monuments of idolatry and superstition, to put an end to pilgrimages, to reform the clergy, to see that every church had provided, in some convenient place, a copy of the large Bible…in inculcating upon all the reading of the Scriptures, and especially the young, the Pater Noster, the Articles of Faith, and the Ten Commandments in English’.

After her husband’s death in 1545 she advanced Protestant clergymen to her clerical livings in the county, and six years later founded a grammar school on chantry land she had acquired at Spilsby – on the understanding that the (Protestant) schoolmaster would be chosen by herself and her heirs.

There are still a few reminders of Katherine in Lincolnshire. Some of Charles Brandon’s rebuilding work survives in the south range at Grimsthorpe, and the view from the battlements of Tattershall Castle looking eastwards is still much as she would have seen it. There is much of interest in her correspondence with William Cecil and in the surviving accounts of the Grimsthorpe household; but her finest memorial is her tomb in St James’s Church at Spilsby. Here she lies beside her ancestors in sepulchres that have mercifully avoided the attentions of the iconoclasts, a woman whose life spanned – and epitomised – much of the Tudor Age.

* David Baldwin’s books include Richard III and Elizabeth Woodville: Mother of the Princes in the Tower. His biography of Katherine Willoughby, Henry VIII’s Last Love, was published by Amberley in March.