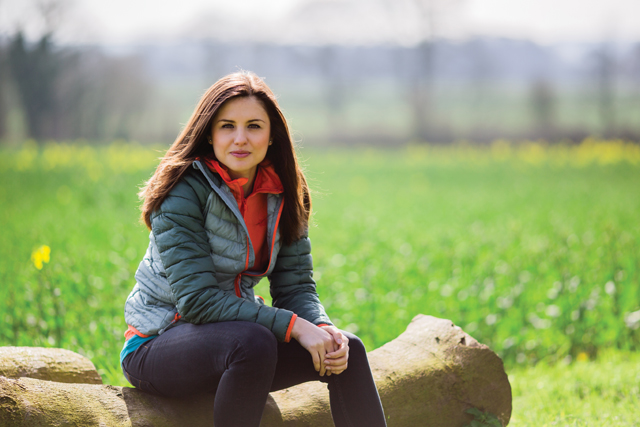 Come rain or shine she’s been entertaining Lincolnshire and Humberside viewers with her weather reports for almost a decade, and now the future’s looking bright for Keeley Donovan, who is part of the team fronting a new BBC show.
Keeley, who grew up in Tetney, is one of four presenters hosting the new Countryfile spin off Countryfile Diaries, which aims to reflect country life through the changing seasons.

The spring edition, which aired in May to coincide with Countryfile’s seasonal special, showed viewers how the season affects the landscape, wildlife and the people who live and work in the countryside.

And Keeley (32) joined regular Countryfile presenters John Craven and Jules Hudson and Paul Martin, of Flog It fame, to offer viewers a deeper look into country life through the changing of the seasons.

“The program has the look and feel of Countryfile, but is a bit more focussed on the seasons,” explains Keeley, who has long been a fan of the original show.

“I love Countryfile – it’s very much a Sunday evening tradition to sit down and watch it, still full from your roast dinner, whether you’re from the country, the town, or the city.

“Being part of the sister programme is a great honour for me. Most of my sections have been science related to the weather and climate, which go hand in hand with the seasons and have been especially interesting since the winter we’ve just experienced was record breakingly warm, and for some parts of the country really wet. We had examples of spring species around in December.”

Keeley, who has worked for the BBC since 2005, developed her passion for broadcasting when she was a teenager. She was just fourteen when she started presenting shows in front of a live audience for a cable TV station in Immingham.

“Looking back in my school yearbook from when I was sixteen, it says, ‘What do you want to be doing in ten years’ time?’ and mine says broadcasting – I knew very early on that I wanted to be a presenter on television,” she recalls.

“I started out presenting for a company called Channel 7 after interviewing through a local theatre group – it was live and quite exciting and I just really enjoyed it.

“I was a bit of an extrovert as a child and enjoyed performing to an audience. We also got to help put the programme together and the whole process was very appealing to me.”

After finishing her studies at The Humbertson School, Keeley went on to study media at college and university, while continuing to present on a freelance basis. After graduating from Leicester De Monfort she returned to Grimsby and completed a postgraduate course in journalism. From there she landed a role at the BBC, where her first job was covering the 2005 election in Hull as a video journalist.

Shortly after, a position came up with the Yorkshire weather team, and although she wasn’t qualified she applied, as on-the-job training was promised.

“I wasn’t entirely sure what area I wanted to go into, but then a job came up in weather. I’d always been good at science, asking questions and being inquisitive about it, so it was perfect as it allowed me to present and I also went and studied with the Open University and was trained in meteorology, so I was able to create a specialism,” explains Keeley.

“I started off broadcasting with a run of really cold, snowy winters. Up until then we’d had a lot of mild, boring winters, so to come into it then was really interesting.”

Keeley, who now lives in Yorkshire, has been one of the region’s main weather presenters for BBC Yorkshire, East Yorkshire and Lincolnshire for almost a decade.

In addition she hosts news bulletins, along with regularly reporting for the region’s current affairs program Inside Out. She’s also done some radio work and last year landed her first national presenting role on the BBC’s Break-in Britain – a fifteen-part series helping traumatised homeowners recover from burglaries.

“I love the variety of my work – Inside Out, which is current affairs is great as it’s anything from learning to be a lifeguard, to something more serious such as covering Rhino extinction.

“I’ve also done some radio work, as the weather broadcasts go into eight different stations, and I’ve done some maternity cover on Radio Humberside too.

“Radio is a very different skill, as you have to be able to talk, sometimes for up to three hours. If I did that all the time, I’d be exhausted,” she laughs.

Passionate about the great outdoors, Countryfile Diaries is the perfect fit for Keeley who has recently learnt to snowboard, and loves exploring the British countryside.

“I do like the outdoors – we love getting outside for woodland walks, particularly in the Dales and Cornwall for coastal walks and Lincolnshire has got lots of lovely walks too.

“I recently did part of the Viking way around Tealby which was lovely. My other half is a keen photographer so he likes to get out and about for different reasons,” she adds.

“Countryfile Diaries fits in perfectly with my weather presenting on Look North and it’s nice to have some variety, as well as being able to do something so important for a big audience.

“We filmed all over the country down in Hampshire, Oxford, and Cambridgeshire and a lot of the series was shot in the New Forest, which was great as I’d never really been down there before, so it was all new to me.

“There have been some great experiences – getting to know some smaller creatures like great tits and wood mice and I’ve also enjoyed my first dawn chorus.

“Through Countryfile Diaries I’ve had the great outdoors as my office for a few weeks and it’s been wonderful – even though it’s been really cold!”