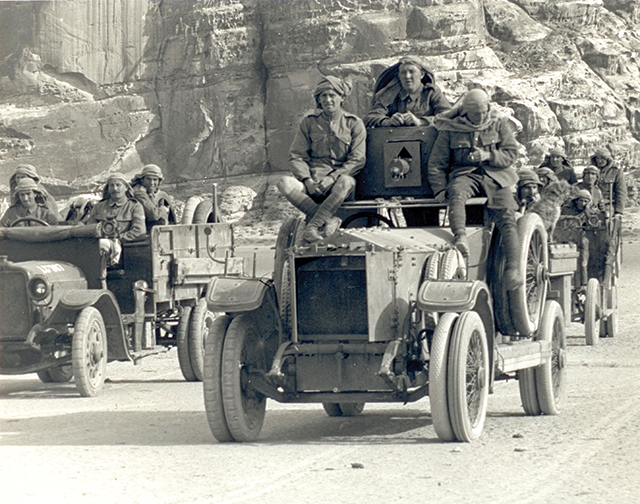 Lawrence of Arabia… and Lincolnshire

A war hero re-emerges from the desert sands.
Lincolnshire is a long way from the Middle East, but an unlikely character once biked along its country lanes hoping to escape the notoriety of an extraordinary past.

TE Lawrence – or Lawrence of Arabia – is one of the twentieth century’s most iconic figures and now his incredible story is being revisited in a UK first exhibition hosted by the National Civil War Centre in Newark. What emerges according to one expert is the rehabilitation of a war hero.

Lawrence was a low-ranking British military intelligence officer who played a key role in the Great Arab Revolt (1916-18) against the Turkish Ottoman Empire before being discovered by an American reporter and famously photographed in Arab robes.

News of his dashing exploits was flashed across the world and he was feted by royalty and eventually immortalised in David Lean’s classic 1962 film.

But the mental scars of his wartime experiences tortured him for the rest of his life. He assumed a new name and lived as far as possible from the spotlight. In 1925 he was posted to RAF Cranwell in Lincolnshire and explored the county on his beloved Brough motorbike – specially made for him and capable of topping 100 miles per hour.

Lodging in Lincoln, he rode into Newark every week to play snooker and also worked on Seven Pillars of Wisdom, his book on the desert revolt.

Since his untimely death in 1935 historians have struggled to separate the man from the myth. Some critics have even described him as a fantasist and charlatan.

But the new exhibition bolsters his reputation, based on the findings of archaeologists who have toiled in the Jordanian desert for ten years, following in Lawrence’s footsteps. Neil Faulkner, from the Great Arab Revolt Project (GARP), explained: “We found field evidence to support Lawrence’s claims wherever we looked. For three years we searched to locate one of the desert camps he used before launching attacks on the Hijaz railway line. There we found spent cartridges and rum bottles discarded by British troops. We also excavated the site of the deadly attack on a Turkish supply train, featured in David Lean’s film. The investigation confirmed Lawrence’s account in every detail and we even found a bullet likely to have been fired by Lawrence’s Colt revolver.”

The spent bullet is one of the artefacts being displayed for the first time, together with the recreation of a Bedouin camp, the saddle-bag used by Lawrence to carry gold to pay Arab chiefs and a section of blown-up railway line. There’s also a Brough motorbike on show.

Neil Faulkner continued: “Lawrence was a brilliant military commander. Without his help it’s unlikely the Arab army would have achieved the success it did in defeating the Ottoman Empire.”

The exhibition also includes a copy of a map Lawrence helped to draw up for the British Government on how the region should be reshaped.

“He was a pro-Arab nationalist and wanted to see a very different future to that carved out by the British and French, which took little note of tribal boundaries and sentiment. The results of that can still be seen today.”

Michael Constantine, manager of the National Civil War Centre, added: “We’re thrilled to work with the GARP team to host this fascinating show. Although we primarily tell the story of the seventeenth-century clash between king and parliament, we also step outside our time period to stage world class exhibitions. Previously we have hosted Magnum Agency photographs of civil wars in the twentieth century in places like Yemen, Somalia and Syria, which links to the aftermath of the Great Arab Revolt. Of course the story of Lawrence is also truly spell-binding.”

The show runs until 31st March 2017 and is open daily 10am to 4pm. Entry is free with normal admission to the National Civil War Centre: £8 adults, £7 concessions and £3.50 children. A season ticket is just £16 and English Heritage members go half price.