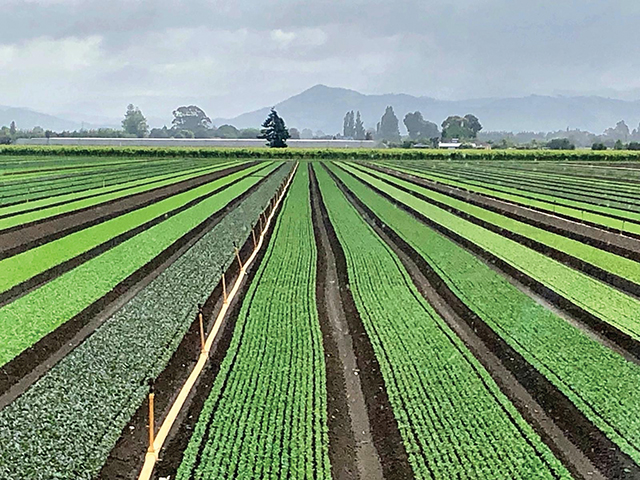 Two Lincolnshire farmers were among those who won a place on a once in a lifetime trip to New Zealand. They tell Kate Chapman about the ways in which farmers over there are pushing their crop yields.
Both Simon Lord, from Hough-on-the-Hill, near Grantham, and Tim Beaver, who farms at Duddington, near Stamford, were part of a fifteen-strong cohort, which recently spent two weeks visiting growers and leading agribusinesses as part of the BASF Innovation Tour 2018.

They toured a variety of enterprises on both the North and South Islands, including the former and current world record holders for wheat yields, and visited Crops 2018, hosted by the Foundation for Arable Research (FAR) as well as getting an insight into a new fungicide, which is due to be rolled out commercially.

Although on the other side of the world, the land and climate in New Zealand are not too dissimilar to the UK but farming over there operates without subsidies, which many of the farmers were keen to find out more about.

During the trip also they discussed topics including vertical integration in businesses, sustainable farming, and meeting the demands of external markets and some are now working with the German chemical company to develop crop trials in a bid to push on their own yields.

The farmers, who came from all over the country including Lincolnshire, Yorkshire, Somerset and Wales, won the trip after scanning cans of BASF’s cereal fungicides Adexar and Librax, which is used to control Septoria and other foliar diseases on wheat, last spring.

Tim, who farms 500 hectares of wheat for Weetabix, malting barley, oilseed rape and sugar beet, is also on the NFU Sugar and Red Tractor boards.

He said: “The New Zealand farmers have a sharp attention to detail; they are all very focussed on producing for a specific market and won’t put crops into the ground unless they know they can make a decent return.

“We learnt how their dairy and arable sectors have become very dependent on each other as the demand for dairy really hots up in China, creating increased demand for hard livestock feed.”

Father of two Tim, who studied agriculture at Newcastle University before travelling and then returning to his tenanted farm, added that he was also interested in how the New Zealanders are targeting affluent overseas markets, which are willing to pay for high quality goods.

“There’s a firm focus on meeting the high-quality standards set by these markets and farmers are taking advantage of the premium available,” he added.

“For example, they have developed a new type of kiwi which is sweeter for the tastes of the Japanese and Chinese markets. Their marketing is fantastic and we here in the UK could learn from them on this.”

Simon farms 800ha of arable land and keeps 900 breeding ewes. He went to America for a year to work before returning to his family farm and manages the third generation business in partnership with his brother.

He was particularly interested in the high yielding arable enterprises the group visited in the Southern Pacific and also keen to learn more about farming methods without subsidies.

“Growers in New Zealand are just so lucky with the soil and the climate; the winters are mild and they have the day length to provide a long grain filling period. They can do absolutely anything,” said Simon, a keen golfer and shooter, who is passionate about the countryside and looking after the environment and soils for the next generation.

“New Zealand growers want to keep their crop in the ground for as long as possible, with one commenting, ‘with a good wheat crop we will try and have a birthday out of it’.

“Here in the UK we are facing different challenges to those in New Zealand and we just have to try and do what we do, better.

“This season I plan to try and keep a field of wheat as green as possible until the end of August, rather than the start, to get a longer grain fill and just generally play around with inputs to see what we can do.”

During the trip the farmers were also given sight of Revysol, a new cereal fungicide which BASF hopes to launch later this year, both in the UK and New Zealand.

“We saw it in the field and it looks like a game-changer in the fungicide market,” said Tim, while Simon added, “There were in-field trials where we thought one plot had been sprayed off and one hadn’t. However, it turned out that the plot that was still green had been treated with Revysol and the other hadn’t. It was quite staggering, the differences between the treatments. It will be good to get it over here and get using it.”

The farmers who won places on the tour were accompanied by Robin Rose, BASF agronomy manager for Wales and the west of England.

“The engagement we got from the British farmers who came on the trip was incredible – many of them have come back invigorated and said they wanted to push yields on their own farms,” he said.

“So, we are setting up meetings with many of them and their agronomists to look at how we can work together.

“For us, it’s fantastic – like this we can get closer to farmers and find out what their day-to-day challenges are, and what their own specific limitations on yield are.”