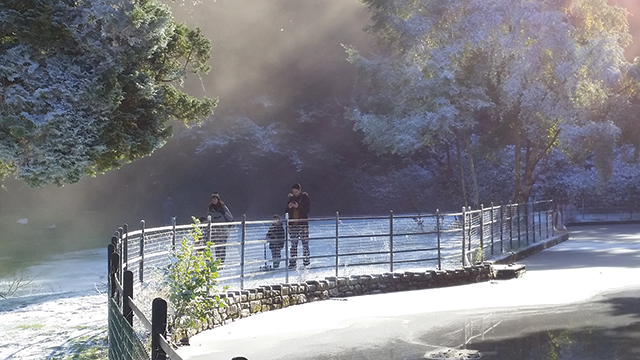 The ability to change the weather is one many of us can only wish we possessed but, as Kate Chapman discovers, for special effects creator Harry Stokes, having the elements under his control is an everyday occurrence.
Harry Stokes has filled theatres with snow, created storm surges, summoned up force nine gales and even blown up a few trucks through his work providing atmospheric and special effects for film, television and theatre as well as corporate clients and commercials.

His company Snowboy Systems has provided wind, snow, rain and more for many of the nation’s favourite shows including Band of Brothers, Downton Abbey, Emmerdale and The Gadget Show, while on the big screen his work has featured in Bridget Jones’s Diary, Dean Spanley and Beyond Rangoon.

As well as summoning up the elements on set, Snowboy Systems also manufactures a variety of machines capable of recreating them at its base near Stamford, for which it is renowned worldwide.

“Our workload is split pretty evenly, as we design, build and sell a lot of our own machines all over the world, while closer to home we do film and television work, mainly in this country and western Europe,” explains Harry.

“I go out on location quite a bit and really enjoy that side of the job – no two days are ever the same.

“Our work is very creative; it’s also very short-lived filming effects for television, which is in contrast to the manufacturing side of the industry, designing reliable machines that work for years.

“But it’s great; you never know what you’re going to be asked to come up with next.”

Snowboy Systems, previously known as Enterprises Unlimited, was founded in 1984 by Harry’s late father Phillip, who was an experienced special effects supervisor and entrepreneur in London.

Harry was planning to go off and study at university but ended up following in his father’s footsteps when he was invited to join the company in 1994, which by that time had moved to Lincolnshire.

“I remember my father saying ‘why don’t you come and work on this with me?’, it was just going to be for a year, as he’d just got a film – Beyond Rangoon – so I agreed, but then I ended up staying,” he recalls.

“Growing up, I’d always been following him about in the workshops and I just learnt on the job. I really enjoy it – especially when we’re asked to blow up cars, which is great fun!

“My father did a lot of film work, which is what brought his attention to the lack of a decent snow machine; and in his own time he worked on many projects, including inventing and designing the original Snowboy snow machine.

“I’ve carried on designing, ever improving and changing, to develop a range of machines that can make snow for every occasion.

“Over the years we’ve provided the snow for many Christmas adverts, the most recent one we did was for Waitrose last year. It featured a pub being snowed in, and everyone had to have a makeshift dinner. We provided the blizzards and snowdrifts.

“It was all done on location up in North Yorkshire, logistically there was an awful lot to do, moving over ten tons of equipment and materials from one location to another. It also had to be cleaned up afterwards.

“We use a water based foam snow in the air, and for the ground snow it was paper with a little bit of salt that created a deep white blanket of snow.”

Harry’s core creative team is quite small – with just five members, including his wife Vix Meddings Stokes, whose family also has a links to the special effects world. Her uncle Derek Meddings won an Oscar for his work making Superman fly and was also involved in the popular Thunderbirds puppet show.

The couple, who live in Bourne and met on the set of Band of Brothers, also have a large bank of freelancers to call upon for bigger jobs. As well as providing snow, Snowboy Systems also provides rain, wind, fire, smoke, pyrotechnics, bubbles and confetti cannons for shoots and events.

“In this business we tend to find people want different things every time; but we have a very large range of equipment that we can call upon and adapt for each job, the challenge is finding the right piece of equipment that will be best suited to do it,” explains Harry.

“We have compressed air water cannons, which we use to create breaking waves for stormy sea effects, and those same cannons we adapted by putting a sleeve in, so we could launch a football from them, to create the world’s fastest goal for The Gadget Show.

“One studio in London wanted us to recreate the water drop effect used in the 1980s film Flashdance, where the dancer pulls the chain and releases the water, for a photo shoot.

“Then we were asked to reproduce it for the touring show, which meant we needed a machine that would reliably create the same effect night after night, so we had to redesign what was a very simple mechanism to release ten litres of water, time and time again via electronics and compressed air.”

During the company’s thirty-year history Harry and his team have covered Harrods in snow for its pre-Christmas launch – in the middle of August – blown up a car in Clipsham quarry for Fifth Gear, built a mechanical rig to create the effect of a Ford Explorer flying off a bridge into water while last December his equipment was used to turn London’s Old Vic Theatre into a Dickensian winter wonderland for its production of A Christmas Carol.

When we spoke, Harry had just sent six of his Snowboy snow machines Down Under for use by Opera Australia, in Sydney, and was preparing for more work with The Gadget Show, creating extremely adverse weather conditions.

“There’s such a variety of requests and the challenge is to make it work,” adds Harry.

“The industry is changing all the time – lots of projects we’re involved in now, where there are landscapes requiring atmospheric effects are created by CGI, so we find ourselves working in studios with green screen technology.

“It is nice to be out on location, but certainly if the weather is like it is at the moment it’s nice to be indoors. No two jobs are ever the same, there’s always this desire to create something bigger and better than last time, and we’re always keen to rise to the challenge.” 

To find out more about Snowboy Systems and its work visit www.snowboy.co.uk