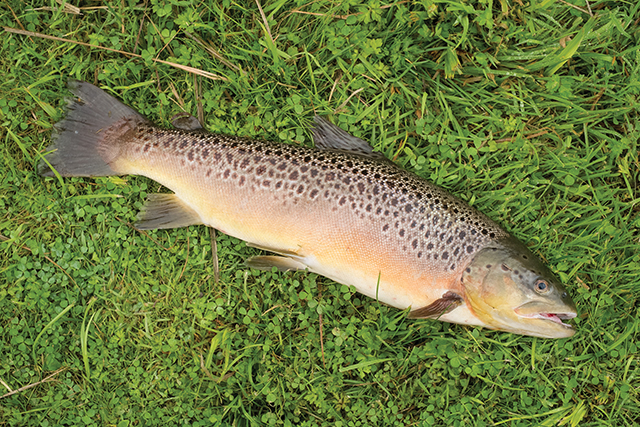 Now the trout fishing season is over for most of us, other than the ardent fly fisher who fishes on through the winter, the colder months are the time to start fly tying, says Barry Grantham.

Yes trout flies are cheap to buy but by tying your own you get the satisfaction and pleasure of catching a fish on a fly you have tied yourself, or even maybe designed yourself. You also can avoid the disappointment of a fly you have purchased from a shop falling apart while being used, or the hook straightening out on a good fish. By tying your own flies you can choose the materials with which to tie the fly.

TOOLS AND BASIC ACCESSORIES
The most essential tool is the vice, this is clamped or sits on a bench or table top in front of you. This tool has tapered jaws that grasp the hook firmly so materials can be added to it. This item for the novice is essential and it pays to get the best you can afford. You can purchase suitable vices like the AA for a few pounds or spend several hundred pounds on a precision built one. A very good friend of mine, the late Donald Downs, a master fly tier, used to tie flies in a small vice held in his left hand or sometimes just held the hook with finger and thumb whilst he tied amazing patterns.

You will also need good scissors; whilst you may manage with one pair to start with, you will be better off with two pairs or better still three. One strong pair with straight edges for cutting wire and tinsel. One smaller pair with sharp pointed edges for cutting feather silk thread and fur. A third pair with curved edges is very useful for trimming the tying silk close to the body of the fly to avoid stumps of thread. Whatever the pair, they must be kept sharp.

The next item is a bobbin holder. This is used to hold the bobbin of silk that is used to wrap around the hook and tie various materials to it.

We next need some hackle pliers. These are used to grip a feather that is tied to the hook and then wound round making the fibres stand out to imitate legs and wings. These are usually made from brass but a good style of hackle plier is to use one of the miniature circuit probes. These are excellent for large and small hackles.

A dubbing needle: This is used for pricking out fur on fly bodies, for applying varnish to the head of a fly and cleaning out the eye of the hook if varnish has sealed up the eye. A dubbing needle can be easily made by inserting a darning or other needle in a round piece of dowel about 8mm diameter by 60mm long.

A whip finish tool: This is a tool used to tie in the thread after you have finished the fly. Easy to use but personally I prefer to do the whip finish using my fingers.

So let’s tie a couple of flies that will catch fish and are easy to tie. As a licensed game angling instructor, when giving someone fly tying lessons I always start with these proven patterns: Midge Pupa and Emerger.

THE MIDGE PUPA, COMMONLY KNOWN AS A BUZZER (BLACK)
1. A size 12 hook is placed in the vice. You can purchase a hook called a grub hook that is the curved shape of a pupa but normal hooks can be used.

2. Starting at the eye of the hook, black thread is wound on trapping the loose end. Several turns are made to secure the thread.

4. Grasping all the materials that have been tied in between finger and thumb of the left hand and holding materials to the hook you carefully, in close turns of the thread, wind down the hook neatly, binding the material to the hook shank. This process is carried on until you get half way round the bend of the hook.

5. The thread is now wound neatly back towards the eye of the hook, to about two-thirds along the hook. This is followed by winding the black floss or wool in neat touching turns to the same point as the thread. Two or three turns of thread are wound over to secure in position. Using the curved scissors, the loose end of the floss or wool is trimmed close to the hook. The silver wire is then wound in a neat spiral turn to the same point and trimmed off using the strong scissors. The wire is wound the opposite way round the hook to the floss or wool – this makes the wire stand out and form a segmented effect on the pupa. If it was wound in the same direction it would sink into the floss or wool and not give the segmented effect.

6. A strand of peacock herl is now tied in at the point we finished the body. This is now wound forward to the hook eye going over the white wool. The peacock is tied in with two or three turns and using the whip finish tool or your fingers, four turns are made to secure. The thread is now cut off close to the herl. A small drop of varnish (I use Hard as Nails nail varnish) is put on using the dubbing needle.

7. The white wool is now trimmed to just cover the hook eye and to just protrude past the bend of the hook.

EMERGER
The emerger is tied exactly the same up to the point of tying in the peacock on the pupa.

The white wool facing forward is trimmed off. The peacock is tied in and wound forward to the eye half the distance as we did on the pupa. A grizzle hackle is now tied in by the stalk and the excess is trimmed off. The tip of the hackle is held in the hackle pliers and three or four turns are made. This makes the fibres stand out. Three or four turns of thread are wrapped over the hackle to hold it in place. The waste end of the hackle is now trimmed. I find that forming a V with the scissor blades and pushing the thread, rather than snipping, is best for this step. You avoid cutting the main thread on the bobbin by accident. A neat head is now formed with the thread, whip finished and the thread trimmed and varnish added with the dubbing needle.