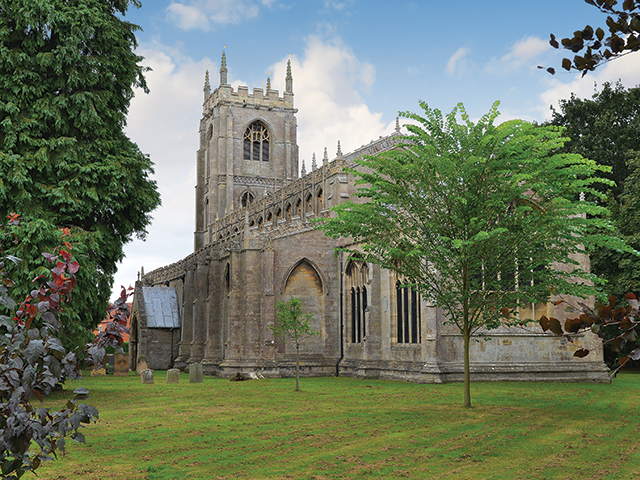 Life in Kirton and Swineshead

The small Lincolnshire villages already have much to be proud of, with a diverse range of facilities and activities on offer to the community. But the location is also proving popular with people from outside the area.
With a new skate park and playground for the youngsters, exciting new plans for its former Tudor Inn, and a famed brass band which attracts players from up to thirty miles away, Kirton certainly is a pleasant surprise.

Parish Council Chairman, Ian Turner said: “Two years ago we opened our skate park. We managed to raise £35,000 for that and it is a very well used skate park. It also has children’s play equipment and multi-playing surfaces for cricket and football and the like.”

New information boards have been erected in the village containing information on the history of Kirton and famous people who lived there.

“The old King’s Head pub has been taken over by Heritage Lincolnshire and that is superb news for the village,” said Ian.

“Because of the devolution bid the parish council has been asked to take over some services and we have managed to reduce the costs of them by more than fifty per cent.

“Grass cutting cost £7,500 but we sent it out to one of the local companies and got it down to just over £2,500. We are also going to put more energy saving lights in, which will ultimately cost more but only at first. We are quite pleased with that.”

One concern in the village is the housing developments that are taking place.

“The new South Lincolnshire plan says we would have at least 500 new houses built but they haven’t taken into consideration the ones that have already been built,” said Ian.

“The overall infrastructure of the village is a concern. We only have two doctors, there isn’t a dentist and the primary school is full to capacity.

“One of the positives is that we have an industrial area which was purchased with Euro money off Wash Road on the A16 and more than fifty per cent of the industrial park off now has firm offers/sales or is under construction. The remaining fifty per cent is also in the early stages of negotiations with other firms keen to take on a plot.”

The village has enjoyed a number of big events this year and all have been well supported by the community.

“There was a very large Queen’s Birthday event which was incredibly well supported,” said Ian.

“The Royal British Legion held a sunset-to-dawn commemoration at the war memorial which was a very good event. I have never seen so many people turn out. They lined the streets from the town hall to the church and the church had to put more seats out.

“The lighting of the village Christmas lights organised by the parish council is also a big event and very traditional.”

The village has also acquired new land for the extension of the cemetery which will last fifty to seventy years.

Kirton even has its own brass band which attracts players from all around. Kirton Brass Band meets every Thursday night at the Methodist Church in London Road. It was founded in 1870 and has remained in existence throughout, with the band enjoying notable contest successes in the past but, for some time it has concentrated on concert performances in the Lincolnshire area.

Band chairman Dave Redding said: “We have been around for a long time and will be marking our 150th anniversary in two years’ time.

“For the 140th anniversary we had a brass band march Kirton 140, written by Professor Philip Wilbey who is associated with the Black Dyke Band, one of the most famous bands in the world. They invited us to play with them at their concert that particular year and we played Kirton 140 together. We even featured on one of their records playing it.

“They invited us back every year and it is quite an honour.”

Over the years, the band has had many different players. It has recently appointed a new musical director, Tony Garrell.

“The band is doing very well under his directorship. A couple of weeks ago he had a learn and play session where he invited youngsters and their parents to come in and have a go. We had several new people, not only children, come along and there were three generations of one family who attended,” said Dave.

The band is now looking for two cornet players as the existing ones have moved on.

“They are at university now, so we are looking for replacements,” said Dave.

The band plays at garden fetes throughout the year, at the village Christmas carol concert and holds a Last Night of the Proms event at Kirton Town Hall, coming up in October.

The band was founded by Henry Woodward who, with his nephews and some other local lads, had been playing together on some old brass instruments in the garden shed at Henry’s home in Station Road, Kirton.

Henry suggested they should form a band. With no electricity at this time, there was plenty of demand for band music, particularly at fetes and similar occasions.

After Henry’s death the band moved to a small building near the church, until 1962 when a purpose-built band room was constructed behind the Stag & Pheasant.

Some of the notable engagements during the band’s long service to Kirton have included playing the national anthem at the top of the church tower on the occasion of Queen Victoria’s diamond jubilee, and staging a light parade for King George V’s silver jubilee.

Between 1960 and 1970 the band contested under Jack Mather. It gained a first place at the area contest in Leicester and also in the City of Oxford contest.

The band reached the finals in London twice and in addition gained prizes at Cleethorpes and Nottingham.

KING’S HEAD
A Tudor inn dating back to 1599 has been rescued from being “at risk” and given a new lease of life thanks to a Heritage Enterprise grant and an entrepreneurial local charity.

The Old King’s Head in Kirton is a Grade II listed building and is considered to be a significant sixteenth-century inn with a rich history and many stories to tell.

Currently standing vacant and in urgent need of repairs, a Heritage Lottery Fund (HLF) grant of more than £2 million will allow the building to be restored, brought back into use and provide jobs, training opportunities and a boost to local tourism.

Heritage Lincolnshire, a charity with an excellent track record in saving historic buildings for new uses, has received HLF support to secure the future of the building. It has now been purchased by the charity which aims to see it repaired, refurbished and revived as an artisan café and boutique bed and breakfast.

Heritage Lincolnshire chief executive Liz Bates said they we’re delighted that the Heritage Lottery Fund has supported this project. “The Old King’s Head is a very important building that fell into disrepair and is now at risk from dereliction.

“We look forward to working with the local community, our volunteers and our project partners to ensure that all the planning and fundraising for this exciting project is achieved over the next twelve months.”

Heritage Lincolnshire will be carrying out research, recording and surveys until spring next year and it is hoping to start work by the end of 2017 or early 2018.

SWINESHEAD PRE-SCHOOL
Not far from Kirton is the village of Swineshead, which boasts an award-winning pre-school that has been running for more than 30 years.

Judged “outstanding” by Ofsted, at its last inspection, Swineshead Pre-School Centre in North End has a happy, cohesive, knowledgeable and multi-talented team and a manager that has won awards for being inspirational and community-spirited.

The play group started off based in an old tin hut in the village, but moved up to its present site in 1985 – into an old land army hut which had been used as temporary accommodation for Italian prisoners of war.

Current manager Carolynn Fletcher joined in 1995, working every other Tuesday, and became supervisor in 1999.

In 2003 the pre-school expanded to take in two-year-olds and offer full day care and it just became busier and busier.

“We had approximately twenty-four children in 2004 so we decided to bid for a lottery grant which was successful and allowed us to open a brand new purpose-built building in North End,” said Carolynn.

“In 2006 we rebranded and Carolynn became the manager of Swineshead Pre-School Centre so we could take fifty-four children, because it was about education, and we wanted to focus on learning through play.”

Three years later the centre expanded again and had sixty-five children on its books.

“We have never really looked back,” said Carolynn.

Awards started to come in thick and fast and in 2013 it was the first pre-school in the county to do the Food for Life partnership for early years.

It was also one of the first eight pre-schools in the UK to be awarded an Inclusion Quality Mark and in July 2013 it was ranked outstanding in its Ofsted report.

More accolades followed, with Carolynn picking up two Manager of the Year awards, an outstanding contribution to childcare award and an award for being one of the most inspirational people in childcare.

Now it has embarked on creating a Forest School so children can learn how to respect fire, learn about the outdoors, grow vegetables and learn how to whittle a piece of wood.

“It’s a positive opportunity for the village to use it and my vision has always been to improve each year. We constantly strive to reach the pinnacle to maintain our outstanding provision.”