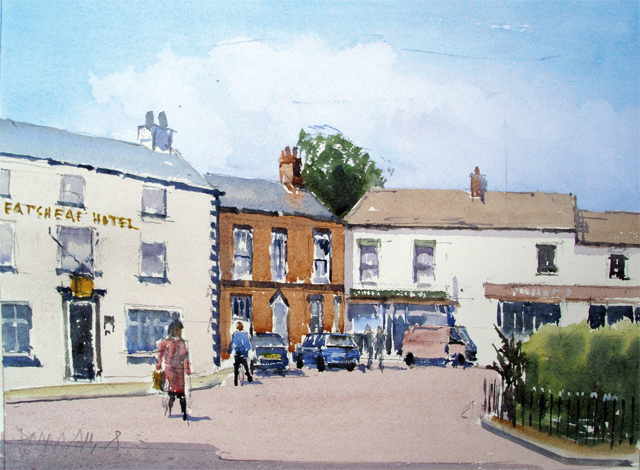 Life pays a visit to Swineshead

With a history steeped in crime and intrigue, the modern day village is a pretty, bustling rural community.
This thriving market town stands on a triangular patch of land located between the main A17, A52 and A1121 roads, about six miles west of Boston, on the edge of the Lincolnshire Fens.

Today the village has a population of just under 3,000 and boasts a vast array of facilities and amenities, many of which are centred around its war memorial, set in the heart of the Market Place, and overlooked by the impressive parish church of St Mary the Virgin.

Delving into the history books of Swineshead it would seem that the village is best known for having been the place where King John spent his final nights in 1216, while making his journey across The Wash. As legend goes, the King, having already lost his crown jewels in the sea somewhere near Sutton Bridge, is said to have stayed at Swineshead Abbey where he was reputedly poisoned by one of the monks.

Swineshead St Mary’s Abbey was founded in 1135 by Robert de Greslei, who endowed it with 240 acres of land and eleven monks were sent from Furness Abbey to run it. The Abbey was closed in 1536 as part of the Dissolution of the Monasteries, ordered by Henry VIII, who at the time wanted to get rid of papal authority, while he established the Church of England and in turn granted himself a divorce from Catherine of Aragon, who had failed to produce a male heir. The first documented re-use of the Abbey site has been recorded as early as 1607, when a farmhouse was built on the monastic ruins.

Swineshead is believed to take its name from an inlet or channel, known as the Swin, which ran up into the Market Place from the sea. The water would have been much closer then, and the limit or head of the water was naturally called Swins Head – hence Swineshead.

Historians believe that Swineshead was able to flourish so well and grow into a busy market town because of the location of the Abbey. Records show that in around 1292/3 the Abbot of Swineshead was granted a licence to hold an annual fair on 2nd October. And at one time, probably because of the market and its influence, there were eighteen pubs and beer houses in the village, which were regularly frequented by the traders and farmers as they went about their business.

Markets were held every Thursday during the Middle Ages and the old stocks and butter cross remain in the village as a reminder of its former status. Other clues alluding to its thriving past include Cheese Hill, which takes its name from the cheese that was sold on the site during the market’s existence.

Another interesting street name is Tarry Hill; so called because of a large family who once lived in the area – with parish records referring to the baptism of the twenty-seventh child of William and Sarah Tarry.

A well-known character who crops up in the history of Swineshead is the infamous cat burglar Robert Augustus Delaney, who lived there for a time while married to a local lady. Delaney is credited with being the first such ‘light-fingered’ thief. It is said that the two main tools of his trade were a length of black silk rope and a long slender tool, which he used to undo latches. Dressed in formal evening wear, Delaney would use the rope to scale wealthy homes and then sneak in to steal whatever he could. He was apprehended by Scotland Yard in 1924 and spent four years in jail, after which he was arrested and convicted multiple times. On his first release from prison he returned to Swineshead with the sole intention of robbing wealthy businessman William Golding. However, Delaney was caught within twenty-four hours and masses of people mobbed Boston courthouse just to catch a glimpse of the now infamous sneak-thief. His life of crime has been well-documented in a book by local historian Pamela Southworth.

The history of the Georgian Wheatsheaf Hotel, which is located in the Market Place, has been traced back to the early 1820s, when coaches would stop there to pick up a guide to lead them over the boggy terrain to Spalding or Sleaford, depending on their direction. The land had yet to be fully drained and strangers would easily lose their way. Later on, coaches would also leave their mailbags at the Wheatsheaf and it was from here that villagers would collect their letters – in effect the hotel was Swineshead’s first Post Office. In the twenty-first century the impressive building bills itself as offering true Lincolnshire hospitality with comfortable accommodation and an excellent menu.

Today the village boasts many facilities including a Post Office, bakery, fish and chip shop, a new medical centre, two grocery stores and a couple of public houses – including the Wheatsheaf, the Pig and Whistle and The Barge, at Swineshead Bridge. While down Coles Lane there is also a pretty, tranquil duck pond.

Proudly standing opposite the Market Place is Swineshead’s parish church of St Mary The Virgin. Built in the thirteenth century, the historic building contains many interesting artefacts including an ancient altar slab, which is believed to be around one thousand years old. The chancel wall is also part of a memorial to Sir John Lockton, who bought the Abbey lands following the reformation. It not only commemorates his death, but that of many of his children who died during infancy; they are each depicted carrying a skull. The chancel was rebuilt in 1847 but the rest of the building is of the Decorated period. The tower is capped by a lantern and short spire which are considered local landmarks.

There is a strong sense of community spirit in Swineshead with numerous social groups and clubs that meet regularly. Weekly dances are held in the village hall and there is also a bowls club, badminton club, pigeon club and Swineshead Institute Football Club, to name but a few. Villagers are also in the process of forming a committee to organise events to mark Queen Elizabeth II’s Diamond Jubilee next summer.

The village also has its own band – Swineshead Silver Band – which was first formed in 1886, although in its earlier years it was known as Swineshead Brass Band. Its first ever public performance that year was playing Christmas carols in the village, a tradition it still proudly upholds. It is completely self-funded, raising money through donations, subscriptions or playing fees and is active throughout the year performing at garden fetes, indoor concerts, church services and carol events, as well as taking part in national brass band contests.

As you can see, Swineshead is a picturesque village with a rich and vibrant history and an equally exciting future to offer all its visitors.

HIDDEN GEM
The unique character of Swineshead has made it a hidden gem of Lincolnshire. House hunters have been known to come across Swineshead by chance, be entranced by the village and be captivated to stay by the more attractive property prices.

It is foremost a thriving village which boasts many amenities other Lincolnshire villages have lost. There are two long-established public houses, the Wheatsheaf and the newly re-opened Pig and Whistle. Both are on the Market Square which is the setting for Swineshead’s Christmas celebrations. Santa pays a visit, the band plays and there is carol singing. This year the event is being held on Friday, 16th December.

This month there is a second Halloween Fundraising Ball planned in aid of the village’s LIVES First Responders team. It will be happening in the Village Hall on Saturday, 24th October.

Arts Coritani is a local gallery hosting work from local and well-known artists which attracts customers to its shows from a wide area. They are also welcoming to anyone locally who would like to pop in for a cup of tea and a chat any Thursday afternoon.

As to those other outstanding amenities, there are many local clubs and societies. A football club and bowls club are situated in close proximity to each other, while a primary school, a day nursery and youth club keep young people focused in their local community.

Swineshead can still boast of a local post office, doctor’s surgery and chemist. There are thriving independently operated retail businesses: the bakers, a fish and chip shop, two hairdressers and general stores. Other businesses include a farm shop, garden centre and pet supplies store.

If pub accommodation is not for you, Swineshead Hall stands in large grounds in the centre of the conservation area heart of the village and offers luxury accommodation, private dinners, lunches and a warm welcome.

Add to this the beautiful landscape surrounding Swineshead and you can see why this village, where you can witness some of Lincolnshire’s best ‘big skies’, is a cherished home to its community.