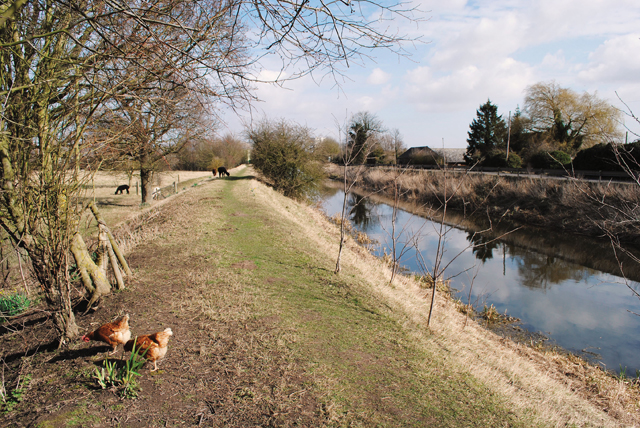 Light and Llamas on the River Glen

The old Holland subdivision of Lincolnshire is sometimes overlooked in terms of what it can offer the walker and amateur historian. After all, it has to be recognised that few English landscapes have changed so much over the centuries.
However, there’s still quite a lot of natural and historical interest in one of my favourite short walks in south Lincolnshire, which follows the River Glen for a few miles and connects the ancient villages of Pinchbeck and Surfleet. It is also part of the Macmillan Way, named after the well-known cancer charity which does so much good work. This walk has something to offer all year round, although it might be argued that the spring is possibly the best time.

I began my walk at Pinchbeck Wood, a relatively small, yet significant wood on the western edge of the village. There is a useful area to park a couple of cars off the road at the northern entrance. This site is owned by the Woodland Trust, a nationwide organisation which is not only preserving our existing woodland, some of which is very ancient, but also doing its best to create new ones, and especially so in this year of the Queen’s Diamond Jubilee.

Pinchbeck Wood was planted over ten years ago and is now coming nicely into maturity; a fine mix of native species such as alder, willow and birch, plus the occasional example of others, such as oak. These native species would have once formed small areas of woodland or copses throughout the fenlands of Lincolnshire, before it was drained several centuries ago. This type of woodland is mentioned in the Domesday Book of 1086 in the references for south Lincolnshire.

At Pinchbeck Wood, you are relatively free to roam as you wish, but there is a path directly through the wood, as well as one around the eastern edge. During my most recent visit in mid-March, the daffodils were coming out and there was a great show in sight and sound from the woodland birds, such as blue tits and great tits, as well as robins and rooks.

From here at the northern end of Pinchbeck Wood, I walked eastwards along the road, turning sharp right at the next junction which led me to the River Glen, where I went through a stile and on to the bank which gives some lovely views of this river. It also brought an unusual encounter with a small herd of llamas — yes, llamas! Slightly incongruous perhaps, but a delight even so. By the way, these animals did back away from me as I approached, so I don’t think the walker needs to be too cautious.

The name ‘Glen’ is considered by some to be unusual for this part of eastern England, but may hint of ‘Celtic survival’ after the Anglo-Saxon invasions of the fifth and sixth centuries. There are many river names in England which have retained their older names, despite the invaders renaming all the villages through which the rivers ran. In fact, Pinchbeck was probably renamed twice within a few centuries, as ‘beck’ is a Danish-Viking word for a stream or small river, by the later invaders who settled and intermingled with the English in the ninth and tenth centuries.

Along this short section, leading up to the road bridge, it is relatively heavily wooded with bushes such as hawthorn. You might come across the odd angler here during the fishing season, a reminder that this is a great fishing river, too.

Once I got to the bridge, which is occasionally busy with traffic, I followed the sign, walking past the temporarily closed, yet attractive thatched pub until I came to the Spalding to Lincoln railway line. Clearly, you have to negotiate this with care, first of all climbing a stile and checking in both directions before crossing. Once through, the land either side of the river opens up nicely, revealing some of the most prime agricultural land in the whole country. Yet, despite the intensity of farming, you can still sometimes hear the wonderful voices of birds like the sedge warbler, usually hidden among the reeds which line the river in spring and summer.

I soon came to a much smaller road bridge, again shaded by trees and bushes, entering a different section of the Macmillan Way path which led me out north-eastwards from Pinchbeck. Along here, I came across several people walking their dogs, a reminder to those who might be frightened by these four-legged inquisitors!

About midway along this section, I paused to admire a couple of mute swans sailing slowly in my direction. The river straightens somewhat after this and I was greeted by a large field of daffodils, full of farm workers busy in the early spring sunshine. Agriculture, as every Lincolnshire person knows, is the prime activity within the county, yet so much has changed, even in recent years. I can still remember these fields being full of tulips later in the spring, such a spectacle that bus loads of tourists used to visit the area from miles away just to see it. But the sight of a field of tulips is a rarity now.

As I continued the famous ‘leaning tower’ of Surfleet came ever more clearly into view. The spired parish church of Saint Laurence has stood sentinel here since medieval times, and probably began to lean soon after the tower was built.

Considering the nature of the soil in this part of the world, it’s perhaps surprising that more of Lincolnshire’s churches don’t lean. Buildings of such size had to have their foundations strengthened by wooden piles being driven into the ground, a measure intended to prevent them giving way to the massed weight of stone above. Nevertheless, such ‘imperfection’ on show at Surfleet does add a certain interest and a topic for many a conversation!

I could hear the traffic of what was once the A16 main road through Surfleet getting closer. There was also the tantalising sight of not one, but two pubs across the river. The name of Surfleet, unlike Pinchbeck, is of Anglo-Saxon origin, ‘fleet’ being an old English name for a stream; the same stream, of course, which runs through Pinchbeck, testimony to the various peoples who populated England early in its history. The meaning of ‘sur’ is not entirely clear but it could mean ‘sour’. So the earliest inhabitants might have seen the River Glen as a ‘sour stream’.

However, there is nothing sour at all about Surfleet these days, a small, straggling village which continues eastward along the Glen towards the sea. The village comes alive every year in late April and early May, with the annual spring festival – what we used to call ‘tulip time’ in these parts. I always make a point of visiting the wonderful church around then to see the floral and other themed displays, often done by local children. There is also a nice cafe in the church grounds serving refreshments, where local artists show their work.

Suffice it to say — it being lunchtime on a very fine, if rather cool spring day — I took the opportunity to sample some English beer and Lincolnshire fare at one of the two pubs, which stand almost side by side. It would be unfair of me to say which pub I chose, but let’s say I had sufficient time to reflect on my short walk along part of the Macmillan Way, which always reminds me so much about the history of the area, both ancient and more recent. An hour later, I exited into sunshine and began my short trek back along the River Glen.