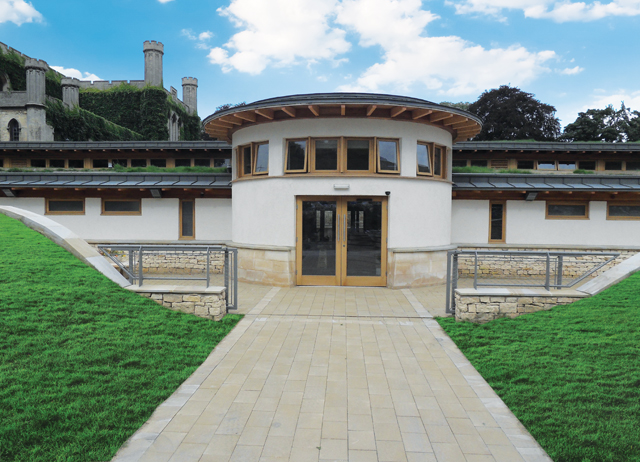 After many centuries of turbulence it is not surprising that the time has arrived for major refurbishment of the Lincoln Castle walls – along with other parts of this unique historic building.
Having played such a huge role in the making of history from the time of the Conqueror, this superb example of Norman craftsmanship is itself now gaining some benefit from changing fortunes. Throughout many sombre interludes brought about by stormy times, the complex has seen much service but it is now profiting from its own considerable facelift. Today, the winds of change are alive with the sound of craftsmen’s tools and the laying of future plans for the further education for us all.

This extensive programme is scheduled for completion by the end of 2014 – in time for the 800th anniversary celebrations of Magna Carta in 2015. It truly is a remarkable refurbishment programme worth £22 million and incorporating many different facets of building restoration, regeneration, archaeology and new enterprise. Not least of these new ideas is the creation of the first new building within the Castle for a century and a half. The Heritage Skills Centre is a purpose-built structure that exudes craftsmanship at every turn. It’s no real wonder either, for this building is intended to fulfil a role in the provision of craftspeople for the next generation.

On a national basis, the training of craftspeople is insufficient to provide the numbers required to guarantee the survival of our nation’s heritage stock. This fact in itself is quite alarming, so much so that back in 2005 the tourism development manager, Mary Powell along with Councillor Eddy Poll had a meeting with Carol Hidschuster, the Cathedral works manager. It was discovered that the Cathedral employed twenty-six skilled workers and so the idea was mooted for the creation of some new agency at the Castle for the preservation of traditional skills there too.

Old skills need to be passed on and over time the decline in the learning of traditional art forms has resulted in a lack of heritage skills throughout the country.

The idea of a skills centre was put forward and eventually adopted with the final result now to be seen in the Castle grounds, which Viscount Linley officially opened on 13th February this year. It is located in the area that was once the Castle car park and before that it was the exercise yard for the debtors held in the prison.

The County Hall, which has since become the Crown Court, was built in the 1820s and this led to the problem of decorum and security for staff at both the court and the prison. The solution came by way of a large retaining wall being built to confine the debtors to a new exercise yard four metres below the level of the Castle bailey. Situated on this much lower level, this sunken area proved to be the ideal place to build the new Heritage Skills Centre.

The challenges were apparent from the beginning. The structure had to provide a pleasing contribution to the Castle complex architecturally and at the same time it had to blend in with the surroundings in an unobtrusive manner.

With the roof being on the same level as the Castle lawns it was decided to incorporate a grassed roof to the new building and this blends seamlessly with the grassed expanse when viewed from the Castle walls. As a building designed for the quality training of craftspeople, it was imperative that the building too was inspirational.

It is constructed of quality natural materials. Above the plinth, the walls are made of a mixture of lime and hemp formed into panels. It is known as hempcrete and it is finally given a coating of lime render. The finished product gives very high levels of insulation.

Rather than the traditional use of steel for the framework of columns and beams, a product called ‘Glulam’ has been used. It is considered very sustainable and it is strong enough to support the turf roof, which does involve a substantial weight. The grass is irrigated by rainwater collected from the prison roofs.

Heating is provided by means of an air source heat pump. This ingenious contraption absorbs heat from the outside air and transfers it to an under floor water circulation system.

Particular attention has been paid to the lighting of the work areas inside. The grass roof is ‘stepped’ at its central point allowing for shaded south light into the workshops and good quality north light enters through high level glazing. The workshops are divided into two ‘L’ shaped areas aligned along the northern elevation. One is intended for clean and ‘dry’ trades such as stained glass, felt, lace and willow basketry whilst the other is for the dusty and ‘wet’ trades of stonemasonry, mortar and plaster work etc.

It was interesting to learn from Mary Powell of the plans in the near future for the tapestries from Doddington Hall to be brought to the Heritage Skills Centre and fully refurbished here. During visits the public and schoolchildren will quite possibly be able to view this work as it is in progress through large glass windows that divide the workshops. Blacksmithing and silversmithing are also taught here with the usual facilities provided. Nothing, it would seem, is left out in this wonderful emporium of age-old heritage knowledge.

The Skills Centre is certainly no mean achievement and it did come at a cost. Funding has been provided by the European Regional Development Fund, the East Midlands Development Agency and the Lincolnshire County Council. The Heritage Lottery Fund operates a ‘Skills for the Future’ programme and this has paid for some of the equipment. Some funding too was provided by Social and Local – a community interest company, for the supply of some tools. Support and advice was never in need, as agencies including Lincoln College of Art and Design, the University of Lincoln, Bishop Grosseteste University College and Lincoln Cathedral Works Department were all on hand throughout the venture.

As one would expect, this remarkable building has not gone unnoticed throughout the construction world and it has been nominated for several awards. Not least of which was that of Project of the Year in the Committed to Construction in the East Midlands Awards 2013. Following this, it won Best Small Commercial Building in the Local Authority Building Control’s Regional Building Excellence Awards. This latter award means that the Heritage Skills Centre now goes forward into the national awards in November.

Further accolades have come in the shape of New Build of the Year at the National Federation of Builders Annual Awards and a short-listing for the SCALA Civic Building of the Year competition.

The Heritage Skills Centre is without doubt going to go a long way toward supplying much of the skilled workforce needed to repair, refurbish and service our priceless stock of historic properties. Of the courses already taken and enjoyed, the overwhelming feedback is one of great interest and the wish to learn more. Skill levels vary from person to person and it appears that those who have some knowledge invariably want to go on and learn more.

The educational ability levels here allow for varying grades and incorporate basic taster courses of half a day or one full day right up to NVQ and heritage level. Plans are in place for school visits in order to get hands on experience for children and older students. Opportunities will be there to not only watch demonstrations of many old trades but to try them out too. Maybe in the future, we will see a new era of school leavers, many of whom will have specified a wish to take up a career in heritage skills. Let us all hope so.