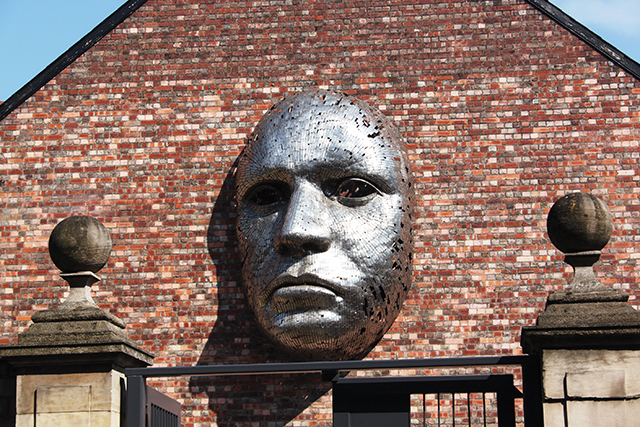 Lincoln Drill Hall, which is located on Broadgate and runs all the way through to Free School Lane, was opened in 1890. Although purpose-built for military training, community and social events were held in the hall from an early stage.
It was designed by architects Goddard and Son for the 1st Lincolnshire Rifle Volunteers and the construction was financed by Joseph Ruston. The 1st Lincolnshire Rifle volunteers evolved to become the 4th Battalion of the Lincolnshire Regiment in 1908.

The battalion was mobilised at the Drill Hall in August 1914 before being deployed to the Western Front. The 4th Battalion was reconstituted after the Second World War and amalgamated with the 6th Battalion to form the 4th/6th Battalion in 1950. In 1967 the Lincolnshire Regiment became part of the Royal Anglian Regiment.

Various forms of entertainment have been held in the hall over the years. Perhaps the most memorable was a gig by The Rolling Stones on New Year’s Eve 1963 – the following day they made their debut on Top of the Pops. For a number of years, mid-20th century, the hall was used by the Lincoln City Football Supporters Club for fundraising purposes, particularly bingo.

The building continued to be used for military training for some years but increasingly fell into disrepair and closed in 1999. However, as a result of public demand, it reopened four years later following a £2.6 million refurbishment programme, facilitated by the City Council, the principal contractor for the work being Lindum Construction. In 2010 the City Council passed day-to-day control to an independent charitable trust.

The Drill Hall is now a multi-purpose, arts and entertainment complex – the main auditorium has a capacity of around 500. It has hosted bands and orchestras, theatre performances, literature talks, films, the Red Herring Comedy Club, workshops and business meetings. My own particular favourite is the New Year concert by the Lincoln Symphony Orchestra. I also saw a performance of Cats in the summer of 2019 which was also very good. The Drill Hall has been home to the Lincoln Beer Festival for some years, which works well. There is a cafe/bar serving a range of drinks and snacks with outside seating for the better weather.

JOSEPH RUSTON (1835–1897)
Joseph Ruston was the son of Robert Ruston, a farmer from Chatteris, and his wife Margaret. After leaving Wesley College, Sheffield, he became an apprentice at the Sheffield cutlery firm of George Wostenholme. On completion of his training and having a modest inheritance from his father’s estate, he went into business with Burton and Proctor of Lincoln. Very soon he became head of the firm Ruston, Proctor and Co. agricultural engineers and implement makers. The company grew in size until it employed 2,000 people and in his lifetime produced in excess of 20,000 engines, 19,000 boilers and 10,000 threshing machines. The firm became Ruston and Hornsby in 1918, after his death.

Ruston was Mayor of Lincoln in 1869/70 and a Justice of the Peace for the City. He was elected as a Liberal MP for Lincoln in a by-election in 1884, re-elected in 1885 but did not stand again in 1886 because he disagreed with Prime Minister Gladstone’s policy for Home Rule. He was appointed High Sheriff of Lincolnshire in 1891. Ruston was a generous benefactor to the City of Lincoln.

In addition to the funding of the Drill Hall he also paid for a children’s ward at Lincoln County Hospital and for the restoration of the monument in Lincoln Cathedral to the memory of Queen Eleanor. He married Jane Brown in 1859 and they had a son and six daughters.