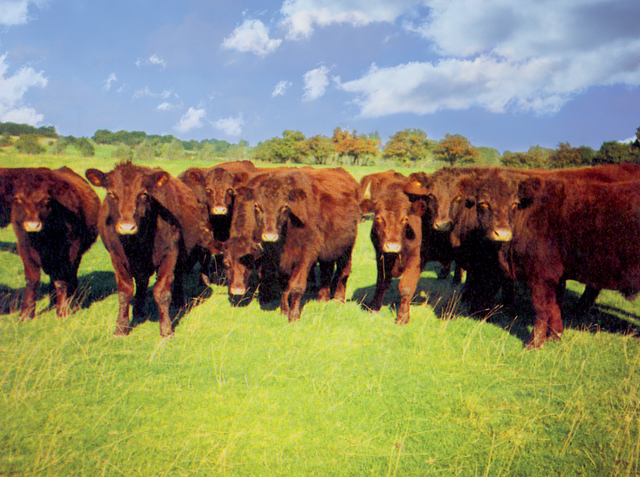 Over 300 years ago, Gervase Markham, in his book, A Way to Get Wealth, wrote of Lincolnshire cattle, ‘their horns little and crooked, their bodies exceedingly tall, long, large, lean…’ The modern Lincoln Red has come a long way since then and is a far cry from the animal described by Markham.
For today’s consumer the key word is ‘traceability’ and Lincolnshire farmers have been at the forefront of developments in that area. The Lincoln Red Cattle Society was amongst the first to use herd books and introduced the first independently observed beef recording scheme. Most breeds of cattle have improved over the years and many of them owe this to the pioneering work of the Lincoln Red breeders.

Little is known about the history of Lincolnshire cattle before Markham’s book of 1695. During the late eighteenth and early nineteenth centuries a number of Lincolnshire breeders, most notably Thomas Turnell, brought in cherry-red Durham and York shorthorn bulls and heifers of medium size, some from the well-known herds of Robert Bakewell and the Collings brothers. These animals were crossed with the local large, rugged draught cows to improve conformation. The resulting cattle soon became known as the Lincolnshire Red Shorthorn. In 1799 the breed was described by the Board of Agriculture as ‘a breed of cattle which are unsurpassed in this country for points highly valuable.’

The earliest record of Lincoln Reds being exported is in 1893, when the Argentine Lincolnshire Red Shorthorn book was created. From 1904 to 1914 a total of 774 cattle were exported to twenty different countries. In recent times Lincoln Reds have been exported to countries all over the world, including Argentina, Australia, Brazil, Canada, Germany, Hungary, New Zealand, South Africa and the USA.

By 1926 the Lincoln Red Shorthorn was the second largest breed of pedigree cattle in England. Over time, selective breeding resulted in two distinct types of beast, beef and dairy. Although the Lincoln Red was an excellent dairy animal – cows achieving very respectable yields and winning many prizes – the emphasis on beef became more marked.

Today the Lincoln Red has all the essential characteristics of a beef breed, but has retained, from its dual purpose days, a high milk yield, vital for fast growing progeny.

In the 1940s Eric Pentecost, from Cropwell Butler in Nottinghamshire, began work on an experiment which at the time did not meet with universal approval, to create a Lincoln Red Shorthorn without horns. After many years of determined effort the objective was achieved by crossing a hornless red and black Aberdeen Angus bull with a Lincoln Red female.

In 1960 the word ‘Shorthorn’ was dropped from the breed title and the name ‘Lincoln Red Cattle Society’ was adopted. With the importation of continental cattle breeds in the 1970s and ’80s the Lincoln Red, along with many other indigenous breeds, started to lose its popularity. But the Society initiated a breed development programme, crossing Lincoln Red cows with selected European breeds to improve conformation and increase lean meat content.

The programme has been very successful and the main characteristics of the breed have been retained. As in earlier centuries, selective breeding continues and we now have a productive, easy care, suckler cow which is well suited to the stringent demands of modern beef production. It is also a feed efficient animal and a good converter of forage, which easily adapts to regional grazing and climatic conditions. Lincolnshire people can be proud of the Lincoln Red and fully support the Society with its slogan, ‘the traditional breed that meets the needs of the 21st century.’