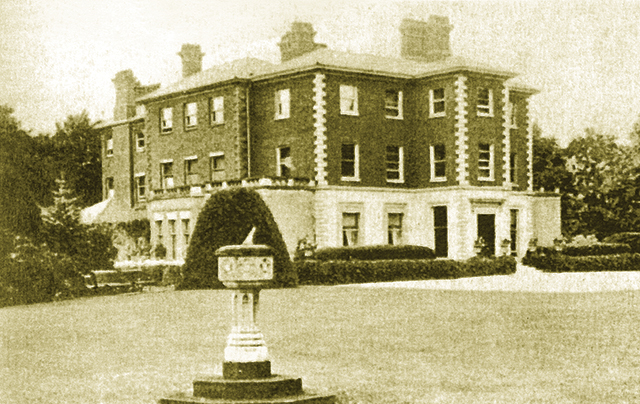 Lincolnshire Life looks at buildings that are no longer with us, having been demolished decades ago.
THE BOULTHAM PARK ESTATE
The Boultham Park Estate was acquired by Richard Ellison III as a wedding present for his illegitimate son, Colonel Richard Ellison, in the early 1800s. The estate underwent a period of development under the Colonel, who was a Justice of the Peace and Deputy Lieutenant of Lincolnshire.

In 1857 a large ornamental lake was excavated. The hall was rebuilt on a larger scale in 1874 and was thrown open for garden parties, galas and fetes. Some of the decorative features included a neo-gothic sundial, a bird bath which is now in St Helen’s Church and a large monument to a horse called Simon which is now in nearby Simon’s Green. Upon Col. Ellison’s death in 1881, Boultham Hall passed to his son Lt. Colonel R G Ellison, who died in 1909 after which the hall became vacant.

During the First World War the hall served as a convalescent home for wounded soldiers. The hall and gardens were bought by the City Council in 1929 and the grounds were laid out as a public park. During World War Two areas of the park were planted with sugar beet as part of the ‘Dig for Victory’ campaign. After the war much of the land was sold for housing. There was a plan to convert the hall to a home for the elderly but this did not happen and the hall was demolished in 1959.

In those days the grounds were far more extensive than they are today, with an access road off High Street running parallel to Dixon Street. The gatehouse to this road is now a sofa and bed shop opposite Smith Street. Boultham Park Road was a private road. The Boultham Park restoration project is a £3.7 million enterprise to restore the fifty-acre Grade II listed park to its former glory.

EASTCLIFFE HOUSE AND MONKS MANOR
It was probably because of the large concentration of the educated elite in uphill Lincoln, as well as the glorious views over the City and the new industrial units which were springing up, that the area between the cliff edge and Wragby Road became the principal area for the homes of the factory owners and their senior managers and professional advisors. Many of these houses were large isolated villas standing in substantial grounds but the grandest of all were those of the founders of the two largest engineering works in Lincoln.

Nathanial Clayton, who with Joseph Shuttleworth established the world renowned engineering firm Clayton and Shuttleworth, built Eastcliffe House between Sewell Road and Lindum Terrace in 1877 at a cost of £40,000 to £50,000 (equal to over £4 million today). The house became known locally as ‘Natty Clayton’s Mansion’. It was demolished in 1926.

Joseph Ruston, who gave his name to the Ruston engineering empire, also famous throughout the world, built the even larger Monks Manor between Greetwell Road and Wragby Road in 1870. The design was said to resemble Osbourn House, Queen Victoria’s country house on the Isle of Wight. Charles Pratt, the wine merchant, bought Monks Manor in 1912 and lived there until his death in 1932, when it was pulled down. Both Eastcliffe House and Monks Manor compared favourably with the finest country houses of the period and were testimony, if any were needed, of their owners’ status as Victorian Captains of industry and industrial giants in the City of Lincoln. Joseph Ruston was Mayor of Lincoln in 1870 and MP for the City from 1884 to 1886. Nathanial Clayton was High Sheriff of Lincolnshire in 1881. Both men were Justices of the Peace for Lincoln.