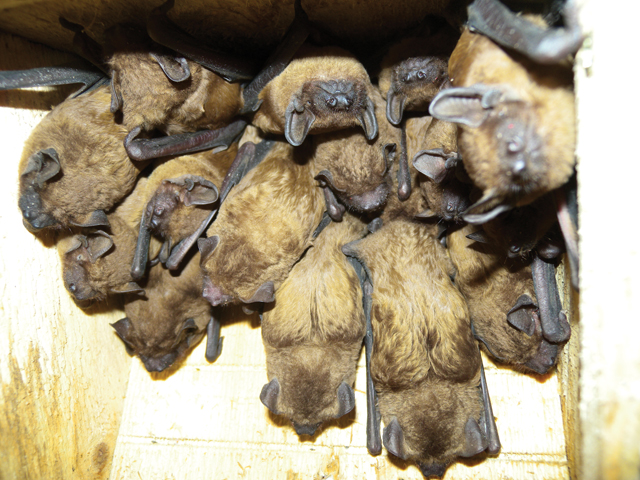 Very little is really known about bats, yet these little mammals seem to have developed quite a reputation – unfortunately for all the wrong reasons.
Common misconceptions include that they are blind, they drink blood and are prone to flying into people’s hair – none of which are true. But it is mistaken beliefs like these which the Lincolnshire Bat Group is working hard to eradicate.

This voluntary organisation was formed back in 1983 to help raise awareness and educate people about bats by giving talks and organising bat walks and attending shows.

There are eighteen bat species native to Britain of which eleven are found in our county and members also record their distribution, survey roost sites, take care of injured and abandoned bats, releasing them back into the wild as well as involving local schools and other groups in their activities.

The group currently has eighty-five members countywide from a range of backgrounds including professional ecologists, and those who just have a general interest in bats.

“Bats are wonderful to watch, yet so little is really known about them,” says chairman Richard Green, who works with children at a wildlife centre. “The only chance people really get to see them is if they go out in the evening.

“In the past bat populations have been greater than they are now. Once large roosts were widespread throughout the county but there are far fewer now, and that goes for all the species right across the country.

“It’s down to a combination of factors such as changes in farming practices, loss of habitat and loss of suitable places to roost.

“I don’t think everyone fully understands all of our species are insect eaters – if we lose bats from our environment there’s going to be a huge implication.

“It has been estimated that pipistrelles can eat up to 3,000 small insects a night – with less bats that’s a huge number of insects not being eaten and in many cases these insects are pests.

“There’s still a lot of research needed, but some carried out in the USA suggests that bats save over £2 billion to the corn growing industry – because of the insect pests they eat,” adds Richard.

Bats can live anywhere from ten to thirty years, which is a long life span for a small mammal, but their population is still dwindling.

“Bats are slow to reproduce. The pups weigh a third of the weight of an adult so they only have a single pup in a year. Even that may not happen if conditions are poor. This means that any damage to the bat population can take a long time to recover,” explains Richard.

“In Lincolnshire the range of habitats and the numerous waterways provide excellent habitats. On the other hand, the lack of woodland and hedgerows due to large scale arable farming is less good for wildlife, so gardens with a pond and a range of different flowers and plants can be like a little reserve to many creatures. When it comes to planning, planting a range of evening and night flowering plants attracts insects which provide food for bats.”

All bats and their roosts are protected by law and some group members are recognised as bat wardens by Natural England – the body acting as the government’s adviser for the natural environment in England – and hold a licence enabling them to investigate roosts on the authority’s behalf. This includes investigating roosts in peoples’ homes, allowing Natural England to provide appropriate advice to the owners, especially if any building work is to be done which may affect the bats. Here the emphasis is not on stopping development, rather on helping householders to achieve their plans in a way which does not disrupt the bats.

Another aspect of wardens’ work is to survey churches that need work doing to their roofs – sadly, often due to lead theft.

“Bats are endangered and their protection is important. However, they often share our buildings so sometimes this causes conflict. We try to find ways to get around this conflict for the protection of the bats and to the satisfaction of the building owners,” says Richard.

As well as offering advice, group members also man a voluntary Bat Line, collecting injured animals from anywhere in the county, and either looking after them themselves or taking them to someone else who can care for them until they are ready to return to the wild.

More recently members helped with the clean-up operation at Tattershall Church which is home to the county’s largest roost – and around 800 bats.

“It’s an enormous bat roost and absolutely amazing – it’s probably the most important in the county. We go and help clear up the mess a couple of times a year. As much as we love bats they can be very messy, so we go and help the churchwardens,” says Richard.

“All our work is done by volunteers – it’s all about raising awareness and educating people and we do as much as we can free of charge.

“People need to be aware that if there are bats in their house they do not do any harm whatsoever; they do not chew through boards or wiring and even their droppings are harmless in most cases.

“There are a number of modern building practices that are not helpful to bats. These include the widespread installation of UPVC soffits and bargeboards which prevent bat access, and breathable roofing felt, which is made of a fibrous material that has been shown to entangle bats leading to their death. There are many such issues that are giving us cause for concern.

“But we’ve got lots of exciting things happening in the New Year, such as a hibernation survey which we’d love more people to help us with.”

Lincolnshire Bat Group meets quarterly at the Admiral Rodney, Horncastle. For more information about the group’s work or how to join, visit its website www.lincsbatgroup.co.uk

Anyone who finds a bat roost in their property, or while carrying out development work, should contact Natural England on 01522 561470 or www.naturalengland.org.uk