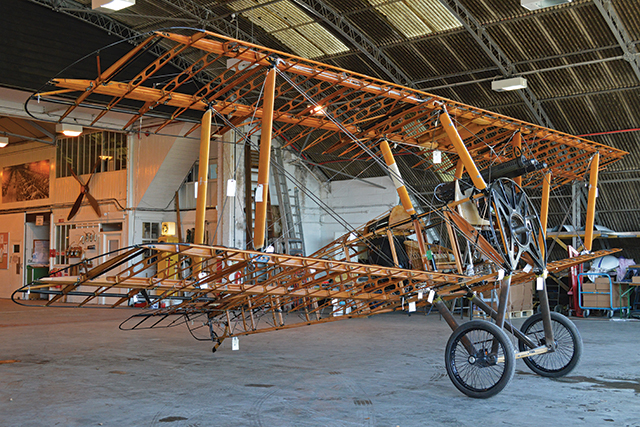 Lincolnshire in World War One: Bastion in the Air

Lincolnshire’s association with military flight began more than a century ago and next year exhibitions in two locations will recreate a Royal Flying Corps Airfield and tell the county’s story of aviation development, production and defence.
Between 5th April and 30th August 2018 the World War Two ‘Dambuster’ Hangar which is part of the Heritage Centre at RAF Scampton will house a unique exhibition which will be part of the touring RAF100 celebrations. Dave Harrigan, Aviation Heritage Manager at Aviation Heritage Lincolnshire described the sight which will greet visitors.

“Anyone who has already visited Scampton will know that this is a large hangar but the tableau we have planned will recreate a grassed airfield showing life for pilots of the Royal Flying Corps during World War One. On entry into the hangar there will be the unskinned fuselage of a replica Sopwith Camel, the single-seat biplane which is probably the most iconic allied fighter aircraft of that period,” he said.

Aviation Heritage Lincolnshire has also been working with partner organisations to bring in two working replica WW1 planes; the De Havilland 2 fighter and a German reconnaissance plane, the Rumpler C.VII.

“These two aircraft will be flown into RAF Scampton sometime in late March which will make a memorable spectacle as they arrive at this historic airfield,” said Dave.

In addition a film, artefacts and storyboards will describe the birth of the Royal Flying Corps, the embryo organisation which later became the Royal Air Force, and its role during The Great War.

The second exhibition will be staged at The Collection in the centre of Lincoln. Running from 26th May to 9th September, the theme will be aviation development, production and defence in the city and county during World War One. Factories with internationally famous names such as Robeys on Canwick Road and Rustons on Tritton Road were enlisted to manufacture to support the war effort. With a large proportion of the male working age population at The Front, women left their homes to work in factories and became the heroines of the Home Front.

“We have many wonderful archive photographs of local Munitionettes, as they became known, working on the production lines and their aircraft were displayed locally to encourage the sale of War Bonds.”

The threat in the air during this time was from Zeppelins and the Royal Naval Service and the Royal Flying Corps came together to set up a joint air defence force. The exhibition will feature a 15ft replica model of a Zeppelin made by Cliff Clover, a resident of Fishtoft, who is a leading model maker and one of the top authorities on Zeppelins in the UK. The model will be lit from underneath recreating the search lights which tracked their progress.

Another lesser known story from this period concerns the large number of overseas pilots who were trained, based and operated from the county, as well as large numbers of German prisoners of war who were sent to take up agricultural work in the Fens around Boston.

A series of lectures to accompany the exhibition and a Wall of Heroes will recount stories of individual bravery and loss.

The exhibition at RAF Scampton will require pre-booking for entry. You can find more information and book tickets at: rafscamptonheritagecentre@gmail.com

The Collection in Lincoln will operate normal opening hours.

A book on the history of ‘Lincolnshire Aviation in World War I’ has been published priced £3, available from partner organisations or direct from Aviation Heritage Lincolnshire via their website www.aviationheritagelincolnshire.com