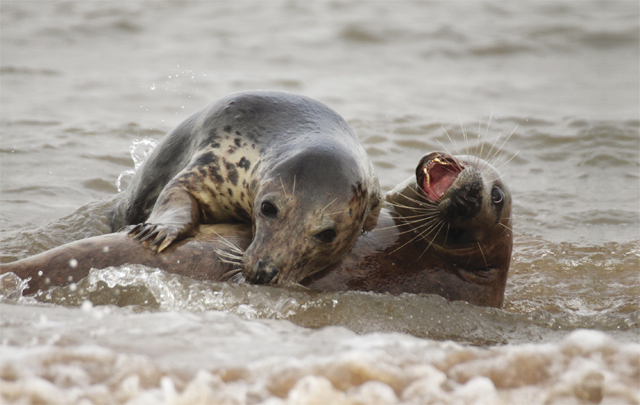 At the end of each year hundreds of locals born in Lincolnshire return to the coastline. But it’s not humans desperate for a cold swim: it’s the Atlantic grey seal.
The seals come in their hundreds to the beach at Donna Nook to form birthing colonies called rookeries. Donna Nook is halfway between Mablethorpe and Cleethorpes and during the week is an RAF bombing range. This doesn’t seem to bother the seals and in some ways gives them the protection of a public free area.

The Lincolnshire Wildlife Trust manages the nature reserve at Donna Nook. Visitors are able to see the colony including new born pups up close during the November and December months. The seals and their pups can be within two feet of you, only separated by a waist high wire fence which doesn’t obstruct your viewing, even for toddlers. The pups are very trusting, especially those left on their own for a short while; although very cute, it’s important not to touch them as your scent could cause their mother to abandon them.

The Atlantic grey seal is also known as the grey seal and has the Greek name Halichoerus grypus – the literal translation is very unflattering: hooked-nosed sea pig. Grey seals are larger than common seals and have a flatter head and wider nostrils.

The bulls weigh up to 350kg and can be up to two and a half metres long; the cows smaller at up to 250kg and two metres long. Female colouring is generally a silvery grey to brown with darker blotchy patches; the males are darker with lighter patches. Seals can dive for up to twenty minutes at a time and feed on a wide variety of fish, crustaceans and sand eels.

The seals begin to come onto the beach at Donna Nook at the end of October each year, starting with a few cows but building up to nearly 1000 by late November. At its peak it is estimated that the beach at Donna Nook accommodates more than 1000 cows, 1000 pups and more than 300 bulls. The breeding cycle is very predictable: Cows give birth at Donna Nook between late October and December. They often become pregnant again towards the end of the four weeks they are feeding their pups and return to sea. They then come back to the Lincolnshire coast eleven months later to give birth and the cycle begins once more. By late December the seal population has returned to sea and the beaches are clear.

Pups are born with a thick soft white fur which is shed within a few weeks. The actual birth is a quick process, over in a few minutes. The pups need to be born on dry land and cannot swim for a number a weeks. Pups born too close to the sea can drown when the high tides come in. They are born at around thirteen kilos and increase up to fifty kilos within the first three weeks due to the sixty per cent fat content of their mother’s milk. The mothers stay on dry land for the three or four weeks that they are suckling their young, so as a consequence of not eating and giving milk its not uncommon for the females to lose a quarter of their body weight during this time – a fad diet in its extreme! Females mate towards the end of suckling their pups and then return to sea. The pup stays at the rookery until fully moulted before going to sea alone, so it’s not unusual to see the young pups crying on the beach wondering where the mother has gone.

When the cows enter the rookeries to give birth, the bulls will start to appear. Fights break out between males who try to assemble up to ten females to mate with. Males and females also fight when the males attempt to mate either too soon with the female, or the bull is not the cow’s choice of mate.

The lifespan of seals in the wild is up to thirty years for males and forty years for females. Their main predators are whales, sharks, fishing nets and man, although culling is now mainly restricted.

There are two car parks close to the viewing area, Donna Nook is just north of the village of North Somercotes on the A1031 and is well signposted. It is well worth a visit for all ages.