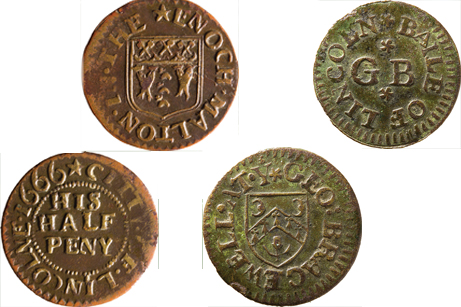 From an Iron Age settlement of small round dwellings at the Brayford Pool in the 1st century BC to the thriving city that is Lincoln today, we now find ourselves in the heart of Lincolnshire.

What outstanding history lies within our boundaries and what did that small Iron Age settlement look like, what did its people look like, how did they live? Well one thing is sure: even then there would have been bartering, trading. There is certainly not enough space within this article to look back that far so let’s leap forward to our 17th-century trading ancestors and take a sneak-peek into their lives.

Lincoln had 34 traders who had tokens struck, there were also several octagonal tokens struck by the city itself such as the Lincolne Citty Halfe Peny and Farthing.

Out of so many Lincoln traders, let us choose just two, beginning with George Bracewell.

This farthing has the inscription: ‘Geo: Bracewell At Y’ around the clothworker’s arms. On the reverse: ‘Baile of Lincoln’ with GB in the centre (George Bracewell).

George was a clothworker/milliner. His place of business was in the bail of Lincoln. He was baptised on 27th January 1618 at St Martin’s Lincoln. His wife was called Elizabeth and they had a daughter, Susanna. George died in 1666.

The simple description of this coin found in reference books is: ‘Geo Bracewell ¼ Clothworker’s Arms.’ The ¼ is of course a farthing but you might be misled into thinking he owned an alehouse! Coin collectors will know that ‘Clothworker’s Arms’ is the emblem in the centre of the coin depicting The Worshipful Company of Clothworkers. This coat of arms is worthy of further description.

Now we move to Enoch Malton, fishmonger. He had a halfpenny struck in his name. The legend reads: ‘Enoch Malton In The’ and on the reverse it reads: ‘Citty Of Lincolne 1666’.

The coat of arms in the centre depicts three pairs of keys of St Peter over some simply drawn fish.

Enoch married Alice Widnall (widow) in 1677 at Thorpe on the Hill.