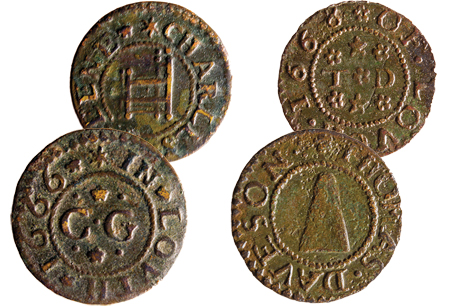 It seems that Louth’s origins began at least in the Saxon period, around the 600s, when it was but a small village. There is talk among local historians that Louth may have once been the site of a Roman fort but hard evidence for that has yet to be confirmed. When the Danes invaded in the 9th century they sacked Louth monastery. Louth streets ending in ‘gate’ such as Eastgate, Ludgate and Northgate are Danish in origin – ‘gata’ meaning street.

Commerce for Louth is recorded in the Domesday Book (1086) which mentions three markets: Louth, Threekingham and Partney. It appears there were no actual shops, all buying and selling was through the local market.

So in these few fragments of recorded history we pick up the thread of Louth’s commercial embryonic beginnings.

Louth had 17 traders who issued tokens. The very first was a farthing by John Chapman, ‘ironmonger’, in 1658. Like so many of these old coins, the only example I have seen of his is in such a poor condition, I have passed it by in favour of two much clearer coins, a farthing of Thomas Daveson and another farthing of Charles Greene. If you happen to come across one of these traders’ tokens in your ‘button tin’ from Louth or anywhere in Lincolnshire, I would be very interested in seeing it.

The strange, elongated pyramidal object in the centre of Thomas Daveson’s coin of 1666 is in fact a ‘sugar loaf’. That little icon indicates that Thomas was a mercer. Mercers quite often traded in other items besides cloth and fine linen.

That sugar loaf provides us with the only clue as to what this trader’s shop supplied. There are, as is often the case, no other records to give us the fuller information we would love to read. Thomas Daveson was a church warden at Louth in 1680 and 1692. Thomas signed the protestant return at Walkergate, Louth. He was married to Elizabeth and they had four children.

Charles Greene’s token shows a rather fine looking chair. Like you I would jump to the conclusion he was a carpenter. We are wrong again! County records of his marriage and property dealings describe him as an ‘ironmonger’. He paid £1 for his admission to the freedom in Louth in 1663 and was church warden in 1671.

So why a chair? This is one of those things that have been lost in the swirls of history.