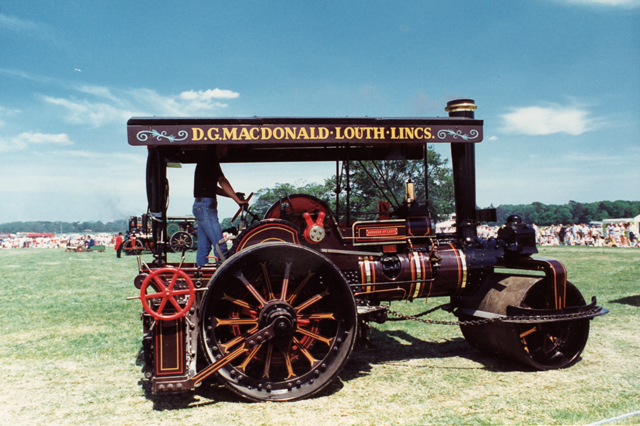 There is no ‘off-season’ in the world of vintage machinery preservation.
During the summer months there is the busy round of shows and rallies, where enthusiasts can meet up and show off their latest acquisitions, discussing current ongoing restoration projects with like-minded friends; in winter there is the hard and dedicated work that goes into the restoration. Many hours are spent in workshops before each project makes an appearance to an admiring public.

Lincolnshire, being the home of many of the major manufacturers of farm machinery, is a county which has its fair share of enthusiasts and annual events filling the weekends on the calendar from spring to autumn. Among these enthusiasts are Glyn Macdonald, who lives near Louth, and Ron Knight, whose home is near Stamford.

Glyn, like all owners, likes to know the earlier history of his various engines. In the case of his Fowler T3B road roller, this did not prove difficult.

The roller was built in 1930 in Leeds. It had been due to be shipped out to India but this was a deal that did not eventually happen, so when it arrived in the yard of Louth Borough Council in 1939 it was still brand new.

The local agent who handled the sale was Evan William Macdonald, his grandfather. The man who unloaded it on its arrival on 1st January, 1939 was Glyn’s father, Dick Macdonald.

The roller spent all of its forty-four year working life with the council. From 1973 it was loaned out, on display with Lincolnshire Steam Engine Preservation Society, and in 1977 was bought by Dick Macdonald.

Dick Macdonald was a founder member of the society, which was formed in 1959, at a time when steam engines were in danger of being scrapped – as they lost their places on the farms to their more modern successors. He was chairman, a role which Glyn Macdonald took over from him. Glyn’s wife, Sharon, is secretary of the Lincolnshire Steam and Vintage Rally which is held annually in August.

Glyn Macdonald has another Fowler road roller, an older model built in 1901. The oldest in his ‘fleet’ is an 1893 Rushden Proctor showman’s engine that was built in Lincoln.

He also has a 1927 Burrell showman’s tractor, with the name plate ‘Nell Gwyn’.

These reminders of the traditional fairground are a big attraction at shows, and Glyn Macdonald has something special to put on display: his 1906 Gasparini fairground organ. This has forty-eight keys and was made in Paris.

Coming to this country it was part of the entourage of a fairground operator who toured towns and villages in the south of England. Its music accompanied the whirling of the chair-o-plane ride.

Nowadays it entertains new generations at many east of England events. Among its outings this summer, as well as the steam rallies, were shows such as that at Winterton, and fetes, such as that at Legbourne, near Louth. It travels aboard a seven-and-a-half-tonne Mercedes box van, an upgrade on its original Ford box van.

Glyn Macdonald’s interest includes all forms of transport, including vans and lorries. Among his collection are two dating from 1930 and 1931, a Huntley and Palmer biscuit delivery van and a petrol-paraffin tanker; both are current restoration projects.

Ron Knight’s time in retirement from a lifetime in farming is mostly spent in his workshop, making an early start each day and taking a break only for lunch with his wife Barbara.

His speciality is in combine harvesters. “I have some that are pre-war, but it is difficult to date them as, unlike tractors, they do not have model numbers,” Ron explained.

“A tremendous amount of machinery was made in Lincolnshire, but during the war probably ninety per cent came from America, at the time when food production was being stepped up as part of the war effort.”

As well as his combines, he has six steam engines: two are Fowler ploughing engines; he has a 100 year-old example, a Rushton Proctor road roller, built in Lincoln – which came to him from Norfolk; a traction engine and portable engine of the later company, Rushton and Hornsby; and a Robey tractor, also built in Lincoln.

Most of the items in his collection spent their working lives locally, and fortunately were spared from becoming wartime scrap metal because of their importance on the farms.

The portable engines were just that: made to be pulled by horses – and later by tractors – to whichever part of the farm their power was needed.

Ron Knight’s grandfather was a blacksmith before he moved into farming and the family still have his own ploughs and horseshoes.

As far as acquiring additions to his own collections are concerned, he has no difficulty.

“I have been collecting for thirty years,” he said. “I don’t need to look for things anymore – they find me. People will ring up and say that there is something they are going to scrap, unless I would like to have it. People like to see these items of their old machinery working again in due course. They become quite nostalgic.”

Many of the spare parts needed are made by Ron Knight himself. When the mechanical aspects of the restoration are completed there comes the paintwork. It is important to him that this should be in the original colours of the manufacturers; he has the colours mixed by a paint supplier, to be as near as possible to those in which the machinery left the factory. For the Rushtons, this is a very dark green; the Robey livery is maroon; and the Fowler, black.

For the nearby Little Casterton Working Weekend, Ron Knight always provides something new for the enthusiasts to admire. His combines are a big attraction, and a farming friend grows for him a special variety of spring-sown wheat, lighter than present day varieties and the type of crop for which the machinery was made; it can therefore acquit itself well.

For Ron, the preservation of such machinery is a daily pleasure. He said: “My philosophy is that, if you are working at something you really enjoy, there is nothing better you could be doing.”